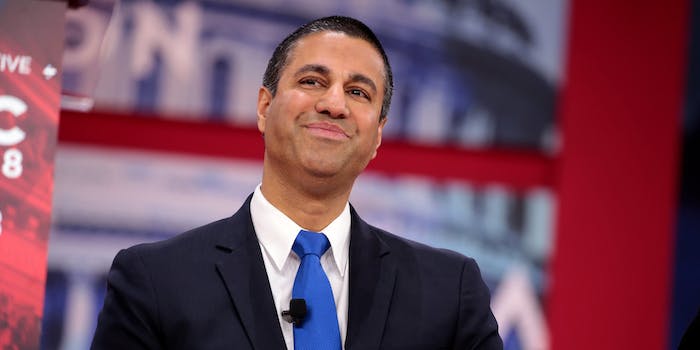 Pai expressed misgivings with an aspect of the court's ruling that net neutrality advocates have hailed.

Federal Communications Commission (FCC) Chairman Ajit Pai is defending the agency’s repeal of net neutrality rules and has spent recent days arguing against states passing their own open-internet laws in a series of interviews.

Earlier this month, the United States Court of Appeals District of Columbia Circuit released a highly-anticipated decision that mostly upheld the FCC’s repeal of net neutrality, but also opened the door for states to enact their own laws in the absence of one at the federal level.

That opening has been called a “huge opportunity” by net neutrality advocates, with one law in particular—California’s “gold standard” legislation—possibly becoming a blueprint for states who want to pass their own in the future. The California law goes farther in enforcing net neutrality standards than the rules repealed by the FCC.

Pai this week tried to push back against the idea, saying a number of state-level internet laws would create market uncertainty, according to CNET.

“When you’re talking about the choice for a venture capitalist or an entrepreneur to set up shop in the United States where they have to get permission from the federal government or from the state of California, San Francisco, or some other jurisdiction, or whether they should set up shop in country B where there’s a uniform, well-established set of regulations that are consistent, I worry that the proposition value for country B will become stronger over time,” Pai said, according to the news outlet.

The FCC, under Pai’s leadership, repealed a “well-established set of regulations” when they undid the 2015 Open Internet Order, a decision that ultimately led to a lawsuit and eventually the ruling that opened the door for the state-level laws.

Meanwhile, on Tuesday, Pai made an appearance on CNBC where he defended the agency’s repeal and mocked the concerns from advocates that were brought up ahead of time.

He also seemed to dismiss the large number of fake and fraudulent comments that were left on the FCC’s website ahead of the repeal.

“We made the right decision,” Pai said, later adding: “When we made that decision there were a lot of hysterical predictions… Judging from all the commentary on Twitter, no one is being held back from expressing their views.”

We made the right decision on net-neutrality in 2017, FCC Chairman Ajit Pai says. “Judging from all the commentary on Twitter, no one is being held back from expressing their views.” https://t.co/p6jN6nbE6Y pic.twitter.com/SEpHVmLMLn

“If you look at our decision, we didn’t rely on all of the extraneous commentary, the form commentary that came… We relied on substantial evidence that was in our record.”

Reports have shown that comments on the FCC’s website ahead of its vote to repeal the rules included the names of dead people and current lawmakers and that nearly all of the non-fraudulent comments were against the FCC’s proposal to repeal net neutrality.