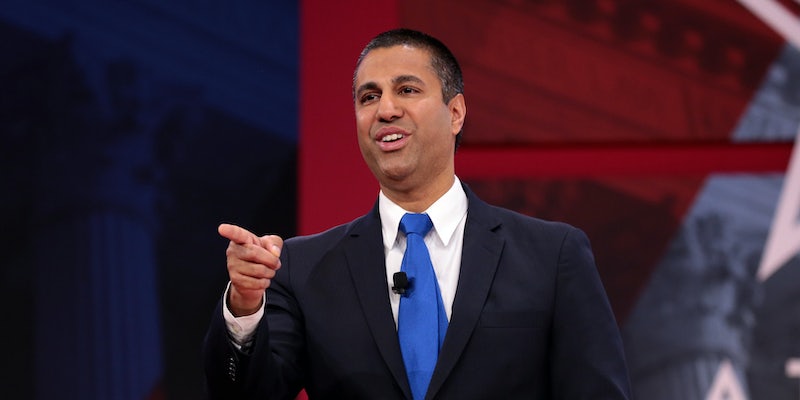 From net neutrality, Trump's social media order, and the coronavirus response, Pai has been met with ire.

Federal Communications Commission (FCC) Chairman Ajit Pai announced that he will step down when President-elect Joe Biden is inaugurated, ending a tenure as the head of the agency that was marked with intense backlash from internet activists and tech advocates.

Pai’s push to repeal net neutrality will undoubtedly be remembered as his most consequential moment as chairman. The move mobilized activists, and the 2017 repeal hung over the agency for the next three years during court battles, pushes from Congress to overturn it, and fighting at every level of government.

While the exact makeup of the FCC remains to be seen, Biden will be able to choose a new head of the agency that will look to reverse much of Pai’s deregulatory agenda.

Pai no doubt has backers—after his announcement on Monday, people came out to congratulate him on his tenure—but he also has attracted explosive pushback and criticism.

Here’s a look at some of the more controversial moments in Pai’s tenure as FCC chair.

Pai’s shepherding of the repeal of net neutrality rules will always be linked to him. The decision had Pai marked as “maybe … the most hated man on the internet” by Wired, and the chairman drew scorn from a number of people in the repeal’s aftermath, including Mark Hamill, Nick Offerman, and even Burger King.

Net neutrality was in the crosshairs immediately for Pai, who promised to take a “weed whacker” to regulations once Trump took office and said net neutrality’s “days are numbered” ahead of being chosen to head the agency.

He followed through on that promise in December 2017, when the FCC voted down party lines to repeal the rules. But that decision would have ramifications for the rest of his chairmanship, and the backlash to the vote was swift and unending.

The repeal was immediately met with criticism, but soon legal challenges and efforts by Congress to overturn the FCC’s vote followed.

The legal challenge stretched into October 2019, when the United States Court of Appeals District of Columbia Circuit mostly upheld the repeal, but vacated a portion of it that blocked states from enacting their own net neutrality laws in the absence of federal ones.

As the legal battle unfolded, Congress tried to pass a Congressional Review Act (CRA) effort that would have reversed the FCC’s repeal. While the CRA passed in the Senate in May 2018, it didn’t get the necessary votes in the House of Representatives, which was controlled by Republicans at the time.

But in April last year, the House—now led by Democrats—passed the Save the Internet Act, a bill that would have essentially made the 2015 net neutrality rules a law. In a reverse of the CRA’s fate, the Republican-controlled Senate has blocked several efforts by lawmakers to force a vote on the bill.

Finally, in a somewhat of a bookend for Pai, the FCC doubled down on the net neutrality repeal last month.

While the future of net neutrality could go in several different directions, there is no question Pai and the repeal will always be inextricably linked.

Pai was also criticized for how the FCC reacted to the coronavirus pandemic. The chairman pushed the “Keep Americans Connected Pledge” early on in the pandemic.

The pledge was voluntary and asked internet service providers (ISPs) and mobile carriers not to shut off service for a certain period of time. It started in mid-March and ultimately extended through June.

While Pai touted the pledge, there were still thousands of complaints filed by Americans to the FCC detailing how their service was actually shut off during the pandemic.

Experts argued that the repeal of net neutrality hindered the FCC’s response to the pandemic. As part of the repeal, the FCC switched ISPs from being classified under Title II of the Communications Act to Title I. The switch abdicated the FCC’s authority over broadband.

Under Title II, experts argued, the FCC would not have needed to ask for ISPs to adhere to the “Keep Americans Connected Pledge” and took away the FCC’s ability to enforce the pledge.

Trump’s ongoing attacks on social media reached a breaking point over the summer after Twitter fact-checked tweets about mail-in voting. Shortly after getting a fact-check from the social media site, Trump signed a controversial social media executive order that targeted Section 230 of the Communications Decency Act.

Section 230 is an important internet law that shields websites from being held liable for what users post on them. Advocates have warned that changes to the law could have wide-reaching consequences online.

Trump’s order asked the FCC to “clarify” provisions of Section 230, and almost immediately there was a debate as to whether the agency had the authority to do that. In fact, Republican FCC Commissioner Michael O’Reilly had his re-nomination withdrawn by Trump shortly after he raised such concerns.

Meanwhile, the FCC collected public comments on the order—which generated responses from people both for Trump’s order and those who were vehemently against it.

Pai tiptoed around the order for weeks, but eventually said in mid-October that the FCC would move forward with it, assuring people that the FCC’s general counsel “has informed me that the FCC has the legal authority to interpret Section 230.”

The decision was quickly condemned, including from members of the House Energy and Commerce Committee, which oversees the FCC.

The consolidation of major companies under Pai’s chairmanship also has drawn condemnation. In October 2019, the FCC approved a merger between T-Mobile and Sprint.

The approval was met with criticism from Democratic commissioner Jessica Rosenworcel, who wrote an op-ed in the Atlantic where she said the merger would “hurt consumers, harm competition, and eliminate thousands of jobs.”

Groups like Free Press, which is active in the efforts to restore net neutrality, also pushed against the merger.

The digital divide, or the gap between Americans who have access to high speed internet and those who don’t, has long been an issue.

However, the gap took on new importance during the coronavirus pandemic. With millions of people working from home—and being schooled from home—it became clear just how many people across the country lacked adequate internet access.

Closing the digital divide is always a talking point for the FCC, regardless of the party who controls it. However, Rosenworcel took aim at the FCC’s annual broadband progress report in an April op-ed for CNN. The FCC’s report asserted that only 18 million people in the United States didn’t have access to broadband.

Rosenworcel argued that the numbers in the report were created using a faulty process. For example, she noted that if a broadband provider told the agency that it serves just one customer in a census block, the agency assumes that everyone in that block also has access.

The FCC did relax some of the requirements to qualify for its subsidized broadband programs during the pandemic, but experts and advocates said the agency could have been doing more.

But not all of Pai’s tenure was met with criticism. The FCC pushed anti-robocall rules, which pretty much everyone could get behind.