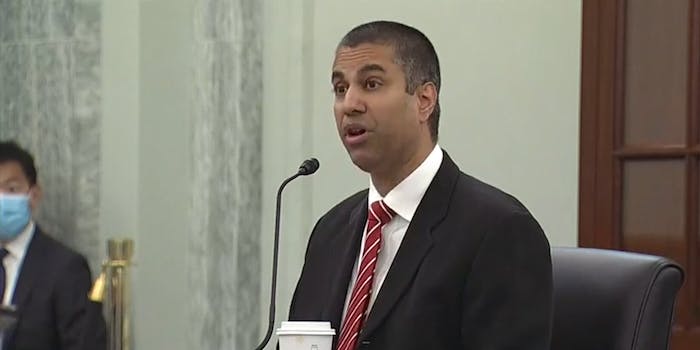 Other members of the FCC have weighed in.

Pai was asked about the order, which targets Section 230 of the Communications Decency Act, during an oversight hearing by the Senate Commerce Committee on Wednesday morning.

Section 230 essentially shields websites from being liable for what is posted on them by third parties. It has become a target for lawmakers on both sides of the aisle, but has been hailed as “one of the most valuable tools for protecting freedom of expression and innovation on the internet.”

Sen. Richard Blumenthal (D-Conn.) asked Pai about the executive order, as it directs the FCC to examine the scope of the section after receiving an order from the executive branch.

“Would you agree with me that the FCC has no authority to do the kind of rule making that the president has ordered in his most recent executive order with respect to Section 230?” Blumenthal asked Pai.

Since the executive order was signed, questions have been raised about what—if anything—the FCC could do about the section. The order is also facing a legal challenge, alleging it is unconstitutional.

Pai responded by saying he did not want to comment until the FCC received an order from the National Telecommunications and Information Administration (NTIA) to begin filing a petition for rulemaking.

The NTIA, which advises the president on telecommunications policy, was directed in the order to file a petition to the FCC to “expeditiously propose regulations” regarding Section 230.

“I would never opine about a petition for rule making that we have not yet received,” Pai said.

Blumenthal then dug in on Pai, claiming that the order questioned the “integrity and authority” of the FCC.

“This executive order is plainly and blatantly, simply an assault on the credibility and the legitimacy of the First Amendment, and of your agency. It’s directing you to do something that you simply do not have the authority to do,” the Connecticut senator said. “If you care about your agency, and you care about its integrity and its authority, you will stand up for it and avoid the president’s effort to engage you in retaliating against his political rivals, against tech companies who happen to be on the other side of issues from him.

“I would like your commitment that you will, in effect, dispel the overhanging threat to them and to constitutional rights that this executive order reflects.”

“Well Senator, if you’re asking for a substantive answer, I can’t provide that,” Pai responded. “Of course I’m not going to prejudge any petition for rulemaking. But what I will say is what I’ve said on every issue. I will always follow the law and follow the facts. Nothing more. Nothing less.”

While Pai has been more or less noncommittal on the executive order, other FCC commissioners have been much more opinionated.

Commissioner Jessica Rosenworcel, a Democrat, said around the time it was signed that the order “did not work” and that making the FCC Trump’s “speech police” was “not the answer.”

Commissioner Geoffrey Starks, a Democrat, on Wednesday said he was “highly skeptical” the FCC had authority to make changes to Section 230.

Meanwhile, Republican Commissioner Brendan Carr has signaled support for it, while Commissioner Mike O’Reilly, a Republican, said he had questions about the FCC’s authority to carry out what the executive order has asked of the agency.

When asked later by Sen. John Thune (R-S.D.) whether Congress was the appropriate venue for changes to Section 230, Pai also sidestepped the question while other commissioners said they did.

Carr added that all “stakeholders” should be involved in the discussion.