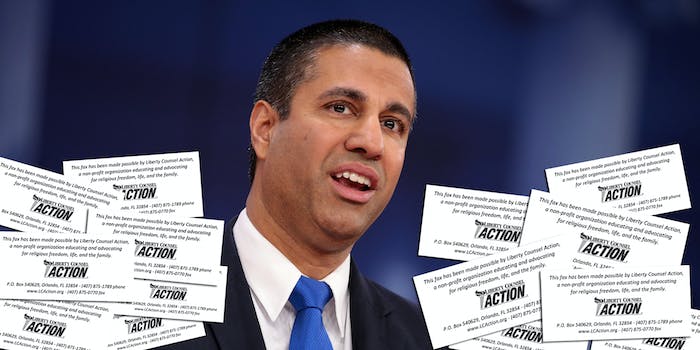 Why is an anti-LGBTQ group spamming the FCC over Section 230?

Around 10 percent of the public comments filed early on came from the same place.

Earlier this month, the Federal Communications Commission (FCC) opened up public comments on President Donald Trump’s controversial social media executive order. And already, a good portion of those comments are coming from a surprising source.

The National Telecommunications and Information Administration (NTIA), a part of the executive branch, filed a petition for rulemaking with the FCC late last month. Trump’s executive order asks the FCC to “clarify the provisions” of Section 230 of the Communications Decency Act.

Section 230 is a legal liability shield that makes it so websites are not held liable for what is posted on them by third-parties. It’s been called “one of the most valuable tools for protecting freedom of expression and innovation on the internet.”

However, despite its out sized importance to the creation of the modern internet, Section 230 has been put under the cross-hairs from both sides of the aisle. Besides Trump’s executive order, presumptive Democratic presidential nominee Joe Biden has raised the possibility of stripping the protections, and Congress has a slew of bills that target the law.

Almost immediately after Trump issued the order, it was met with a legal challenge, asserting that it is unconstitutional. Despite this, FCC Chairman Ajit Pai announced earlier this month that public comments would be opened for 45 days and that he hoped for a “vigorous debate” to occur before the FCC voted on it.

A significant portion of that “debate” seems to be coming from one place—around 10 percent of the comments up until late last week all had the same wording as a petition from Liberty Counsel Action.

On Aug. 13, 18 of the 183 comments filed on the FCC’s public comment page were either directly from Liberty Counsel Action’s petition or extremely similar. Over the weekend, the total number jumped to more than 500 comments, many of them in support of Trump’s executive order. Only one of those new comments appeared to be the same as the Liberty Counsel Action petition.

Liberty Counsel is a Florida-based 501(c)(3) religious liberty non-profit that has been labeled as anti-LGBTQ by anti-discrimination groups. The firm defended Kentucky clerk Kim Davis after she refused to marry same-sex couples in 2015.

The petition is listed among numerous other ones on Liberty Counsel Action’s website, purportedly as part of a push to “stop the censorship of truth.”

“These Big Tech companies are claiming they are ‘private companies’ and can censor the viewpoints of other citizens, while they also claim to be a ‘public utility’ and immune to lawsuits for the messages they do distribute. They cannot be both if our First Amendment freedoms are to be protected,” the petition reads in part.

That language is littered throughout the FCC’s public comments. While the comments are public, the Daily Dot redacted names on them.

Automated, similar-sounding, comments being filed with the FCC is nothing new.

In the run up to the FCC’s controversial repeal of net neutrality rules, in addition to millions of fake and fraudulent comments being made, a BuzzFeed News investigation linked millions of fake comments to a broadband industry group.

The proceeding also had automated comments from people who were both pro-net neutrality and from people who wanted to see the rules repealed, according to Wired. Typically this was a system where people could press a button that would file a pre-written message out, similar to the Liberty Counsel Action petition.

What is a bit peculiar is Liberty Counsel weighing in on tech policy.

Other petitions listed on its advocacy arm’s website include calls for people to take action against the Equality Act, Planned Parenthood, contact tracing, and to fire Dr. Anthony Fauci.

It also remains to be seen how much the FCC will actually take into account a bunch of automated messages as the process moves forward.

Despite nearly all of the non-fraudulent net neutrality comments being in favor of keeping the rules—according to a study—the FCC went ahead and repealed the 2015 Open Internet Order, which established net neutrality rules.

Also, the Section 230 order public comments aren’t immune to fake ones being posted: Posts uploaded on Friday were made in the names of Ajit Pai and the cartoon character Fred Flinstone.

The FCC did not respond to a request for comment by the Daily Dot, including how it is vetting public comments in light of what happened with the net neutrality ones and about how the FCC will weigh large batches of public comments against ones sent individually.

Besides the Liberty Counsel comments, the rest of the comments initially appeared split on Trump’s social media executive order. Many people have argued in favor of Section 230, while others have lamented a perceived bias against conservatives by social media companies.

However, on Friday last week, a significant number of comments were added in support of Trump’s order. The rush seems to have come shortly after the Gateway Pundit wrote a post about the comments.

Update 10am CT, Aug. 20: Liberty Counsel Action responded to the Daily Dot before publication, but the emailed responses were inadvertently marked as spam by an email provider.

Liberty Counsel Action Director of Public Policy Amber S. Haskew said the organization was “concerned about censorship on social media platforms” and that the people signing the petition are “long time” constituents and are vetted by the organization.