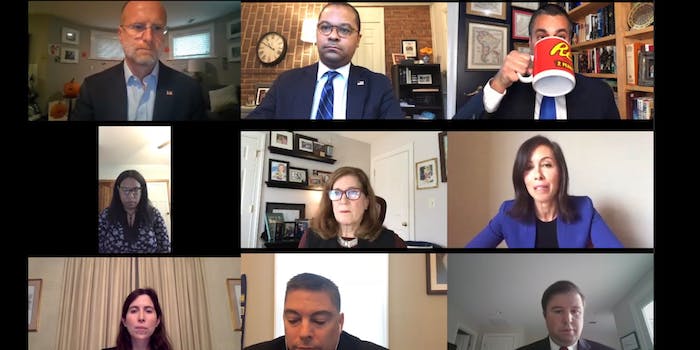 FCC doubles down on net neutrality repeal in partisan vote

The vote was 3-2 to brush off a court order.

The Federal Communications Commission (FCC) voted on Tuesday to approve an order that says it resolved issues a federal court raised with its controversial net neutrality repeal.

Last year, the United States Court of Appeals District of Columbia Circuit handed down a ruling for Mozilla v. FCC that mostly upheld the FCC’s net neutrality repeal, but asked the agency to look into the effect it would have on public safety, access to utility poles, and how it would impact the Lifeline program, which subsidizes low-income Americans’ broadband access.

The agency opened public comments for experts and groups to weigh in on the examination of the court’s questions. While some stakeholders asked the FCC to extend the deadline for comments because they were dealing with the coronavirus pandemic, the agency only agreed to extend it once.

The FCC’s order on Tuesday essentially concluded that the 2017 repeal does not need to change after reviewing the three areas the court asked them to look into. FCC Chairman Ajit Pai strongly defended the repeal and Tuesday’s order addressing the court’s questions ahead of Tuesday’s vote.

“The Order on Remand would address the three issues the Mozilla court remanded and conclude that in each case there is no basis to alter the Commission’s conclusions in the Restoring Internet Freedom Order,” a fact sheet for the order reads.

While the Republican members of the commission spoke out in favor of the Tuesday’s order, and the repeal of net neutrality rules in general, Democrats had a decidedly different tone.

“Today we had an opportunity for a do-over,” Commissioner Jessica Rosenworcel said. “A court sent a mess this agency made with net neutrality back to the FCC. It told us our decision was wrong for public safety, wrong for broadband infrastructure, and wrong for low-income households. It told us try again. But this order on remand makes apparent this agency is not interested in getting it right. Instead it doubles down, rather than recognizing the realities of the world around us.”

“The D.C. Circuit remanded the RIF order because it found insufficient the majority’s claim that deregulation will benefit, or at least not harm, public safety, pole attachments access, and the Lifeline program,” Starks said. “The remand order claims to address these deficiencies but in reality it still falls well short.”

Others also criticized the FCC’s vote, including net neutrality advocates and the members of the House Energy and Commerce Committee, which oversees the FCC in the House of Representatives.

“Today, the Trump FCC doubles down on the complete abdication of its responsibility to protect public safety, promote competition, and make broadband available to all Americans,” Gigi Sohn, a distinguished fellow at the Georgetown Law Institute for Technology Law & Policy and former FCC counselor, said in a statement. “In its fervent yearning to free the broadband industry of all oversight, the FCC once again relies on an argument that has been proven time and again to be false—that reclassifying broadband as an unregulated information service will result in greater investment in broadband networks, more competition, and lower prices.”

“Chairman Pai is at it again, pushing his anti-consumer agenda—this time on the eve of an historic election. Americans deserve strong Net Neutrality protections, but this FCC is rushing ahead of November 3rd to further cement its efforts to deprive Americans of these critical protections,” the two lawmakers said in a statement.

Evan Greer, the deputy director of Fight for the Future, said the vote highlighted that the FCC’s leadership “will go down in history as laughingstocks who attempted to kill internet freedom.”

“We’re in the middle of a deadly pandemic where people are more vulnerable to Big Telecom’s abuses than ever before, and the FCC is voting against internet freedom once again,” Greer said in a statement. “They’re ignoring a mountain of evidence and the voices of the overwhelming majority of people from across the political spectrum. And they’re spitting in the face of our nation’s medical professionals and first responders by specifically ignoring a court order to address the serious public safety issues surrounding their repeal of net neutrality. ”