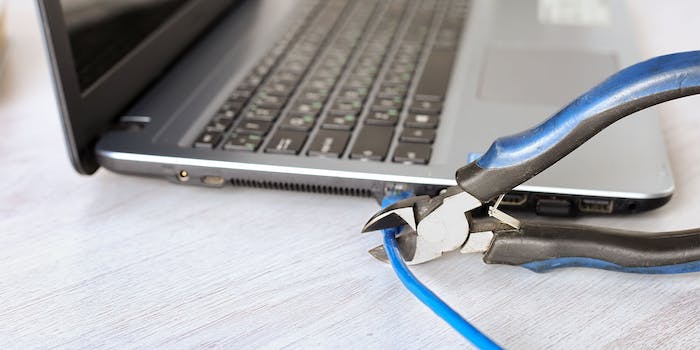 Hundreds of companies signed onto a pledge not to cut off service. But customer complaints show it's happened.

A customer in New York said they were forced to use their last paycheck to pay for their internet to be restored in late March so they could apply online for unemployment.

Another customer in Texas in early April said they knew they were late on their bill payment for internet service, but getting disconnected made it impossible for her daughter to do schoolwork.

That same month, a Wisconsin customer said because their company cut back their hours, they weren’t able to pay their phone bill—but they can only get told when to work over the phone.

These are just a few of the experiences people across the country told the Federal Communications Commission (FCC) about their broadband and phone providers shutting off service after companies signed a pledge not to do so during the coronavirus pandemic.

FCC Chairman Ajit Pai told lawmakers last month that the agency has received more than 2,000 coronavirus complaints from Americans related to the pandemic, and that of those, around 500 were filed regarding the “Keep Americans Connected Pledge.”

The non-binding pledge was announced by the FCC in March and asks internet service providers (ISPs) and mobile carriers to agree not to shut off service for a certain period of time. The pledge started in mid-March and was originally for 60 days, but it was later extended through this month.

The Daily Dot filed a Freedom of Information Act (FOIA) request for copies of the complaints related to the pledge and general coronavirus-complaints. The 498 complaints received highlight the dire situations Americans found themselves in when their access to the internet was shut off at a time where it has become absolutely critical. The complaints obtained were made by customers from March 12 to May 1.

The complaints are oftentimes exceedingly emotional: detailing how customers said they had to ration the last of their money after being laid off to pay for phone service instead of groceries, or how one customer’s service was shut off, denying them access to telehealth options.

One complaint came from the family of a first responder in Wisconsin.

Around 800 companies have agreed to the Keep Americans Connected pledge—and most of them appeared in the complaints obtained by the Daily Dot.

In its response to the Daily Dot’s FOIA request, the FCC pointed out that a complaint filed with the agency does not necessarily prove that any wrongdoing occurred by either the company or a customer. Several providers told NBC News in April that customers had to proactively reach out to them with disconnection issues.

Pai also told the House Energy and Commerce Committee’s communications and technology subcommittee last month that “most” of the complaints regarding the pledge had been resolved.

The FCC told the Daily Dot the agency has been monitoring carriers’ responses to the complaints and that “in most cases, this process has resulted in consumers continuing to have broadband service during this time.”

“It is without question that the Keep Americans Connected Pledge has helped many American consumers and small businesses stay connected during the pandemic,” an FCC spokesperson said.

The complaints, though, are harrowing and highlight just how reliant people are on communications services during the pandemic. The companies, by signing the pledge, said they would not shut off services—but Americans detailed numerous instances where they apparently did.

Forty-three states had at least one resident file a complaint with the FCC about the pledge not being adhered to or, in general, being disconnected during the pandemic. Some of the states hit hardest by coronavirus, like New York, tallied the most complaints.

The most complaints came from New York, Texas, California, Florida, Pennsylvania, New Jersey, and Michigan. The companies in the complaints range from giant providers like AT&T, Comcast, Charter, and Verizon to smaller local ones like Rise Broadband and Windstream Communications.

Many complaints to the FCC highlighted the financial hardships caused by the pandemic—with customers describing a need to decide between paying for internet services or food.

“This morning I awoke to the disconnection of all service provided by Altice/Optimum, for nonpayment,” one complaint from March 24 reads. “I’ve been isolated for weeks with my family due to the impact coronavirus has had in our household, no phone, no internet, no TV. I am self employed and have zero income during this pandemic. I am only able to send this email by using the little data that I have available on my cell.”

“I am a mother of four boys whom who all are in school and need the internet to do their online school work, so I paid my bill of $221.00 to turn my services on, in which was the last money I had and now do not have money to buy groceries for the week to provide to my family,” another complaint from March 24 reads, adding: “Shame on [Altice] One for cutting my services at a time like this. Please let me know if there is anything I could do? I would just want my $221 back so I can provide groceries to my family.”

Others, like a customer from Canby, Oregon, told the FCC in a complaint that their Boost Mobile phone service was the only thing standing between being laid off from a job they had already seen hours cut from.

“My Boost Mobile phone service has been cut off because of not being able to pay,” the customer wrote on April 11. “I cannot pay my phone bill right now cause my hours have been severely cut due to the coronavirus outbreak. I need this phone, it is my lifeline, without it, my work will not be able to get a hold of me … Without this phone, there is a very good chance that I will get fired.”

One complaint, filed in late April, appears to have been called into the FCC. The customer told an operator that she has been unable to pay for her service with Optimum because of the pandemic, and needed to have access to telehealth options for a series of medical issues including a brain tumor, asthma, and multiple sclerosis.

The customer added that she intended to use part of her stimulus check to pay for service.

A complaint from a customer in Royse City, Texas put it bluntly when describing Sudden Link shutting off their service:

“I was just disconnected, and by reading the comments of their Facebook page, I am just one of many.”

In a statement to the Daily Dot, FCC Commissioner Jessica Rosenworcel, a Democrat, said the agency needed to investigate complaints, especially during the pandemic.

“Promises made not to cut off communications need to be kept,” Rosenworcel said in a statement. “The FCC has to investigate each and every one of the hundreds of complaints from consumers relating to the shut off of their services. And it needs to do it fast. Because no one should have to worry about losing service during this crisis.”

“Millions of Americans don’t have broadband at home because they simply can’t afford it. As many of these complaints show, low-income people are making tough financial decisions during this pandemic because they know being offline means being left out of remote work, education, and health care,” Starks said in a statement. “I commend the companies that have made and honored the Keep America Connected pledge, but we need a long-term commitment to making broadband affordable: more competition, more resources for the Lifeline program, and a requirement that companies that receive federal funding for broadband deployment offer affordable options.”

While Pai has said that most of the complaints it received about loss of connections have been resolved, experts said it is hard to know with certainty that they actually are.

Gigi Sohn, a distinguished fellow at the Georgetown Law Institute for Technology Law & Policy and former FCC counselor, said that complaints made to the FCC are sent to internet and mobile carriers to be resolved. From there, the carriers come back to the FCC and tell them the complaint has been taken care of. The FCC’s website notes that complaints require a response within 30 days.

However, Sohn said the FCC was “taking them at their word.”

“The problem is the chairman claims to have resolved all of them,” Sohn said. “I don’t know how you actually validate that. Is he going to put out a report? … I’m not saying carriers are a bunch of liars, but I think the agency has an independent duty, particularly now, to make sure people aren’t disconnected.”

But Sohn added that she felt 500 complaints were a “microcosm of the number of people cut off” because not everyone knows about the Keep Americans Connected pledge or even that they can file complaints with the FCC.

“You kind of have to be, in a lot of ways, a savvy consumer to know how to enforce your rights,” Sohn said. “I don’t get the sense that the FCC is making it easier, or alerting the public, about what they can do if these carriers are not keeping their promises.”

Last month a group of 27 attorneys general from across the country wrote a letter to the FCC asking for them to expand the pledge until August and consider adding provisions like not allowing providers to begin debt collection for people who can’t pay bills for at least six months.

“Many Americans are now facing unanticipated economic circumstances as a result of this crisis, due to no fault of their own, and any disruption in their internet or telecommunications service has the potential to have a devastating impact on their safety, education, and work,” they wrote, adding: “These commitments made pursuant to this FCC pledge are commendable. However, based on our experience on the ground protecting our residents and what we have heard from them over the past few weeks, we believe these 3 commitments alone are not enough.”

You can read all of the complaints obtained by the Daily Dot here.