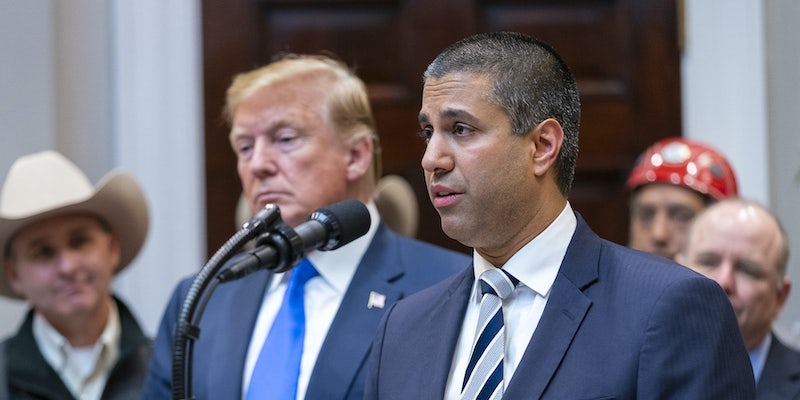 The agency recently wrapped up collecting public comments about the order.

In May, Trump signed a social media executive order that directed the executive branch to ask the FCC to “clarify” Section 230 of the Communications Decency Act.

Section 230 shields websites from being held liable for content posted on them by users. Despite being hailed as “one of the most valuable tools for protecting freedom of expression and innovation on the internet.”

Despite this, the law has been a target for lawmakers on both sides of the aisle.

The National Telecommunications and Information Administration (NTIA) filed a petition for rulemaking to the FCC in late May, and the agency collected public comments about the order.

The comments that were filed both supported Trump’s order and were vehemently against it. Tech advocates and companies have warned that changing Section 230 could have wide-ranging consequences online, with Reddit telling the FCC that any changes could “change the very trajectory of the internet.”

Questions have also been raised as to whether the FCC has the authority to “clarify” Section 230, as Trump’s order asks the agency to do.

Pai addressed that in a statement on Thursday, saying the FCC’s general counsel “has informed me that the FCC has the legal authority to interpret Section 230.”

“Consistent with this advice,” Pai said, “I intend to move forward with a rulemaking to clarify its meaning.”

“We’re in the midst of an election. The President’s Executive Order on #Section230 was politically motivated and legally unsound. The FCC shouldn’t do the President’s bidding here,” Commissioner Geoffrey Starks tweeted, linking to Pai’s statement.

Similarly, Commissioner Jessica Rosenworcel tweeted that the agency had “no business being the president’s speech police.”

Meanwhile, Deputy Director of Fight for the Future Evan Greer called Pai’s decision “laughable if it weren’t so dangerous.”

Fight for the Future helped direct more than 14,000 comments to the FCC opposing the agency moving forward with Trump’s order.

“The reality is that lawmakers from across the political spectrum are deeply misinformed about how Section 230 actually works. It feels like every week there’s a new misguided proposal in Congress. But repealing Section 230 won’t do anything to hold Big Tech companies accountable or address the harms done by their data harvesting business models. And it won’t do anything to address concerns around biased moderation or the silencing of marginalized voices,” Greer said in a statement. “Repealing Section 230 would just make all the bad parts of the Internet worse while burning the good parts to the ground.”

However, the story has raised eyebrows, specifically about the origins of the laptop and “suspicious behavior” surrounding the emails at the heart of it.