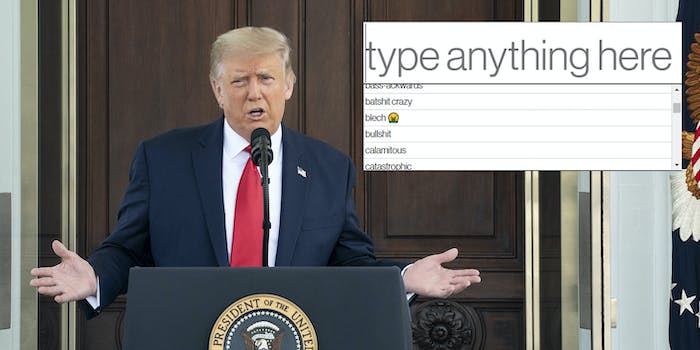 There are now a lot of colorful adjectives you can use to describe how you feel about Trump's order.

A digital rights group has launched a new website that makes it easy for internet users to express their displeasure with President Donald Trump’s controversial social media executive order.

The order targets Section 230 of the Communications Decency Act, which shields websites from being liable for what is posted on them by third parties. The section has been hailed as a bedrock of the modern internet.

Despite its importance, Section 230 has come under fire from both sides of the aisle. Most recently, a bill introduced by Sens. Lindsey Graham (R-S.C.), Marsha Blackburn (R-Tenn.), and Roger Wicker (R-Miss.) takes aim at the section, but there are plenty of other bills in Congress that would do the same.

Trump’s order was signed in May and it called for the National Telecommunications and Information Administration (NTIA), a part of the executive branch, to file a petition for rulemaking with the Federal Communications Commission (FCC) to amend Section 230.

Trump’s order is already facing several legal challenges, claiming that it is unconstitutional.

In the midst of this, the FCC announced that it would collect public comments about the petition for rulemaking, with Chairman Ajit Pai saying he hoped for a “vigorous debate.”

The comments have been rife with identical petitions from Liberty Counsel, a religious liberty organization that has been labeled anti-LGBTQ by anti-discrimination groups. Meanwhile, TechDirt reports that AT&T provided letters to organizations to sign saying they support Trump’s order.

Other comments centered around a perceived bias against conservatives by social media giants, and appear to have come after a right-wing blog urged its readers to file comments.

And, much like the FCC’s net neutrality repeal public comments, some have been completely fake: with people using Pai’s name and even Fred Flinstone to file comments.

Not all of the comments have been for Trump’s order: Reddit submitted a comment where it said if Section 230 changes it “would change the very trajectory of the internet.”

But while those pushes have been in support of Trump’s order, digital rights group Fight for the Future on Thursday has created a way for people to file comments urging the FCC to reject the petition for rulemaking.

And it includes a number of colorful ways for people to express their displeasure for the order.

The group launched saveonlinefreespeech.org on Thursday, and it allows for people to type in (or choose from a dropdown) a number of adjectives and emojis to describe how they feel about Trump’s Section 230 order.

Some of the choices include “ass-backward,” “atrocious,” “calamitous,” “dangerous,” “flawed,” “legally unsound,” and “definitely not going to fix social media censorship,” among dozens of others.

After filling out the adjective, the page adds the choice to an automated message, that can be edited, saying that many of the comments already submitted “clearly have no understanding about what this law actually does” and urges the FCC to reject Trump’s order.

The website also includes information about Section 230 and why changes to it “could ruin the internet.”

“President Trump’s executive order to blow up Section 230 and censor the internet is deeply silly and blatantly violates the First Amendment,” Evan Greer, deputy director of Fight for the Future, said in a statement. “But it’s just one among a series of similarly nonsensical proposals that would kill off the law that makes the best parts of the internet possible. If one of these attacks succeed it could shut down enormous swaths of the internet and lead to widespread censorship of our videos, photos, discussions, and opinions.”

Fight for the Future will collect comments until the reply deadline for the FCC on Sept. 17. The “reply” phase gives people the opportunity to respond to public comments already filed.

Critics have warned that Trump’s order, which is fixated on a perceived bias against conservatives and was signed shortly after he was fact-checked by Twitter, could actually have the opposite effect of what he wants if it goes through.

Without Section 230 protections, websites could have to become more aggressive in moderating content on their platforms.

As the Electronic Frontier Foundation explains: “Rather than face potential liability for their users’ actions, most would likely not host any user content at all or would need to protect themselves by being actively engaged in censoring what we say, what we see, and what we do online.”