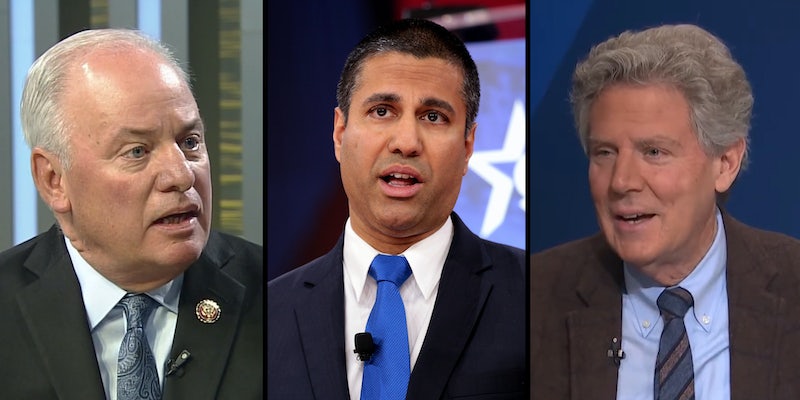 Last week, Pai announced that the FCC would move forward with a rulemaking process after Trump’s order asked the agency to “clarify” Section 230 of the Communications Decency Act.

The law shields websites from being held liable for content posted on them by users and has been called “one of the most valuable tools for protecting freedom of expression and innovation on the internet.”

Ahead of Pai’s announcement, the FCC collected public comments about whether to move forward with Trump’s order. The agency was flooded with comments from both those who supported Trump’s order and those who opposed it.

The Energy and Commerce Committee holds oversight hearings for the FCC, and their outcry joins a chorus of others from last week including Democrats at the FCC and tech advocates. Many experts have warned that changes to Section 230 could have far-reaching consequences online.

“The timing and hurried nature of this decision makes clear it’s being done to influence social media companies’ behavior leading up to an election, and it is shocking to watch this supposedly independent regulatory agency jump at the opportunity to become a political appendage of President Trump’s campaign,” Pallone and Doyle said in a statement on Monday.

The two lawmakers added that they hoped for a reform of Section 230 that “creates a structure for healthier online ecosystems” but the FCC’s decision to move forward just weeks before the 2020 election shows that is a “reckless and politically-motivated stunt.”

While Trump’s order moving through the FCC has taken up much of the attention surrounding Section 230, it is far from the thing in Washington, D.C. that is targeting the law.

Both Trump and former Vice President Joe Biden have called for Section 230 to be repealed or revoked, and there are a growing number of bills in Congress that seek to change or reform the law.