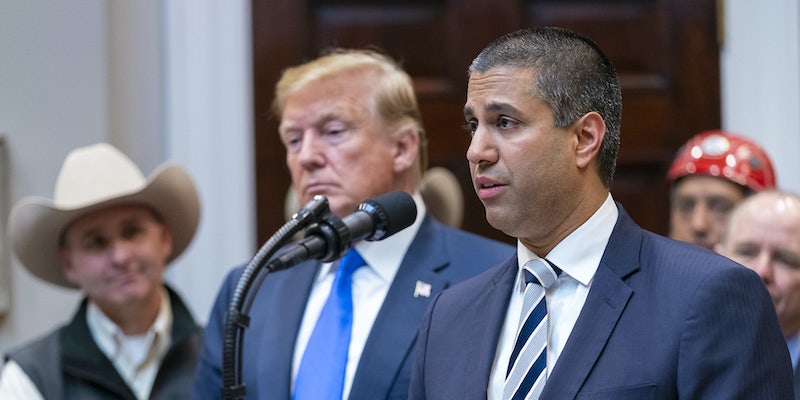 The public comments system for the net neutrality repeal was rife with fraudulent comments.

The FCC chairman has been mum on the order since Trump announced it in May, dodging questions about his stance—which many have called unconstitutional or inappropriate for the FCC to tackle.

The National Telecommunications and Information Administration (NTIA), a part of the executive branch, filed a petition for rulemaking with the FCC late last month.

On Monday, Pai said the public will have a chance to weigh in for the next 45 days.

“We should welcome vigorous debate—not foreclose it,” Pai said in a statement. “The American people deserve to have a say, and we will give them that chance.”

Trump’s order asks the FCC to “clarify the provisions” of Section 230 of the Communications Decency Act, which shields websites from being liable for what is posted on them by third-parties.

The news of public comments opening was not met with the same enthusiasm by Democratic members of the FCC, both of whom have been opposed to the order and the agency’s role in it.

Jessica Rosenworcel called on people to use the comment system to reject the order.

“Today the FCC announced it will take comment on the White House petition asking the agency to moderate content under Section 230,” Rosenworcel tweeted. “Social media can be frustrating. But the FCC shouldn’t be the president’s speech police. So speak up. Tell the FCC to reject this loud and clear.”

Similarly, Geoffrey Starks, noted that the FCC did not have the authority to do what the order asks it to do.

“I’m sure this Public Notice will generate a spirited discussion. Perhaps when comments are in we can package up the whole docket and send it over to Congress—where this debate belongs. #Section230,” Starks tweeted.

While Pai said he hoped for the public comments to open a “vigorous debate,” that debate was resoundingly ignored the last time this happened in the fight over net neutrality.

The FCC was even forced to announce an entire new system after the old one was hijacked during the net neutrality debate.

Millions of fake comments were made during the FCC’s collection ahead of its controversial repeal of net neutrality in 2017. A BuzzFeed News investigation linked millions of the fake comments to a broadband industry group.

Names of dead people and members of Congress were fraudulently used to post comments.

But one study found that nearly 100 percent of comments made by real people were in favor of the FCC keeping the existing net neutrality rules.

Given that the agency didn’t listen to those comments and repealed the rules, it doesn’t inspire much hope that it will listen to people calling on it to reject Trump’s order as Rosenworcel asked.

A quick glance at comments already left on the FCC’s website show a majority of people against Trump’s order.