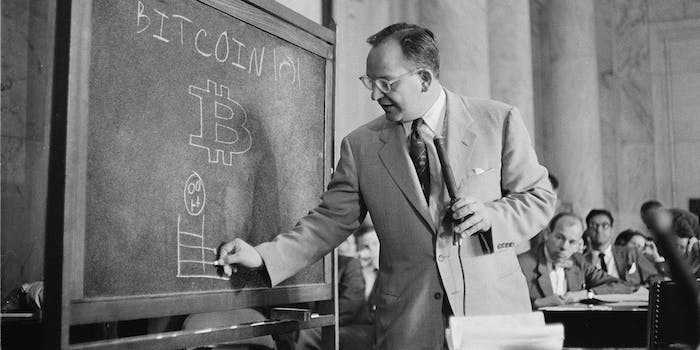 The interest in—and value of—Bitcoin has never been higher. This primer will bring you up to speed on the digital cryptocurrency.

On Oct. 31, 2013, the most viewed topic on Wikipedia outside of Halloween wasn’t about the Boston Red Sox or Eminen’s highly anticipated new album. It was Bitcoin, the digital cryptocurrency that’s been gaining favor around the world. On that day alone, the article was viewed over 14,000 times.

Clearly there’s an intense and growing demand for basic information about Bitcoin—especially considering it hit a record high of $270 this week.

Often billed as the ‟currency of the Internet,” Bitcoin is an electronic system where tokens, in the form of encrypted files, are created and exchanged much in the same way as cash.

The idea for Bitcoin was first proposed in 2008 by an anonymous programmer known as Satoshi Nakamoto. The first bitcoins created a few months later. There’s some speculation the he or she still holds one out of every 10 bitcoins in existence.

How is Bitcoin different than regular money?

The biggest difference between bitcoins and what’s in your wallet is that Bitcoin isn’t technically issued, regulated, or ‟backed” by a government entity.

Since each individual Bitcoin has its own unique encryption code and transactions are handled directly from one user to another, it’s easy for both sides of a given transaction to remain anonymous. This level of anonymity led to Bitcoin’s initial popularity in the seedier corners of the Deep Web, where it’s been used to support an illegal drug trade, gambling, and much more.

But there are countless practical uses as well, which we’ll get to shortly.

If no one is in charge of Bitcoin, how do new bitcoins get minted?

Bitcoins are essentially created out of thin air by a network of Bitcoin ‟miners” around the world.

They’re passed directly from one user to another, with no intermediary financial institutions handle the transaction. However, there’s still a need for some entity outside of the two doing business to process the each interaction. Bitcoin solves this problem by offering people a deal: If users run a program on their system facilitating transactions by solving incredibly complex mathematical equations, they’ll be rewarded with freshly created bitcoins.

These ‟miners” are responsible for all of new bitcoins coming into existence. Since Bitcoin mining is about as close to literally printing money as one can get without running afoul of the U.S. Secret Service, it isn’t surprising the practice quickly turned into an arms race with miners spending very large sums of money on specialty hardware designed for that very purpose.

Unlike typical currencies, where governments have the ability to keep printing money, the system is set to only allow a fixed number of bitcoins to ever be mined—a trait that’s made it a favorite of libertarians and has drawn comparisons of the currency to gold. If everything continues on schedule, bitcoins will continue being mined at a gradually slowing rate until the year 2140, when mining will cease at a grand total of 21 million bitcoins. There are presently about 11.5 million bitcoins in circulation.

Can I get my bitcoins in a physical form?

It is possible to transfer virtual bitcoins into physical currency. A company called Casascius sells collectible, gold-plated coins with the ‟private key” required to spend them online printed onto a hologram housed inside each coin. That key can then be used to convert the physical Bitcoin back into its original, digital format.

Can I use bitcoins to order a pizza?

In what’s widely considered the first Bitcoin transaction of all time, Florida-based computer programmer Laszlo Hanyecz sent 10,000 bitcoins to one of his associates in England, who then used about $25 of it to order a pizza from Papa John’s. The value of that pizza today? Roughly $2 million.

Over the ensuing years, Bitcoin’s pizza ordering infrastructure has improved to the point where a company like PizzaForCoins.com can convert btcoins into delicious pizza at something much closer to the standard rate for an extra large with pepperoni.

Why does Bitcoin have such a bad reputation?

Since Bitcoin allows its users to remain anonymous, the currency has become a useful tool for people who wish to engage in activities that aren’t exactly legal. Recently shuttered online marketplace Silk Road, which was considered the single largest clearing house for Bitcoin-related purchases, was notorious for the sale of everything from large quantities of marijuana to forged government documents.

On the Deep Web, a network of websites that can only be accessed using the anonymizing network Tor, there are similar sites still in operation, some of which offer the services of professional contract killers. While the validity of these sites has been called into question, the combination of Bitcoin and Tor creates a situation where neither the buyer or seller knows the other’s identity, thereby minimizing each’s potential for exposure.

In an essay published earlier this year in the Michigan Law Review, University of Florida law professor Omri Marian speculated that Bitcoin could soon become the next-generation offshore tax haven, with an anonymously held Bitcoin wallet substituting for a bank account in the Cayman Islands. Marian admitted that the value of all the Bitcoins currently in existence (just under $2.5 billion) isn’t yet large enough to facilitate widespread tax evasion. However, he predicted the currency’s tendency toward secrecy and ability circumvent financial institutions could eventually make it lucrative to tax evaders.

Can I declare Bitcoin on my taxes?

Probably, although figuring exactly how to do that is still kind of a grey area.

How does the U.S. government feel about Bitcoin?

The U.S. government, especially law enforcement, doesn’t seem particularly thrilled with the myriad ways in which Bitcoin makes committing crimes, namely drug trafficking, significantly easier. In a memo leaked onto the Internet last year, the FBI claimed that criminals would undoubtedly use Bitcoin and that the agency has trouble keeping track of illegal activity conducted using the currency.

There are also concerns that groups facilitating the transfer of bitcoins aren’t being held to the same standards as financial institutions that handle traditional currencies. Earlier this year, the Department of Homeland Security seized the funds Japanese Bitcoin exchange Mt. Gox was holding with electronic payments company Dwolla on the grounds that Mt. Gox had not registered as a money transmitter.

Even so, the U.S. hasn’t gone as far as putting a prohibition on the use of Bitcoin. Other countries have not been so accommodating. Thailand, for example, has banned the currency outright. On the other side of the Bitcoin divide are countries like Germany, which recently became the first nation to officially recognize Bitcoin as legal form of currency, and China, which is rapidly becoming the global hub for the exchange of bitcoins.

How secure is the Bitcoin network?

The history of Bitcoin is replete with examples of various aspects of the Bitcoin universe being compromised. The first major case came nearly two years after the first Bitcoin was mined, when some enterprising hackers exploited a vulnerability in the system to create 184 billion bitcoins for themselves. Over the ensuing years, the security systems of Bitcoin exchanges like Mt.Gox, MyBitcoin and BitFloor were seriously breached.

While Bitcoin is the most prominent cryptocurrency on the market, it’s not the only one. In the years since Bitcoin’s introduction, a number of similar efforts have burst onto the scene.

Launched in 2011, Litecoin is similar to Bitcoin in that it’s built off of much of Bitcoin’s original source code. Litecoin’s boosters argue that it is superior to Bitcoin because it is designed to transfer between users at a faster speed. The mining process is also significantly easier, because it can be done with standard personal computers rather than the highly specialized systems employed by Bitcoin miners.

Another competitor is Feathercoin, which, in turn, was based on Litecoin’s infrastructure. Feathercoin distinguishes itself by planning to allow for the mining of very large number of coins, 336 million, far more than Bitcoin.

Russia-based WebMoney is actually a decade older than Bitcoin. It was founded all the way back in 1998. Unlike other online currencies, WebMoney can only be used to make purchases within WebMoney’s internal system. One potential advantage of WebMoney is that its value is tied to the U.S. dollar, protecting it from the sort of wild price swings that have given many people, including some of Bitcoin’s natural ideological allies, reason to hesitate before embracing the currency wholeheartedly.

None of these alternatives, however, compare to Bitcoin in terms of adoption or brand recognition.

How do I get bitcoins?

The first step is to get a Bitcoin wallet, which is an account located either on your computer or in the cloud, where bitcoins can be stored. There are a few of different options for exactly how one’s Bitcoin wallet can function.

Once your wallet is set up, you can then start accumulating bitcoins. The easiest way is to buy them on one of the numerous exchanges located around the world. It’s also possible to accumulate bitcoins the same way you accumulate traditional money—by working for it. If you’re a business owner and set up a Bitcoin wallet, you can receive payment in Bitcoins. Additionally, expense report software Expensify allows for payments to employees to be made in Bitcoin.