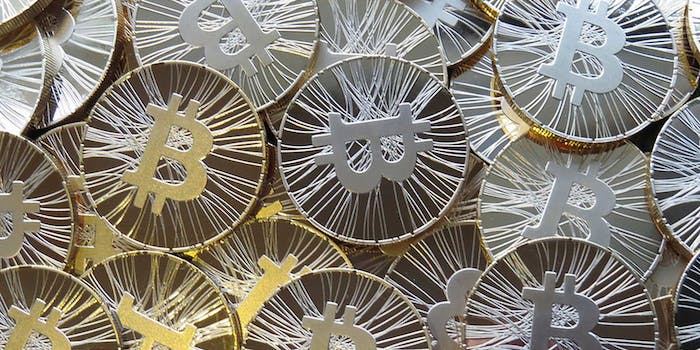 The machine, owned by three Canadian teens, will be ready to use in a Vancouver café Tuesday.

Bitcoin will take another step toward becoming a mainstream currency as the first Bitcoin ATM goes live next week.

Three Vancouver teens will activate the first one of the machines at a coffee shop in their hometown Tuesday, marking another milestone for a digital currency that’s been on the rise all year.

The machine, built by Nevada-based Robocoin, allows users to pay cash for bitcoins and vice versa. To use it, all one has to do is let the machine scan his or her palm, and then deposit as much as $3,000 Canadian. The ATM will automatically convert the currency to Bitcoins on Canada’s VirtEx exchange and move them to the user’s wallet. The palm scan prevents people from depositing more than the $3,000 in a single day, which would violate Canada’s anti-money laundering laws.

The idea of a publicly accessible, automated Bitcoin banking station was one that teen Mitchell Demeter and two of his friends came up with on their own when they founded Bitcoiniacs earlier this year. But after realizing that Robocoin was already in the business of building such machines, they decided to buy five and install them in locations throughout Canada. Robocoin has been making Bitcoin ATMs for a while, but none have gone online yet, especially in the United States, where federal authorities have been cracking down on the questionably legal currency.

Demeter and his partners bought the machines for $18,500 a piece. The first will be located at a Vancouver cafe owned by schoolteacher Judy Fujiki. Like many speculative investors in 2013, Fujiki, 53, went from knowing nothing about Bitcoin to becoming an avid supporter of the anonymous, digital currency, according to Wired. Fujiki’s cafe is already among the handful of brick and mortar businesses that have begun accepting the unregulated currency.

Wired reports that Canadian regulators have been quiet on the issue of Bitcoin ATMs thus far. Demeter told the magazine that he hasn’t received specific guidance about his business from the country’s Financial Transactions and Reports Analysis Centre. If the first machine is successful, Bitcoiniacs hopes to place its other four kiosks in locations around the country.

The realization of a permanent ATM is not surprising to Bitcoin watchers who’ve monitored speculation all year. Shortly after Bitcoin’s value began to significantly rise in January, a pair of entrepreneurs in New Hampshire began imagining a future where Bitcoin ATMs were as common as their cash counterparts. There has also been talk of of Bitcoin ATMs becoming a fixture in Cyprus, where the collapse of the banking system has some eyeing the European island nation as a possible “laboratory” for Bitcoin’s mainstream development.