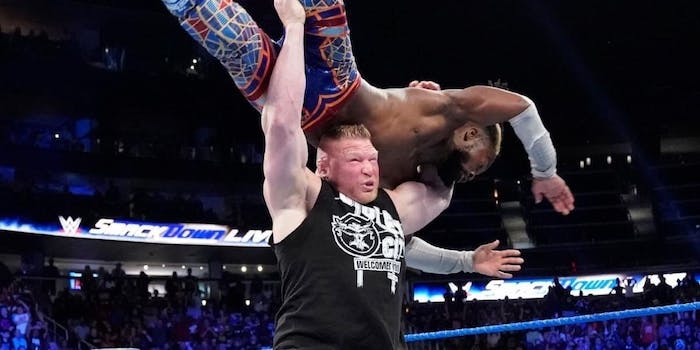 How to stream the WWE ‘SmackDown’ debut on Fox

Some very special guests will be there.

With AEW seemingly gaining ground on the world’s most dominant wrestling promotion, WWE is about to make one of its most important steps in decades. The SmackDown show—which debuted in 1999 and was formerly shown at various times on the UPN, the CW, and USA—moves to Fox on Friday nights, and WWE is going all out to make the biggest possible network TV splash.

Dwayne “The Rock” Johnson, one of the biggest wrestling superstars in the sport’s history, is scheduled to return to this show for the first time in six years. Plus, the WWE previously announced that longtime standouts like Kurt Angle, Mick Foley, Hulk Hogan, Ric Flair, Sting, Trish Stratus, and Lita will make appearances, as well.

FINALLY…I come back home to my @WWE universe.
This FRIDAY NIGHT, I’ll return for our debut of SMACKDOWN!
LIVE on @FOXTV.
There’s no greater title than #thepeopleschamp.
And there’s no place like home.
Tequila on me after the show 😈🥃#IfYaSmell🎤 #Smackdown#RocksShow #FOX pic.twitter.com/V5i4cxqIqH

This show is a huge deal for the organization. In June 2018, Fox and WWE signed a five-year deal worth a total of more than $1 billion. With WWE still successful with Raw on Mondays and its developmental NXT program on USA on Wednesdays, the newest version of SmackDown will keep high-level wrestling on TV for more than half of the workweek.

In actual wrestling action, Kofi Kingston, who has had a fun run as champion since he won it at WrestleMania, will face Brock Lesnar for the WWE title, and four of the top women’s stars will be in the ring at the same time as Charlotte Flair and Becky Lynch team up to face Sasha Banks and Bayley in a tag-team match.

Here’s everything you need to know to live stream the weekly edition of WWE SmackDown.

WWE SmackDown: How to watch pro wrestling on Fox

Even if you’ve said goodbye to cable services and you exclusively stream the content you watch, you can still watch SmackDown. Every major live streaming service offers the Fox channel, and each one allows at least a one-week free trial. That includes YouTube TV and DirecTV Now.

Some of the best options to stream Fox are listed below.

If you’re a big-time sports fan, FuboTV might just be your best streaming service option. If you love international soccer and you’re a Spanish speaker, FuboTV also offers various add-on packages, including Fubo Latino and Fubo Português. Plus, you can get your pro wrestling fix every Friday night. (Here’s the complete FuboTV channels list.)

Hulu is a great way to live stream TV (it has nearly 60 channels, including Fox and all the major broadcasting networks) or to watch its massive on-demand library of movies, TV shows, and original series. Hulu lets you do both. Thanks to that versatility, Hulu with Live TV is a great option. It’s also the best way to bundle your streaming services into one place. (Here’s the complete list of Hulu Live TV channels.)

If you want to watch SmackDown online via Sling TV, you’ll need to be subscribed to either Sling Blue ($25 per month) or Sling Orange + Blue ($40 per month). Both of those packages normally include Fox and FS1 (and it’s still a nice perk that Sling subscribers can order a la carte packages). Sling TV also offers a special Latino package for bilingual viewers. Sling TV is currently offering a deal where you can subscribe for 40% off the regular price for the first month of your subscription. That means Sling Blue would cost $15, and Sling Orange + Blue would cost $25. (Here’s a complete guide to Sling TV channels and our Sling TV review.)

Unfortunately, due to a contract dispute as of Sept. 26 Sling no longer carries Fox, FS1, and FS2. But there is a workaround.

AirTV solves one of Sling’s biggest problems: The inability to receive all of your local channels. By purchasing a basic AirTV for $79.99 or the AirTV Player for $119.99, you can merge those local channels into your Sling TV, (or on your mobile device if you have the basic AirTV). As the Daily Dot wrote in its AirTV review, “It’s practically magic.” Even if SmackDown isn’t on Sling at the moment, you can still catch it with AirTV.

But AirTV—which has no monthly fee—serves to strengthen one of Sling’s biggest weaknesses compared to other live streaming services like Hulu with Live TV, YouTube TV, and PlayStation Vue. All those services have plenty of local channels. While select NFL and college football games (on Fox, FS1, and FS2) (and WWE’s Friday night show) are no longer on Sling, you can still catch Fox with AirTV.

If you’d like to watch live TV directly from your gaming console, PlayStation Vue is definitely your best bet. PlayStation also works with streaming devices like Roku and Amazon Fire products, but what separates PlayStation from the rest of the streaming services is that it’s also compatible with Kodi. No matter how you stream, you’ll get to choose from four tiers of channels, all of which include Fox, FS1, FX, HGTV, Syfy, and more. You can see the full list of PlayStation Vue channels here. Two other great perks: You can stream on up to five devices at once, and there’s also unlimited cloud DVR.

Locast is a free not-for-profit service that allows people to watch all of their local channels, including the Fox affiliate, for free from their web browsers. The unfortunate part is that Locast isn’t available everywhere. If you live in New York City, Philadelphia, Chicago, Houston, Denver, Boston, Dallas, or Washington, D.C., you’re in luck. That’s because Locast is available to the residents in those cities. If you have Google Chromecast or a comparable device, you can then “cast” SmackDown to your big screen.

Here’s everything (that we know about so far) that you can look forward to on this week’s installment of SmackDown (“c” indicates current titleholder):