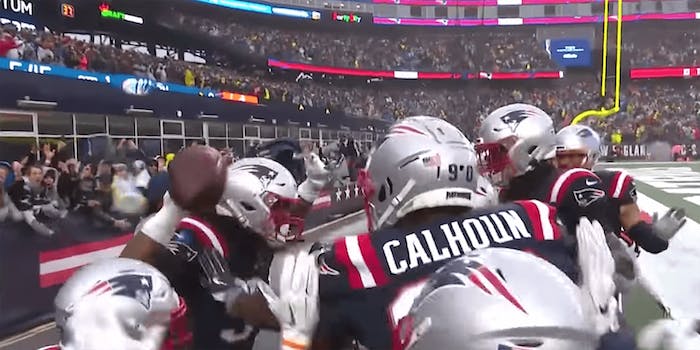 How to stream Patriots vs. Ravens on Sunday Night Football

The undefeated Patriots will face their best competition yet in the Baltimore Ravens.

Can anybody beat the New England Patriots? It’s possible that the Baltimore Ravens could do it, but it will be difficult.

So far, the Patriots’ combination of a league-leading defense and savvy play from quarterback Tom Brady has been a winning combination. Though this hasn’t been Brady’s best season, his solid 281 yards per game and good decision making have gotten the job done.

Last week’s game against the Browns followed the general playbook of how the Pats have won this season. Brady threw for 259 yards, but did not turn the ball over. Meanwhile, the defense sacked Baker Mayfield five times and intercepted him as well. The D also forced some key fumbles which more than made up for their inability to stop running back Nick Chubb.

Though the Pats look unstoppable, one silver lining for the Ravens could be that New England hasn’t played any good offenses yet. The stiffest competition they’ve faced statistically speaking so far is Pittsburgh, only at 22nd in Offensive DVOA.

Before its bye week, Baltimore posted a big statement win against Seattle. Quarterback Lamar Jackson ran for 116 yards and a touchdown, while Mark Ingram II added another 46 yards on the ground.  There aren’t a lot of run-first teams in the NFL, but Baltimore’s results speak for themselves. At 5-2 and leading the AFC North, the Ravens’ rushing attack is paying dividends.

If the Pats have had a defensive challenge, it has been the run. New England had trouble containing rushing yardage against the Bills, Jets, and the Browns. Since they haven’t faced much stiff competition, it is tempting to think that the Ravens could pull an upset here. so long as their ground game remains strong.

While an upset is possible, the Patriots still have the edge here. Jackson’s limited passing game has hurt Baltimore in their two losses, and the Ravens defense is middling (18th in Defensive DVOA) compared to New England’s elite unit (1st in Defensive DVOA). The Pats’ weaker unit, its offense, is still ranked a solid 13th by Offensive DVOA, not too far off from Baltimore (6th).

This game could be the most competitive that the Pats have had so far this year, but we still give Belichick and Brady the edge.

Julian Edelman, Wide Receiver: Edelman fantasy owners can breathe easy after last week. Despite the addition of Mohamed Sanu, Edelman still looks like the number one option in a passing game that could still use some more weapons. After he put up 78 yards and two touchdowns last week, trust Edelman until he gives you a reason not to.

Lamar Jackson, Quarterback: Though New England has a top-tier defense, the Ravens should still be able to run here. Jackson and Mark Ingram II could still have good days on the ground even if the Pats stifle Baltimore’s passing attack.

New England Patriots vs. Baltimore Ravens stream: What to watch for

This should be one of the most exciting games of the week. There is no other offense like the Ravens in the NFL, and if an attack is going to give the Pats trouble, it could be this one.

Even if Baltimore’s soft defense and weak passing game make them too one-dimensional to defeat the Patriots, this could be a good, close matchup.

Since both teams are sitting comfortably at the top of their divisions, this game is more about playoff picture than immediate urgency. The Pats could drop a couple of games and still retain home-field advantage in the AFC playoffs, but a Baltimore victory would be a statement win and would help move it toward at least some rounds at home. Simply put, if they want to go far in the post-season, the Ravens are going to have to beat New England sooner or later.

It could happen. But we think the Pats are the safe choice here. Odds are they keep their perfect season alive against a Ravens team that isn’t quite dynamic enough to be considered truly elite.