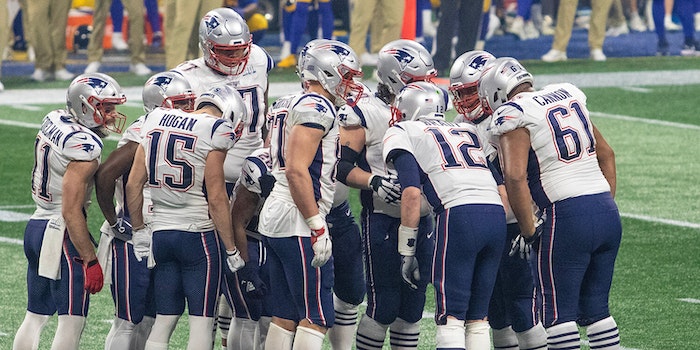 How to stream Patriots vs. Giants on Thursday Night Football

The upstart Giants were humbled last week, and now they head to New England to face their biggest challenge yet.

Last week, the Giants came back to Earth.

After several convincing victories directed by rookie quarterback Daniel Jones, the New York Giants’ offense had a terrible outing last week. And now, they have to face one of the best teams in the league, the New England Patriots, on the road.

Jones went an unimpressive 21 of 38 for 182 yards in Week 5. As he struggled in the passing game, his running game didn’t give him any help. The backfield really missed Saquon Barkley, as no Giant rushed for over 20 yards.

On defense, New York also had a terrible week. The Giants secondary had no answer for Adam Thielen, and cornerback Grant Haley looked particularly bad against the All-Pro. The run defense was equally ineffective against Dalvin Cook, allowing him over six yards per carry. They also committed a dumb taunting penalty that effectively put the game out of reach.

As the Giants showed cracks, the Patriots rolled against a terrible Redskins team. Everything went well for the Pats against one of the league’s worst teams. Brady threw well. The running backs were productive. The defense got pressure. It was a complete performance.

There is some reason for caution in New England, however, as the only decent team they’ve faced so far was Buffalo in Week 4. In that game, the Bills played the Patriots very close. Even against Washington, Tom Brady took four sacks from a weak Skins D. The Pats O-line has been unusually bad this season, allowing decent defenses to get lots of pressure on their aging star signal-caller.

New England is also fielding one of their worst receiving corps in recent memory. When Phillip Dorsett left the game last week, the Pats struggled. Rumor has it they will trade for a better pass catcher, but that likely won’t happen before Thursday.

Look for the Patriots to beat the Giants. But, don’t let recency bias fool you. Though New England is the better team, a solid performance from New York’s offense could keep this game competitive.

How to watch Patriots vs. Giants online

Other ways to watch Patriots vs. Giants online

Julian Edelman, Wide Receiver:  While Phillip Dorsett will likely come back, he might be a little slow as he nurses a hamstring injury. Josh Gordon has been fine, but not spectacular. With no other household names at receiver, look for Edelman to remain the top choice in New England until the team trades for better options.

Evan Engram, Tight End: It’s hard to love the idea of starting any Giants against this top New England defense, but if you must, go with Engram. He is averaging 75 yards a game and gets into the end zone from time to time.

Patriots vs. Giants: Why it matters

This isn’t the matchup of the week, but this game could be closer than expected. Daniel Jones has put together some good games in his short career, and this uneven Giants team will be one of the best teams the Pats have played to date this season.

New York is trying to stay afloat in a wide-open NFC East. While the Eagles and Cowboys are better teams, they are not unbeatable. It’s not out of the realm of possibility to imagine this team staying competitive.

New England is going to try to preserve home-field advantage throughout the playoffs for as long as they can now that the Chiefs have taken an upset loss. Right now, any loss could have playoff implications.

If the G-Men can knock off the Pats, it will change the trajectory of their season. But it’s hard to see that as a likely outcome as rookie QBs never win in Gillette Stadium.

That being said, don’t be surprised is this game is a bit more competitive than last week’s stats would lead you to believe.

New England is the better team, but with a sturdy yet unimpressive offense, this is not the best Pats attack we’ve ever seen.