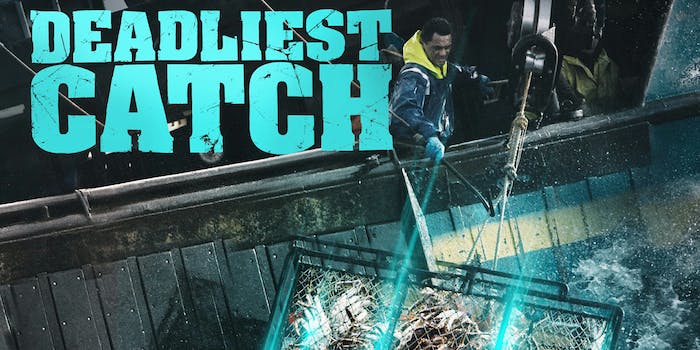 How to watch ‘Deadliest Catch’ for free

It's a thrilling hunt on the most dangerous seas.

For 14 years, Deadliest Catch on Discovery Channel has chronicled the real-life events aboard fishing vessels in the Bering Sea during the height of crab season.

The show’s namesake is no joke. Hunting Alaskan King crabs can lead to a high risk of injury and even death for the fishermen brave enough to tackle the Herculean task. The action comes naturally, with some of the coldest and stormiest seas on Earth. That’s in addition to the dangers of swinging crab pots, wet decks, and uneven surfaces from stern to bow.

Deadliest Catch also documents how deadly sea life can be from the perspective of hardened sailing veterans and newbies (greenhorns) alike. It’s no surprise the show’s theme song is Bon Jovi’s “Wanted Dead or Alive.”

Here’s how to watch Deadliest Catch online for free.

What channel is Deadliest Catch on?

When does Deadliest Catch air?

How to watch Deadliest Catch for free

Each of the following live TV streaming services offers Discovery Channel. They each come with a seven-day free trial so you can watch Deadliest Catch season 15 for free. There are variations between the services, so pick one that suits your streaming needs and budget.

For a more à la carte service, look to Sling TV. It offers two cable packages: Sling Orange and Sling Blue, both of which cost $25 per month. No matter which package you choose, you’ll get Discovery Channel. If you grab them both (Sling Orange + Blue) you can save $10 per month. Sling Blue offers more bang for your buck with over 40 channels, including sports necessities like FS1, NBCSN, and NFL Network. Here’s the complete guide to Sling TV channels and our Sling TV review.

Philo is the least expensive streaming service, but it has some limitations. You won’t find the sports channels that dominate other packages or local channels. However, it’s the cheapest way to gain access to Discovery at only $16 a month. You will also find the best deal on popular channels like Animal Planet, IFC, Lifetime, and more. You also get free cloud DVR, but shows recorded are deleted after 30 days, so binge responsibly.

How to watch Deadliest Catch episodes

If you want to watch episodes of Deadliest Catch after they air, there’s no better option than Hulu. The streaming service just slashed the cost of its ad-supported version to a mere $5.99 per month. Plus, you can catch up on episodes you missed from seasons 7-13 on demand. If you subscribe to Hulu with Live TV (featured above), you’ll get the on-demand portion of Hulu included for free. You can also upgrade to Hulu No Commercials for $11.99 per month.

Discovery puts various episodes online to stream for free. However, you’ll need to log in with either your cable provider or use a streaming service like PlayStation Vue or Philo to gain access. Just punch in your info when prompted and stream away.

If you’re always on the move, you’ll want the Discovery Go app, which works with most major streaming devices and has the same sign-in requirements to use Discovery.com. Not only will you be able to watch live programming, but you can also watch full episodes on-demand of shows like Deadliest Catch.