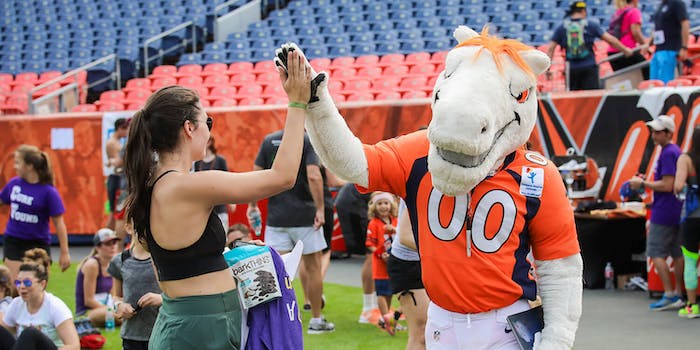 How to stream Chiefs vs. Broncos on Thursday Night Football

The Chiefs look to get back on track against a Broncos team trying to keep their season alive.

It’s tempting to imagine that a resurgent Denver Broncos team could keep pace with the Kansas City Chiefs in primetime, but it’s probably not going to happen.

Denver’s defense has looked good in recent weeks, as the Broncos have handled some of the NFL’s weakest squads in the Chargers and the Titans. Denver had an impressive seven sacks and three interceptions against Tennessee. But the Titans offense is also bad. In reality, this defense isn’t a world-beating unit: Football Outsiders had them at 16th in defensive DVOA entering Week 6.

To win games with a fading Joe Flacco under center, this defense would need to be a top-five unit. Against bad teams, the solid two-headed running game of Phillip Lindsay and Royce Freeman can help the Broncos dominate time of possession. But even in a shutout victory, Flacco only had 177 yards passing. The league’s best running backs couldn’t even ensure a winning team with those passing numbers.

By contrast, the Chiefs have had two bad weeks, losing to the Texans and the Colts, but that is no reason to panic. In both games, man coverage made life difficult for quarterback Patrick Mahomes while the terrible Kansas City defense couldn’t hold up under pressure.

Even in these losses, “limiting Mahomes” has meant that he still throws for about 300 yards, and that’s with a nagging ankle injury. Both games were close, and veteran coach Andy Reid will likely be adjusting to compensate for his team’s weaknesses.

Against good teams, the inability of the Chiefs to compete on defense, especially in terms of stopping the run, is a real problem, but it shouldn’t be enough to cost them here. The Chiefs gave up 4.7 yards per carry last week, but if Joe Flacco only throws for 150 yards, that may not matter.

How to watch Chiefs vs. Broncos online

Other ways to watch Chiefs vs. Broncos online

Tyreek Hill, Wide Receiver:  During Hill’s four-game suspension, you couldn’t predict who was going to lead the Chiefs’ offense. Every week, a new receiver was a favorite target. Those days are over. Hill is back and he is the man in the Kansas City passing game going forward.

Phillip Lindsay, Running Back: For the first few weeks of the season, this was definitely a platoon situation, with Freeman and Lindsay garnering similar yardage totals. In the last three games, Lindsay has pulled away from Freeman as the go-to choice in the Denver backfield.

Chiefs vs. Broncos: Why it matters

Don’t fall into the recency bias trap. The Chiefs are still elite and the Broncos are not.

Nonetheless, Kansas City isn’t just looking to win the relatively weak AFC West. A win here keeps the Chiefs ahead of a surprisingly frisky Raiders team, and also keeps them in the conversation for the best team in the conference.

The undefeated Patriots are already pulling away from the pack and the Texans now own a tie-breaker against Kansas City. Andy Reid’s team needs to win against bad teams if they want to stay towards the top of the AFC, and this is the place to start.

If ever there was a week for this Chiefs team to get right, this is it. They had better take advantage of it.