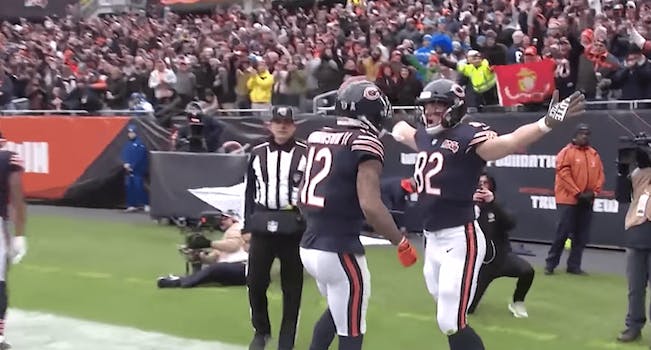 Sunday Night Football: How to stream Bears vs. Rams live

Can the Rams get back on track against the weak Chicago Bears offense?

Both the Chicago Bears and the Los Angeles Rams need to get their acts together.

In a stacked NFC North, it is unlikely that the Bears are going to the playoffs, but they do need to figure out if this team can win with Mitch Trubisky under center. The Rams have taken a few unexpected losses this season, and while last year’s Super Bowl finalist is not in danger of missing the playoffs entirely, they do sit behind the Seahawks and the 49ers in their division.

Jared Goff just hasn’t been himself this year in Los Angeles, and that problem came to a head last week against Pittsburgh. Converting only 1 of 14 third downs, the Rams managed just 12 points (a touchdown, field goal, and safety) in a 17-12 loss.

Chicago looked somewhat promising early in the season despite its limited quarterback play. The idea was that their defense and running game could overcome Trubisky’s deficiencies. The defense has remained stout (8th in Defensive DVOA) and the running game has improved, but most weeks, it hasn’t been enough. The Bears only narrowly beat Detroit even with Lions backup quarterback Jeff Driskel filling in for Matt Stafford.

Let’s see if either of these teams can use this week to turn things around. Here’s everything you need to know to live stream Bears vs. Rams, including what to watch for on the field.

Both Sling Blue ($30 per month) or Sling Orange + Blue ($45 per month)  include NFL Network and a number of sports channels—like three ESPN channels and NBCSN—and it’s still a nice perk that Sling subscribers can order a la carte packages. Sling TV also offers a special Latino package for bilingual viewers. Sling TV is currently offering a deal where you can subscribe for 40% off the regular price for the first month of your subscription. That means Sling Blue would cost $15, and Sling Orange + Blue would cost $25. (Here’s a complete guide to Sling TV channels and our Sling TV review.)

But AirTV—which has no monthly fee—serves to strengthen one of Sling’s biggest weaknesses compared to other live streaming services like Hulu with Live TV, YouTube TV, and PlayStation Vue. All those services have plenty of local channels. While select NFL and college football games (on FOX, FS1, and FS2) are no longer on Sling, you can still catch FOX games with AirTV.

Chicago Bears vs. Los Angeles Rams stream: What to watch for

Last week, the Chicago Bears showed how they can win games. The defense played well enough to keep the score low while the running game grinded and Trubisky protected the ball. Even so, the game was close.

Bears fans have been glad to see David Montgomery emerge as a dependable running back in recent weeks, but he can only do so much. Most weeks, Trubisky’s 173 yards through the air wouldn’t have been enough. In a loss the week before, he only threw for a pathetic 125 yards.

Chicago does have a chance here because the Rams have been dysfunctional in their own right. Jared Goff hasn’t been as bad as Trubisky, but he hasn’t been himself either. Last week, he threw for 243 yards and two interceptions. In addition, his receivers have been banged up and Todd Gurley just isn’t the world-beater he once was.

Despite their weakened offense compared to a year ago, the Rams are the most complete team of these two. A tough division has masked the fact that LA is still a pretty good team. With the fourth-ranked defense by DVOA, led by the always dangerous Aaron Donald, this team can still beat anyone if things go their way

The bottom line is that while Goff has had some bad games, the Rams are the better team than the Bears. Unless they have another terrible outing, look for the Rams to find a way to win and keep their playoff dreams alive.