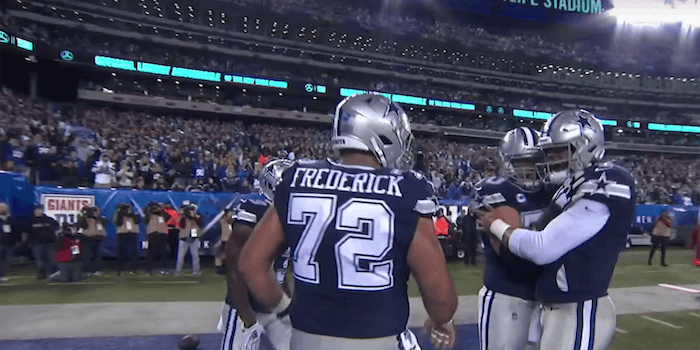 How to stream Cowboys vs. Vikings on Sunday Night Football

Two of the league's best offenses face off in an NFC shootout.

When you look in the mirror, do you like what you see? If your answer is “yes and no,” you can probably relate to the Dallas Cowboys and the Minnesota Vikings.

The Vikings and the Cowboys have two of the best offenses in the NFL, with some of the same strengths and weaknesses. Both teams have an all-star running back and an impressive receiving corps. Both teams are capable of putting together the best offensive performance in the league in any given week. And yet both of these teams are prone to losing winnable games and making dumb mistakes. Though both teams are top 5 in Offensive DVOA, each of them have had off weeks, leading to three losses each.

Which of these teams will be able to edge out their offensive doppelgänger in prime time? Here’s everything you need to know to live stream Cowboys vs. Vikings, including what to watch for on the field.

But AirTV—which has no monthly fee—serves to strengthen one of Sling’s biggest weaknesses compared to other live streaming services like Hulu with Live TV, YouTube TV, and PlayStation Vue. All those services have plenty of local channels. While select NFL and college football games (on FOX, FS1, and FS2) are no longer on Sling, you can still catch FOX games with AirTV.

Dallas Cowboys vs. Minnesota Vikings stream: What to watch for

This should be a competitive game between two teams that are hungry to set themselves apart in the NFC. Now that the Packers looked very mortal last week against the Chargers, the Vikings may have a path to first place in the NFC North. The Cowboys are comfortably in the lead in their division, but they want to set themselves up for the best playoff seeding possible.

Dallas has the number one offense by DVOA in the NFL. Ezekiel Elliot’s running, Amari Cooper’s receiving, and Dak Prescott’s passing have all been operating at a high level. If there is a ding on this attack, it is that they can be a little conservative. Crazy as it sounds, that means this league-best offense could get even better.

If there is a big difference between these two teams, it is on defense. Dallas needs to get better at rushing the passer and improve its middling D overall. The Cowboys signed Michael Bennett to help with just that. This team has the talent, with DeMarcus Lawrence, Robert Quinn, Maliek Collins, and Leighton Vander Esch, but that hasn’t translated to production.

Though the Vikings are coming off a tough loss to a Patrick Mahomes-less Chiefs, Minnesota still has one of the most complete teams in the NFL. Kirk Cousins has improved from his shaky early-season performance, playing disciplined effective football. Dalvin Cook remains a top rusher in the league and the receivers are some of the best, despite an injury to Adam Thielen and an off week for Stefon Diggs.

Minnesota also has a top ten defense. Defensive ends Everson Griffen and Danielle Hunter remain the envy of the league with 5.5 and 8.5 sacks on the season respectively.

Another thing these teams have in common? Coaches with a tendency to get in their own way. Mike Zimmer and Jason Garrett have both gotten heat from their respective fan bases for conservative play-calling and a tendency towards head-scratching decisions.

Let’s give the Cowboys the edge here, just because their offense has been a little more explosive. But, with the more well-rounded team, Minnesota could keep this competitive and pull out the victory.

Both of these teams have the talent to go deep in the post-season. They just have to keep working on staying out of their own way.