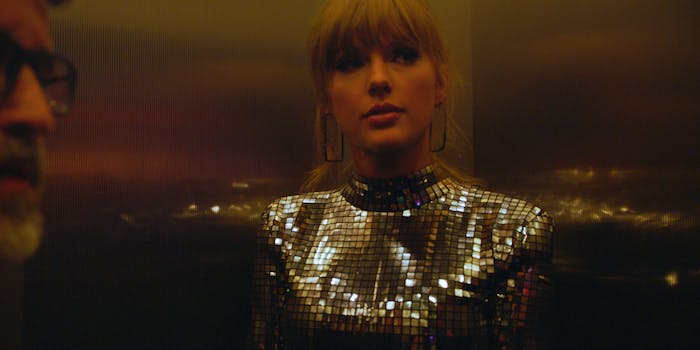 Taylor Swift is nothing if not self-aware. Several times throughout Miss Americana, the new Netflix documentary from director Lana Wilson (After Tiller), the singer expresses that she knows exactly what people think of her, how something she does or might do is perceived, and that she craves praise and wanting to be liked. She’s more than aware of how often female musicians have to reinvent themselves, especially in comparison to male musicians. And she knows that parts of her life aren’t normal at all, something she notes after passing the fans who waited just outside her home just to catch a glimpse of her.

RELEASE DATE: 1/31/2020
DIRECTOR: Lana Wilson
STREAMING: Netflix
’Miss Americana’ is a raw and in-depth look into the world of one of the world’s most famous performers as she pushes herself further as a musician and someone whose voice has power.

Miss Americana is a deconstruction of the myth of Taylor Swift that’s been perpetuated by a multitude of factions over the more than a decade she’s spent in the spotlight, and for Swift fans, it’s a much-watch. Swift gave Wilson and her crew access to her process of making an album, so we’re given a front-row seat into everything from her songwriting sessions and piecing it all together. It’s also a personal view into just how the world’s perception has affected her and how she eventually pushed through to find herself to a much healthier place—and in a position to speak out politically.

Some of the cornerstones that made Swift who she is are more than familiar to those who’ve followed her career over the years. There’s Kanye West interrupting her VMAs acceptance speech in 2009, something that Swift acknowledged took her on many psychological paths, not all of which were beneficial. Subsequent fallout between the two emerged after Kim Kardashian released footage of a phone call between West and Swift over him name-checking her in “Famous,” and Swift breaks down when talking to her mother Andrea—a constant and supportive presence throughout Miss Americana—about how a hashtag about how much people hate her wears her down. When Reputation fails to get any major Grammy nominations, she immediately strives to make a better album, a showcase of the sheer drive she had to push herself farther and prove that she earned it.

Swift was someone who thrived on praise and who spent her entire life trying to be nice and kind because that was who she was supposed to be; she built her entire self-worth on it. Each of these things is devastating in their own way, and working her way past that is in and of itself a journey. “I had to deconstruct an entire belief system, toss it out, and reject it,” she says. At one point, Swift admits she used to stop eating after she would see photos of herself with a stomach or when the tabloids speculated that she was pregnant, but it’s something she no longer partakes in.

While Swift’s controversies always loom in the shadows, Miss Americana also allows Swift to revel in the smaller moments when she’s able to get them—and in the things that bring her joy. During a songwriting session, she reveals that she only had a burrito for the first time within the past couple of years. Archival footage documents Swift’s lifelong love of performing, and the songs used throughout the documentary showcase a wide mix of her discography, including a new song that plays during the credits (and is excellent).

But Miss Americana isn’t just a personal exploration. It’s one where Taylor Swift—who won a trial against the man who groped her and sued her after he was fired for it—explores how she can use her own privilege because she’s at a point in her life where she can no longer stay silent. Her foray into politics may have taken a long time, but a meeting between Swift and her representation (which included her parents) indicates how even something as simple as endorsing a candidate is a major step; in the country world, Swift explains, the Dixie Chicks are used as an example of why country stars should keep politics out of their music.

Miss Americana probably won’t change many minds of the people who have already made up their minds about Swift or downright hate her, but when artists’ images are planned and curated, a documentary like this is the kind of window into the life of a famous musician that we’re not often privy to seeing, even if we’ll never ever quite get the whole picture.