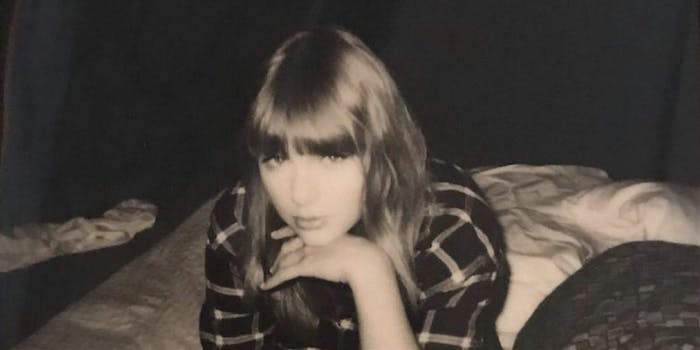 She's changed her mind about keeping her views quiet.

Taylor Swift endorsed the Democratic candidates for Tennessee’s federal elections while urging her followers to register to vote in a post to Instagram Sunday night.

Swift, who has mostly stayed out of the political fray since the 2016 election as other celebrities used their platforms to elevate political platforms or become activists, opened up about some of her own evolving views.

“In the past I’ve been reluctant to publicly voice my political opinions, but due to several events in my life and in the world in the past two years, I feel very differently about that now,” she wrote. “I always have and always will cast my vote based on which candidate will protect and fight for the human rights I believe we all deserve in this country. I believe in the fight for LGBTQ rights, and that any form of discrimination based on sexual orientation or gender is WRONG. I believe that the systemic racism we still see in this country towards people of color is terrifying, sickening and prevalent.”

Swift also spoke out against her current senator, Marsha Blackburn (R-Tenn.), and while she said that she supports having more women in Congress, Blackburn’s record “appalls and terrifies me.” She threw her weight behind Blackburn’s opponent, Phil Bredesen, urged her followers to make sure they’re registered to vote before their state’s registration deadline.

In her post, Swift referenced her own experiences over the past two years, which included winning a lawsuit against a former DJ whom Swift said groped her. Swift’s counter-lawsuit was for $1, a symbolic gesture. She became one of the women who appeared on Time magazine for the 2017 Person of the Year issue as one of the “Silence Breakers.”

But while she may have been trying to stay apolitical by not saying anything, many have interpreted that as her own political statement or sign of complicity. She never revealed who she voted for, but some believe that she cast her vote for President Donald Trump while others tried to interpret her clothing choices on Election Day 2016 to indicate that she voted for Hillary Clinton. She’s been criticized for not speaking out against the white supremacists who’ve elevated her (even though she has before), going as far to sue a blogger who wrote about Swift’s far-right fans. Her attempts to stay apolitical since 2016 and focusing on the music has received an increasing amount of pushback.

Thank you for the kind words @taylorswift13. I’m honored to have your support and that of so many Tennesseans who are ready to put aside the partisan shouting and get things done. We’re ready for it. Last day to register to vote is October 9. https://t.co/6Xd6YyaJCG pic.twitter.com/CatUBkXPKe

And while Swift’s post might be considered too little, too late by some, others are glad (and even shocked) that she’s finally speaking out. Swift has one of the most popular accounts on multiple social media platforms, and her voice, no matter what she says, can reach a wider (and in some cases) much younger audience.