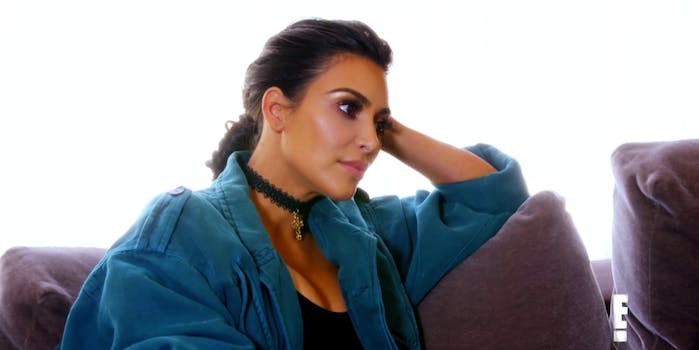 Did Kim Kardashian just expose Taylor Swift as a liar?

After Sunday’s episode of Keeping Up With the Kardashians that addressed the debate over Kanye West’s “Famous” and how much Taylor Swift knew about its infamous lyrics, Kim Kardashian released recordings of their conversation about the song via Snapchat.

Some people knew that something big was on its way after Kardashian tweeted about National Snake Day, although fans of KUWTK had an inkling after E! released a clip of Kardashian talking to her sister Kourtney about the GQ magazine interview she had just done—one which she discussed Swift.

“When we were first dating, everyone would talk shit and he’d always have my back,” Kardashian told her sister. “At this point I really don’t give a fuck, so I’ll do whatever to protect my husband.”

Theres a BIG difference between shading someone and speaking the truth!

Once KUWTK ended, Kardashian directed her millions of followers to her Snapchat account, which had just dropped a series of video snaps regarding the very thing discussed in the episode.

do u guys follow me on snap chat? u really should ;-)

Kardashian was able to direct many—even people who don’t care about celebrity gossip or the apparent feud between the Wests and Swift—to Snapchat to live out a story (likely an edited version of it) on their phones. And with entire social media accounts devoted to archiving Kardashian’s Snapchats, it didn’t take long before it transcended platforms. You can watch all of the videos on Twitter and Instagram, but if going through several micro videos isn’t your thing, Fader’s Naomi Zeichner transcribed the whole exchange.

“And you know, if people ask me about it,” Swift said in the video, “I think it would be great for me to be like, ‘Look, he called me and told me about the line before it came out.’ Like, joke’s on you guys, we’re fine. You guys wanna call this a feud, you wanna call this throwing shade. But right after the song comes out, I’m gonna be on a Grammy red carpet and they’re gonna ask me about it. And I’m gonna be like, ‘He called me.’”

This all started back in February when West, Kardashian’s husband, first released The Life of Pablo. In his song “Famous,” West referenced Swift by name and rapped, “I feel like me and Taylor might still have sex / Why? I made that bitch famous.” In response, Swift said that she objected to the “strong misogynistic message” of the song and never knew about the “I made that bitch famous” line. West, however, said that Swift gave her blessing to the song.

Swift later made a reference to the controversy during her Grammys acceptance speech for album of the year. The tiff more or less faded into the pop culture stratosphere for months until Kardashian addressed it in her GQ cover story. She claimed that West did ask Swift for approval—and there was video proof.

“She totally approved that,” Kim says, shaking her head in annoyance. “She totally knew that that was coming out. She wanted to all of a sudden act like she didn’t. I swear, my husband gets so much shit for things [when] he really was doing proper protocol and even called to get it approved.” Kim is on a roll now, speaking faster and more animatedly than at any other point during our time together. “What rapper would call a girl that he was rapping a line about to get approval?”

According to Kardashian, Swift’s attorney later sent a letter calling for the video footage to be destroyed, even though she wasn’t exactly sure how Swift found out about the recording in the first place. A representative for Swift doesn’t deny the phone call took place but said the lyrics “that bitch” were never discussed.

Once the videos were out, Twitter was beside itself—and Khloe Kardashian played hype woman for her sister.

KIMBERLY JUST SNAPCHATTED PART OF THE PHONE CONVO BETWEEN KANYE AND TAYLOR.

RED ALERT THIS IS THE FINAL ACT OF HAMILTON.

I haven't seen my TL this united in a while. Thanks, Taylor Swift. pic.twitter.com/4j2WVn2t7K

Kim is a savage! Don't fuck with her man hunni #KUWTK

A few hours after Kardashian posted the video, Swift responded with a screengrabbed note apparently from an iPhone in which she called the portrayal—that she was painted as a liar by Kardashian—as “character assassination.”

As Becca Laurie notes, Swift may have had part of her response on hand already.

According to the GQ statement, Swift was on vacation when the phone call occurred (although it doesn’t explicitly state where). West, however, was likely in California, which has a two-party consent law on recording—basically, you need consent from all parties to be in the clear to record a conversation.

Update 9:47am CT, July 18: According to the Fader, West may have been in New York at the time of the recording. The state has a one-party recording law.

But as TMZ notes, Swift knew about this recording well in advance of Sunday’s leak and reportedly threatened legal action. A TMZ source said that West was in a Los Angeles studio at the time of the recording, giving Swift a legal foothold for a lawsuit.