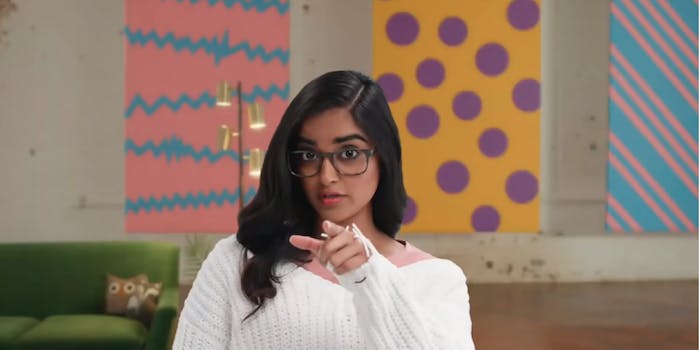 'Brainchild' has a new set of brain games.

The show is produced by the same company behind National Geographic’s Brain Games, but it’s more comedic. Brainchild better recalls the interactive challenges of HBO’s ’80s kids show Braingames. A companion to Netflix’s recent Bill Nye revamp, and another entry in its growing explainer genre (Follow This, Explained), the 13-episode Brainchild covers topics like space, creativity, memory, and germs. Pharrell Williams served as executive producer, giving input on creative decisions despite not taking much of a hands-on approach on set, according to host Sahana Srinivasan. (He appears in the “Space” episode, asking NASA astronauts about the most “awe-inspiring” thing they’ve seen up there.)

Pharrell’s touch is subtle, and Brainchild is more than just aesthetic. In the aughts, TV science shows have essentially become YouTube shows, and while Brainchild has that vlog feel, it also sets itself apart with representation. Srinivasan, a 22-year-old senior at the University of Texas at Austin, auditioned for the series by simply setting up a camera in her apartment and recording, vlog style. Innovation Nation‘s Alie Ward stars alongside Srinivasan as the “science friend” who adds her own expertise about different topics in each episode, but also asks more questions.

A Netflix show where two women talk about science provides a nice buffer to science series like Bill Nye Saves the World and Adam Ruins Everything, and popular YouTube science shows like Vsauce and AsapSCIENCE. But Srinivasan says it goes even deeper than that. “In the STEM and STEAM fields, there’s a lack of representation of women, and we’re hoping that shows like this will inspire young women to go into science fields,” she says. “But also, people of color and Indian women, too. I’ve had people reach out to me on Instagram and say, ‘It’s really cool to see representation and to see myself on the screen.’ Also for acting, too. Not just science.”

Srinivasan also does standup comedy, and the series benefits from her delivery. She says she had freedom to add her ideas in the writing and editing process, to ensure it was authentic and felt like her voice. (The creators brought in researchers to make sure the science part was legit, too.)

But Srinivasan also had to keep audience in mind. While adults will find something to engage with in Brainchild, the target demo comprises teens and preteens. “It is a challenge to write comedy that doesn’t involve inappropriate content because it’s so easy to revert to that,” she says. “I think if you’re able to do that sometimes it’s even funnier, classier.”

Srinivasan’s favorite episode is “Space”—she also gets to act opposite a puppet in the “Oceans” episode—but quite a few parents seem to be tweeting about the show’s first episode, “Social Media,” which deconstructs the forced perspective of selfies, humblebrags, and cyberbullying. She says they were careful not to talk down to kids, instead asking them to get involved and come to their own conclusions.

“We don’t think of [social media] as science, but there is a lot of science involved in why we like things,” she says. “We don’t really promote it as ‘social media is bad.’ We kind of explore the pros and cons. I know a lot of kids would be turned off if it was like, ‘You shouldn’t do anything with social media,’ because it’s also good.”

Brainchild is also compatible with the classroom, and curriculum from each episode can be downloaded on its site for middle and elementary schools. The show doesn’t tackle any controversial topics, and certain interactive challenges and bits will definitely engage kids more than adults. But it does evoke that sense of wonder that might have been extinguished by the rigors of adult life.