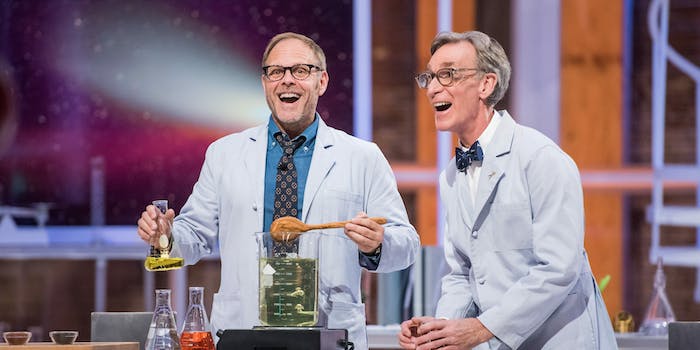 It’s been more than 20 years since audiences were first introduced to Bill Nye, the scientist and entertainer who helped make science fun for a generation of viewers. Now, like so many of our ’90s favorites, he’s back.

Bill Nye Saves the World is an evolution of the original, tapping into some of what made Bill Nye the Science Guy fun, but not without some experimental hiccups along the way. Some fans will inevitably compare Nye’s new endeavor with his Emmy Award-winning educational series, which shares the explanations of science and chants of “Bill! Bill! Bill! Bill!” But where Bill Nye the Science Guy was geared toward children, Bill Nye Saves the World aims at the children he likely taught when they were younger, now grown up.

The show is less about “What is this cool thing?” and more “Here’s a scientific topic that will affect us and the Earth, now what do we do with that?” (Though the show does include definitions of relevant jargon your average fan of science might not know.)

Filmed in front of a live studio audience, Nye introduces a new topic every episode with a mix of experiments and explanations, reports from special correspondents, and a wide-ranging discussion with a panel of experts. They’re more complex than what fans are usually used to, and Nye and his guests could easily spend more than 30 minutes discussing them.

Nye isn’t beholden to the idea of presenting facts and conspiracies as two equal options in a scientific debate in the name of impartiality. So for episodes where scientists state something as fact, Nye doesn’t have to entertain alternate viewpoints that have no basis in fact. Episodes around these topics—like vaccines, alternative medicine, and climate change—focus less on whether it exists and more on how, which can lead to more nuanced and fascinating discussions. Climate change in particular is something Nye has spoken extensively about.

For other topics that don’t necessarily have a right and wrong answer, the discussion can sometimes wander astray. Episodes that don’t have a cohesive conversation—most visible during expert panels—are the weakest part of the series. Nye usually participates as a guest in discussions (with panels containing other familiar faces), but ultimately he’s the host. He gets off to a rocky start in that role, but he does improve over the course of the six episodes offered to critics.

Nye’s correspondents and experiment guests include celebrities, scientists, and some of Nye’s real-life friends, and they offer new perspectives on topics even scientists might not have considered. He still pulls off wacky experiments, whether he’s using a Pepe the Frog-shaped shredder, riding in a self-driving car to get ice cream, or bringing in an MLB power hitter to illustrate a bigger point. The experiments are more complex than we’re used to seeing, but  Nye and his guests are clearly having fun with everything. Fortunately he still has his handy blue lab coat, which he puts on before performing experiments.

And you can’t argue with the timeliness of some of his episodes, some of which could be ripped from recent headlines.

Bill Nye Saves the World is a work in progress, but it’s sprinkled with enough nostalgic factors to satisfy his older fans without being completely overwhelmed by them. Nye might not save the world on his own, but he does offer the tools and the knowledge for viewers to join the fight.

All 13 episodes of Bill Nye Saves the World drop on Netflix April 21.