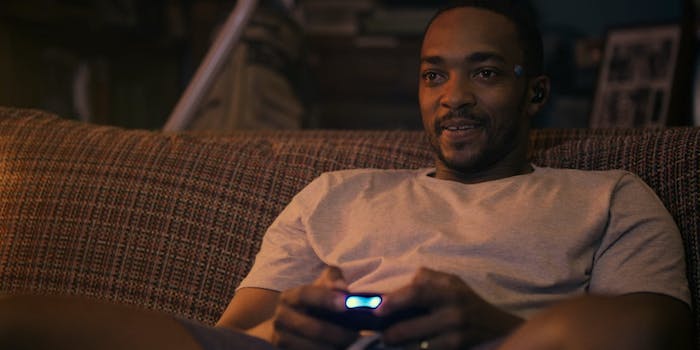 The episodes are uneven, but one in particular will definitely get people talking.

Over eight years, the Black Mirror franchise has picked at our collective anxiety about technology and the future of human connection. But in season 5, the show seems to have evolved from unnerving us to digging deeper into the emotional realm.

Like its early seasons, the long-awaited Black Mirror season 5 is just three episodes. It’s perhaps a bookend to December’s Black Mirror: Bandersnatch, which got people to interact but didn’t have much of a narrative. Unfortunately, lack of narrative continues to be an issue here.

First, the so-so episode: “Smithereens” features Fleabag’s “Hot Priest” Andrew Scott as Chris, a ride-hail driver who’s having a difficult time with the loss of his fiancée. He’s fixated on Smithereen, a ubiquitous social media platform that has a distracting pull on users, driven home by a scene in which Chris flees a cafe full of phone drone. He takes a young Smithereen intern (Damson Idris) hostage after faking an alternate route, and the real motivation for his actions slowly becomes clear.

There are moments when the episode touches on reality: Smithereen’s COO quickly psychoanalyzes Chris based on his posts, and fellow employees become detectives with unfettered access to personal data. The company’s Jack Dorsey-esque founder (a shirtless Topher Grace) is interrupted on a silent retreat to address the situation and speak with Chris, and he can’t help but feed him talking points.

At its core, the episode is about connecting with another grieving person. But the “social media is bad” angle probably would have been more resonant in, say, 2013. Black Mirror has always stopped short of telling us that, preferring instead to show us all the different endings. The episode doesn’t unnerve the way season 1’s “The Entire History of You” does, but it keeps the Black Mirrorverse intact: Smithereen and Bauer were referenced in one of Bandersnatch’s endings.

The least successful episode with the highest-profile star is “Rachel, Jack, and Ashley Too,” which stars Miley Cyrus as Ashley O., a pop star who’s grown weary of having to put on a smile and sing the same song (in this case, a Disney-fied version of Nine Inch Nails’ “Head Like a Hole”). Sisters Rachel and Jack are still navigating the loss of their mother, and their exterminator dad is shell-shocked. Rachel retreats into a friendship with Ashley Too, a robot version with the real Ashley’s voice. But when the real Ashley is compromised by her controlling manager, the doll finds its (Ashley’s?) voice, and it evolves into another episode altogether.

It’s a meta look at how isolating fame is, no doubt informed by Cyrus’s own experience. Her acting is solid, but the plot starts to sag under the weight of multiple ideas being floated: fandom, AI, mental health, fame, loneliness, grief. The episode also doesn’t dig that deep into the power structures that keep pop stars (particularly women) exploited and running on empty. I wanted more blood, more bile, more Her Smell.

The episode that will definitely spark the most conversation is “Striking Vipers,” which focuses on two longtime friends, Danny (Anthony Mackie) and Karl (Yahya Abdul-Mateen II), who reunite at Danny’s birthday party after a year apart.

Danny has settled into domestic life with his wife, Theo (Nicole Beharie), and they’re trying for another child. But he starts spending more nights with Karl playing Striking Vipers, the fighting game they used to play in college—only this updated VR version lets you inhabit different characters and genders. Danny is in a rut in the ‘burbs; Karl is a successful but lonely bachelor in a downtown loft. This is how they (re)connect. (Another reference to Bandersnatch: The game is made by “TCKR,” which might be an updated version of Tuckersoft.)

It ties into other video game episodes of Black Mirror—”Playtest,” “USS Callister”—but opens up a discussion about sexuality, identity, and fidelity, telling a story that hasn’t been represented on Black Mirror before. Perhaps that’s why it feels weird that they didn’t explore Danny and Karl’s relationship more. We get a look at the relationship between Danny and Theo, and the weak points in their marriage, but the episode renders Danny and Karl somewhat one-dimensional, two men who regress into playing video games to connect. That certainly is a reality for men, but the show misses an opportunity to examine the nuances of masculinity and intimacy. If Black Mirror has moved from telling future stories to telling right-now stories, it might need to readjust.