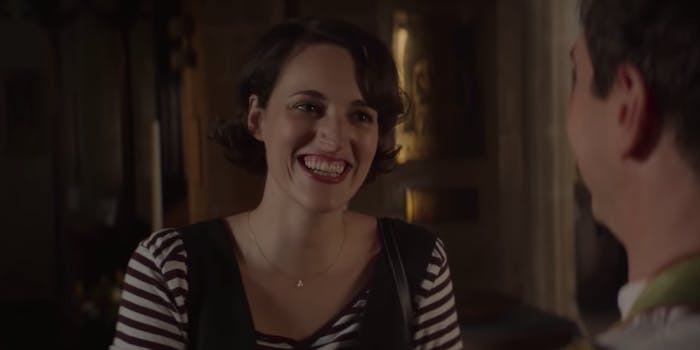 Phoebe Waller-Bridge explores love and religion as an atheist in the second season of the British series.

Fleabag season 2 opens with its eponymous protagonist wiping blood off her face before turning to the camera and announcing with a smile, “This is a love story.” Those familiar with Phoebe Waller-Bridge—the creator, writer, and star of the British comedy-drama series—know that this sentence essentially translates to, “You’re about to have your heart smashed into a million pieces.”

The second and final season of the series, which is available to stream on Amazon Prime May 17, paints a funny and quietly devastating portrait of women and the choices they face. This seems to be Waller-Bridge’s personal brand, and it’s why her work appeals to a lot of millennial women (including Taylor Swift). Since creating Fleabag, which is based on her brilliant one-woman play, Waller-Bridge has gone on to develop another popular series that features complex women characters: BBC America’s Killing Eve. She’s also been tapped as a writer for the upcoming James Bond film. We’re clearly going to see a lot more of Waller-Bridge’s work in the future. Still, it’s hard to say goodbye to Fleabag and the character that jumpstarted her career.

The first season of Fleabag, which premiered in the U.S. on Amazon Prime in 2016, was about Fleabag attempting to move on with her life after the death of her best friend, Boo. We saw Fleabag work through her pain while presenting herself to the world as someone who is doing just fine. Of course, she wasn’t fine, and viewers experienced every emotion Fleabag was feeling, thanks to her character breaking the fourth wall throughout the series. It’s Waller-Bridge’s comical expressions and asides to the viewer that make Fleabag feel intimate and personal.

Fleabag continues to address the audience in season 2, but there’s a meta twist. Another character becomes aware that Fleabag is conversing with the audience, or rather talking to herself in her head. This character is Fleabag’s love interest: a priest (Andrew Scott) who is marrying her dad and stepmom. It’s an interesting choice for Fleabag, a self-described atheist. The Priest (who, like Fleabag, is never given an actual name) asks her where she goes whenever she addresses the audience. These scenes are uncomfortable to watch, but they effectively show that the Priest sees something in Fleabag that others in her life ignored. It could also be a comment about religion, but that’s left up to interpretation.

Fleabag’s interest in the Priest sets up several great comical moments. She googles celibacy to find out if there’s a way for her to have sex with him. She flirts with the Priest at church events. She (mostly) abstains from sleeping with other men. For a while, it’s easy to enjoy Fleabag’s crush and be happy for her. But you know even before the romance begins that it won’t end like a happy romantic comedy, because Waller-Bridge does not write romantic comedies. She writes excruciatingly real women characters who crave sex and love, but also seek a sense of belonging in the world. They are trying to figure out what everything means. They have desires outside of being in a relationship. In this season, Fleabag explores religion, but she also interacts with a number of women along the way—with guests roles from Kristin Scott Thomas and Fiona Shaw—who give her advice on how to live.

Olivia Colman, who is now an Oscar winner, reprises her role as Fleabag’s godmother and stepmother-to-be. Colman is wonderful as always, but her interactions with Fleabag mostly serve as comic relief. The most important relationship in the series, besides the one that Fleabag has with herself (and the audience), is with her sister, Claire (Sian Clifford). After not seeing each other for about a year, the sisters reconnect at the beginning of the second season. They develop a supportive relationship and encourage each other to make choices that will make the other person happy. Fleabag illustrates that relationships between sisters, or even two women who are good friends, are usually complex. While last season the sisters fought about Claire’s repulsive husband, Martin (Brett Gelman), this season Fleabag and Claire unite against him.

Viewers crave multiple seasons of a good TV series—who wouldn’t want to watch Waller-Bridge try to figure out her 30s for a little longer? But it’s also nice to watch a story contained in two short seasons, and Waller-Bridge has said she isn’t interested in a third. By the end of Fleabag season 2, Fleabag hasn’t solved all of her problems, and her grief hasn’t magically disappeared. With a bittersweet goodbye to the audience, she simply goes on living.