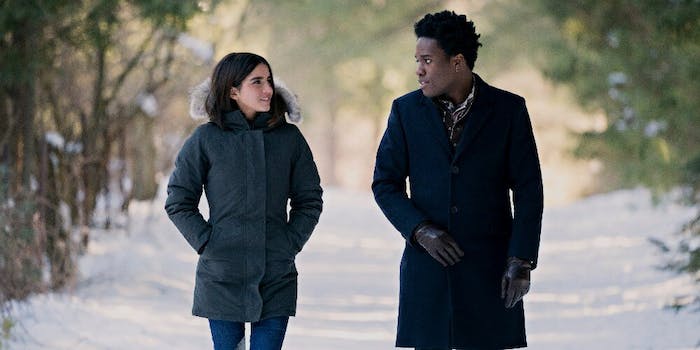 In this John Greene adaptation, the snow is falling and love is in the air in a small town on Christmas Eve.

Netflix’s Let It Snow is dispiriting fluff masquerading as holiday cheer. It doesn’t matter if Let It Snow is a good movie or a bad one. That is beside the point. The sole reason this movie exists is to warm viewers’ hearts and be a source of comfort. However, it’s too trite to deliver anything but eye rolls and frustration. As it works its way through a litany of clichés, Let It Snow occasionally happens across a sincere moment, but, in a way, that just makes the film more frustrating. When a film sets the bar so low for itself and fails to clear it, then I’m just wasting my time.

Based on the novel Let It Snow: Three Holiday Romances by Maureen Johnson, Lauren Myracle, and YA superstar John Green (The Fault in Our Stars), the movie takes place on Christmas Eve in a small town. It’s the kind of small town where you can’t help running into a familiar face wherever you go. There are three main stories that eventually dovetail at the town’s go-to diner, the Waffle Town (I’ll bet a hot cup of cocoa you only need one shot to guess which letter on the diner’s sign doesn’t light up). Each story hits similar notes about friendship, believing in yourself, finding what makes you happy, and young love blossoming.

The most successful of the plotline follows Julie (Isabela Merced). Julie’s mom is sick, and Julie feels obliged to care for her, which would derail her dream of going to Columbia. The bulk of her day is spent with young pop star Stuart (Shameik Moore), where their meet-cute on a train turns into a day of walking and talking through town. Merced and Moore have enough chemistry to keep you interested in the Julie-Stuart relationship. Despite being the most contrived storyline, in a way that kind of helps it. We’re meeting the characters as they’re meeting each other, so there’s some sense of newness there.

The most disappointing storyline goes to Angie (Kiernan Shipka) and Tobin (Mitchell Hope). They’re lifelong friends on the cusp of realizing their true feelings for each other. Otherwise content to slow play things, Tobin is forced into action after Angie is invited to a college party by former classmate JP (Matthew Noszka). There’s a nice wrinkle here, as you’d expect JP to be a jerk, but instead, he’s super nice and inexplicably supportive off Tobin. Let It Snow could’ve had something if it leaned into that dynamic. Instead, it manufactures cheap drama between Angie and Tobin. The jealously Tobin feels and the bitterness with which he expresses it feels absolutely in line with the teenage drama we’ve all lived through.

Let It Snow’s least successful story takes mostly inside the Waffle Town. That’s where Dorrie (Liv Hewson) works and where her crush, Kerry (Anna Akana), comes in with her cheerleader friends. Dorrie keeps trying to talk to Kerry while Kerry isn’t ready to come out of the closet. Dorrie keeps putting Kerry on the spot, and the lack of reciprocation baffles her. While that’s going on, Dorrie’s co-worker, Keon (Jacob Batalon) is desperate to throw a party.

The problem with Let It Snow is that almost every note it hits rings false. It’s set up as a story that wants to be pleasant and take the path of least resistance. So when conflict rears its head, it feels like a misstep. The script, credited to Kay Cannon, Laura Solon, and Victoria Strouse, is disjointed. At times you can feel the patchwork that results from too many cooks. Take the story of Dorrie’s best friend Addie (Odeya Rush). She suspects her boyfriend is about to dump her. She spends most of her screen time trying to get to the diner to confront him. We spend a long time waiting for a confrontation that fizzles out before Jubilee’s story shifts to her friendship with Dorrie. It’s an attempt to salvage a story viewers won’t care about, and that’s how it comes across.

Let It Snow wants everyone to have a good time hanging out with its characters, but none of them are interesting. In a few instances, the cast is able to rise above the script’s limitations. Credit to Moore, Merced, Hewson, Shipka, and Noszka for that. But some of the characters are so thin and poorly written that they can’t be saved. Pour one out for Joan Cusack, who gets the thankless role of the town’s eccentric crotchety old lady, Tin Foil Woman. Yes, she wears a tinfoil hat. Yes, it’s a poor idea that is even more forced in execution. The most amusing thing in Let It Snow is the meta touch of bringing multiple Spider-Man worlds together with the casting of Spider-Verse’s Moore and Far From Home’s Batalon.

As the onslaught of featherweight holiday fare makes its way into theaters, streaming services, and basic cable networks, you’re better off crossing Let It Snow off your to-do list.

Correction: This review has been updated to reflect proper character and actor names.