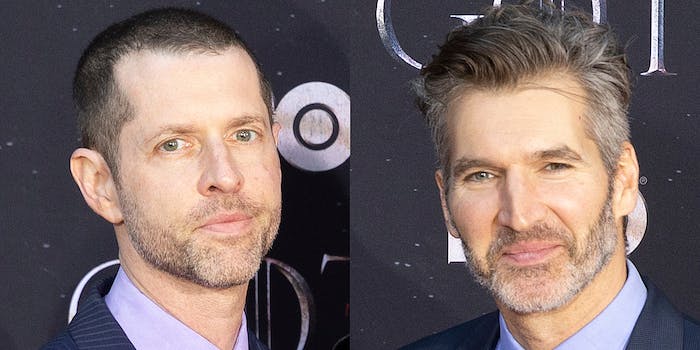 Why people are less than enthused about David Benioff and D.B. Weiss’ Netflix deal

It's not just about 'Game of Thrones.'

After a three-way bidding war between a Hollywood studio and two streaming giants for Game of Thrones showrunners David Benioff and D.B. Weiss’ new projects, the duo is heading to Netflix.

Netflix announced late Wednesday that it signed Benioff and Weiss to an overall TV and film deal, which Deadline described as being in the “9-figure range,” while the Hollywood Reporter says is worth $200 million. Disney (and FX Productions on the TV side) and Amazon—which scooped up Game of Thrones writer-producer Bryan Cogman last year—had also been in the mix, with the latter being a frontrunner up until last month.

David Benioff and D.B. Weiss have signed an overall deal to develop new films and series for Netflix pic.twitter.com/57gLQOSTLE

“We’ve had a beautiful run with HBO for more than a decade and we’re grateful to everyone there for always making us feel at home,” Benioff and Weiss said in a joint statement. “Over the past few months we’ve spent many hours talking to Cindy Holland and Peter Friedlander, as well as Ted Sarandos and Scott Stuber. We remember the same shots from the same ’80s movies; we love the same books; we’re excited about the same storytelling possibilities. Netflix has built something astounding and unprecedented, and we’re honored they invited us to join them.”

Benioff and Weiss’ Netflix deal is in a similar vein to the ones that Ryan Murphy, Shonda Rhimes, and Kenya Barris all received from Netflix in that the streaming service is investing in the creative rather than any specific ideas they might have in mind.

“We are thrilled to welcome master storytellers David Benioff and Dan Weiss to Netflix,” Netflix chief content officer Ted Sarandos said in a statement. “They are a creative force and have delighted audiences worldwide with their epic storytelling. We can’t wait to see what their imaginations will bring to our members.”

It’s unclear exactly when we’ll see anything from Benioff and Weiss; they are still writing a Star Wars trilogy for Lucasfilm, the first of which will arrive in theaters Dec. 16, 2022. But it doesn’t exactly mean that everyone is clamoring to see what they’ve got up their sleeve.

Although some fans are more than excited to see what Benioff and Weiss do next, the reaction has largely been less than enthused; there’s resignation, annoyance, and anger aplenty. But it goes beyond just not liking how Game of Thrones ended—even though that might be part of it for some detractors.

Benioff and Weiss helped make Game of Thrones a phenomenon. Regardless of whether they deserved it, they became its villains

Before they pitched Game of Thrones to HBO more than a decade ago, Benioff and Weiss famously received George R.R. Martin’s blessing to adapt A Song of Ice and Fire, a series that Martin once called “unfilmable,” during a lunch meeting that went long enough to turn into dinner. Before giving his blessing, Martin asked Benioff and Weiss—who were fans of ASOIAF—a question: Who was Jon Snow’s mother? They got it right. (Game of Thrones later revealed that Jon Snow’s mother was Lyanna Stark.)

It’s a story they’ve told many times, most recently on Jimmy Kimmel Live in early May; it was one of their final interviews before essentially going radio silent after the series finale aired on May 19.

It’s also an early indication of the trust that Martin, who would eventually write four Game of Thrones episodes himself, had in Benioff and Weiss’ vision for his story. And when it became evident that Game of Thrones would surpass what Martin had written of ASOIAF, he met with Benioff, Weiss, and Cogman (who Martin recently described as “the third head of the dragon”) to break down how he planned to end ASOIAF.

In execution, however? It’s a little more complicated than that, although there is no doubt that Game of Thrones became more popular and successful than anyone could’ve ever imagined.

The first four seasons, which were largely praised by critics, were what we think of as an adaptation of ASOIAF. The latter four seasons took more liberties, compressed stories together, and eventually went completely off-book once Benioff and Weiss surpassed what Martin had published.

Even if its sheer popularity essentially made Game of Thrones critic-proof, criticisms still followed–including how Game of Thrones depicted its female characters and gender violence as well as the lack of women and people of color writing and directing episodes. In later seasons, the increased pacing and abandonment of any kind of travel logic that were results of a shortened final two seasons—restrictions seemingly set by nobody other than Benioff and Weiss—and the execution of certain subplots. (The less said about Dorne, the better.) And, major set leaks started becoming more prominent, Benioff and Weiss criticized fans who sought out Game of Thrones spoilers, driving something of a wedge between creators and fans.

It all came to a head in a final season that would have been divisive no matter what happened but ended with Jon Snow killing Daenerys Targaryen after a rushed downfall–which never felt organic to many viewers–and Bran Stark ruling all of Westeros.

Those who disliked or outright hated how Game of Thrones ended have largely laid the blame for the final season and the series finale at the feet of Benioff and Weiss, who both wrote and directed the episode. Others analyzed what the cast have said about the final season to support their own stance on it; several cast members later defended Benioff and Weiss at conventions. Martin even complained about fandom toxicity during a podcast recording.

And if you thought time would’ve helped heal that wound, just watch what happens every time they make headlines, whether it’s about their Emmy-nominated script, dropping out of San Diego Comic-Con (where Seth Rogen openly mocked them for not showing up to the Game of Thrones panel), or even this Netflix news. For months—and maybe years—to come, people will judge whatever Benioff and Weiss do against how well they do it.

The sparse, non-Game of Thrones resumes of Benioff and Weiss

If you look at what Benioff and Weiss have done outside of Game of Thrones, you won’t find much—literally.

Weiss–whose novel Lucky Wander Boy was published in 2003–got his first TV writing credit with Game of Thrones while Benioff wrote several screenplays, including 25th Hour (which was based on the novel he wrote), Troy, and X-Men Origins: Wolverine; he’s also the author of three books. Benioff and Weiss co-wrote a season 9 episode of It’s Always Sunny in Philadelphia that aired in 2013.

Before Game of Thrones ended, HBO greenlit Confederate, Benioff and Weiss’ alt-history series where the Confederacy won the Civil War that immediately garnered backlash, and they signed on to write a Star Wars trilogy that won’t materialize into anything for another three years. (If there is a silver lining to the Netflix news, it’s that Confederate is finally dead.) In comparison, Murphy, Rhimes, and Barris all had multiple series under their belts before being offered their own nine-figure creator deals at Netflix.

Game of Thrones was a massive success–having worked on the series for a decade, written a vast part of it, and been hands-on in other regards–there’s no question that Benioff and Weiss were an aspect of that success, even though their otherwise lack of experience still stands out. What we don’t know is what a Benioff and Weiss TV endeavor looks like outside of Game of Thrones because well, we haven’t seen it yet. Thanks to Netflix, we eventually will.

It might make sense from a business perspective for Netflix to spend nine figures nabbing the Game of Thrones showrunners, it can still feel like a slap to the face, especially when compared to other creators who’ve struggled to get their own shows on the air—and then keep them there.

Netflix’s announcement that it nabbed Benioff and Weiss for an overall deal arrived Wednesday. Just two days earlier, it canceled The OA, the latest casualty in a series of Netflix TV shows that are only given a season or two (occasionally three) to flounder with very little support before being unceremoniously canceled.

A couple of weeks before that, Netflix canceled the critically acclaimed Tuca and Bertie, only to give Big Mouth a three-season renewal two days later.

That’s not to say that these events are related. Negotiations, especially for major creator deals or multiple seasons of television, take time, effort, and money. Chances are, some of these deals might have been largely done well before the cancelations became official.

But what tends to rub a lot of people the wrong way, whenever the juxtaposition of canceling a unique show with a larger deal occurs, is the optics of it all: Couldn’t Netflix have waited a bit longer before making those announcements? But even if Netflix did, there would still be a good chance of making it look like a big deal came at the expense of other creators.

Netflix is greenlighting, producing, and debuting original series left and right. It enticed creators, producers, and A-list stars to work there; it even has a partnership with Barack and Michelle Obama. It spent $100 million to keep the streaming rights to Friends for a year. Netflix is still losing money, and for the first time, it also lost subscribers. And that’s before looping in the competition from Amazon, Hulu, Apple, and the many, many networks with their own streaming services readily available or set to launch soon. By the time Benioff and Weiss debut their first big project, they’ll be doing so in a much more crowded field than they exited when Game of Thrones finished as the most popular TV show in the world.

Chances of that investment being worth it aren’t a guarantee, but it’s still possible; the entertainment world will almost certainly be curious as to what they will cook up next. But even if Benioff and Weiss’ Netflix ventures are massive hits, it’s just as easy to wonder what could have been if Netflix had instead invested its money in creators who wouldn’t otherwise get a chance.