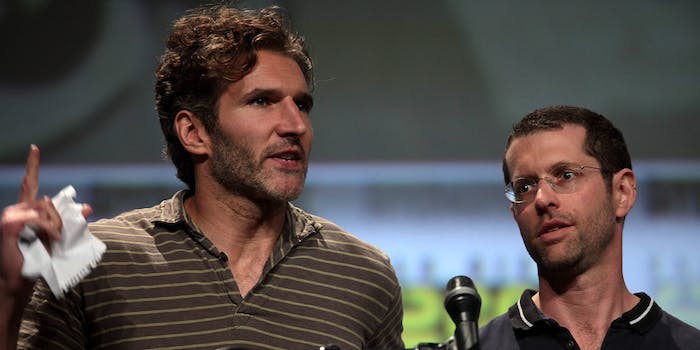 They were scheduled for a panel at SDCC headline stage in Hall H.

Game of Thrones creators David Benioff and D.B. Weiss have canceled their trip to San Diego Comic-Con, surprising fans who expected to see them at the convention.

Comic-Con begins today and the showrunners dropped out on Wednesday, so this is a very last-minute cancellation. While most major panels at Comic-Con are there to promote upcoming projects, Game of Thrones is scheduled for an epic post-mortem panel at the headline stage in Hall H. On Friday evening several of the show’s lead actors will take to the stage, but Benioff and Weiss won’t be with them, meaning fans won’t get a chance to ask any burning questions about the show’s writing choices.

Actors Ian Glen and Nathalie Emmanuel have also dropped out, along with director Miguel Sapochnik.

HBO’s announcement on Wednesday gave no reason for the cancellation, although people are obviously speculating that Benioff and Weiss want to avoid facing uncomfortable questions or backlash about the show’s ending. However, an HBO representative told io9 that it’s a “production and scheduling issue.” The two writers’ current project is a new series of Star Wars films tentatively expected to start in 2022, with an original HBO show called Confederate announced in 2017, but rumored to be on hold. A separate Game of Thrones prequel series is currently filming with Naomi Watts in the lead role, so it’s possible they’re consulting on that.

Or maybe they just decided they didn’t want to go to Comic-Con, which is fair enough when your show just got nominated for 32 Emmys, and you’re no longer obliged to promote it.