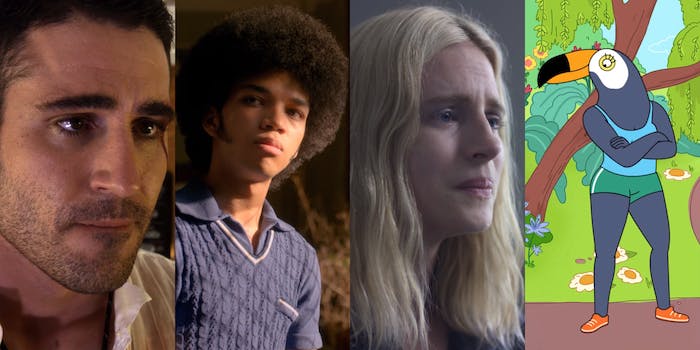 Your favorite Netflix show will soon be canceled

Do you love a unique, original Netflix show with a diverse cast? Well, don't get used to it.

Recently you fell in love with a Netflix show. Maybe it was weird and original, like American Vandal, or featured an unusually diverse cast, like The Get Down or Sense8. Perhaps it was an artistically ambitious project from a female showrunner, like The OA or Tuca & Bertie. Whatever it was, your new favorite show felt fresh and exciting, yet oddly under-recognized. And after two seasons, it almost certainly got canceled.

After greenlighting a ton of original programming, Netflix has embarked on a cancellation spree, and you can’t avoid noticing what type of shows get the chop. Obviously, the big hits like Stranger Things are safe, but while traditional dramas like Ozark (a crime show with a white male protagonist) get renewed, the more racially diverse and creatively offbeat shows are dropping like flies. This wouldn’t be surprising for network TV, but Netflix spent the past few years cultivating a reputation for promoting marginalized creators.

In the midst of contentious public debates about representation and discrimination in Hollywood, Netflix felt like a safe haven. Avoiding the stuffy, corporate image of CBS or NBC, Netflix used Twitter accounts like Strong Black Lead and Netflix Canada (tweeting from the persona of two “gay interns”) to promote a friendly, progressive brand. Netflix greenlit the Wachowskis’ ambitious, extremely queer TV series Sense8. Netflix was the home of One Day at a Time, a beloved sitcom about a Cuban-American family. Netflix champions whatever project Ava DuVernay wants to make. But most creators are not Ava DuVernay.

In the past year, Netflix canceled Sense8, American Vandal, The Get Down, The OA, Tuca & Bertie, Chambers, Trinkets, and She’s Gotta Have It after one or two seasons—a clear trend of shows created by and/or starring women and people of color. (One Day at a Time was canceled after three, and picked up by Pop TV following an energetic fan campaign.) The implication is that if you want to make something original on Netflix, then you need to prepare for a swift turnaround. Yesterday, writer/producer John Rogers (Leverage) posted this reminder on Twitter: “You are now in the mini-series business.”

re: Netflix and other news. This card has been on my board as a reminder for weeks now. Get there in your head. pic.twitter.com/gjMDMbfJNL

It’s easy to find Netflix’s cancelation process frustratingly opaque. Netflix doesn’t release viewership data about its shows, so we just have to take the company’s word for it when it says a show is popular or not. Also, Netflix’s financial situation is wildly out-of-sync with, say, HBO’s. As a business that functions more like a Silicon Valley tech company than a TV network, Netflix relies on investor funding rather than revenue from ads or subscriptions. Like Uber, it runs at a loss. In fact, Netflix is currently $12.3 billion in debt. The overall strategy is to get as many subscribers as possible, which means casting the net wide with a range of programming including A-list actors and filmmakers, international content, and niche projects with a cult following.

Shows like Sense8 and The Get Down may have attracted new audiences at first (or solidified Netflix’s image as an inclusive platform), but after one or two seasons, they’d done their job. They were also very expensive. With pressure to avoid overspending, Netflix canceled them in favor of new big-budget genre shows like The Witcher and Cowboy Bebop. There’s also a secondary, more inside-baseball reason for this two-season limit. After two seasons, writers and producers are entitled to a pay bump, as explained in this Deadline article:

“Netflix’s deals include bump/bonuses after each season that are getting progressively bigger. While the payments are relatively modest after Season 1 and a little bigger after Season 2, I hear they escalate after Season 3, especially for series owned by Netflix—sometimes from hundreds of thousands to millions of dollars—as the studio starts to pay off the shows’ back-end.”

While Netflix is happy to greenlight a few unusual projects, they’re less likely to renew after two seasons, because they’d suddenly have to pay the creators much more. A show really has to be seen as a good investment to continue beyond that. So far, that list consists of old-school sitcoms like Grace and Frankie, and mainstream hits with a big promotional push behind them, like Stranger Things, House of Cards, Orange is the New Black, and The Crown.

Following the cancelation of Tuca & Bertie and The OA, many fans complained that Netflix didn’t promote these shows enough. The OA’s second season arrived with minimal fanfare, with some people missing it even though they watched and enjoyed season 1. Similarly, One Day at a Time inspired massive word-of-mouth support, but received no funding for an Emmy campaign, despite universally glowing reviews. There’s a definite sense that Netflix will give diverse, original shows a better chance than network TV, but it’s still “a chance” rather than the extensive promotional support given to something like House of Cards. As a Netflix user, you can’t log onto the site without seeing recommendations for Stranger Things, but even if you’re in the target audience, you could easily miss that The OA even exists.

The recent spate of cancelations puts things into perspective, reminding us that Netflix isn’t a faultless paragon of original programming. Like any other media company, Netflix prioritizes content with famous actors and reliable formats over offbeat projects and non-white, non-straight audiences. Over the next few years, we’ll see how this impacts creators, who may start tailoring their work to a two-season limit. As for the viewers: Get used to the idea that your favorite show will get canceled before season 3.