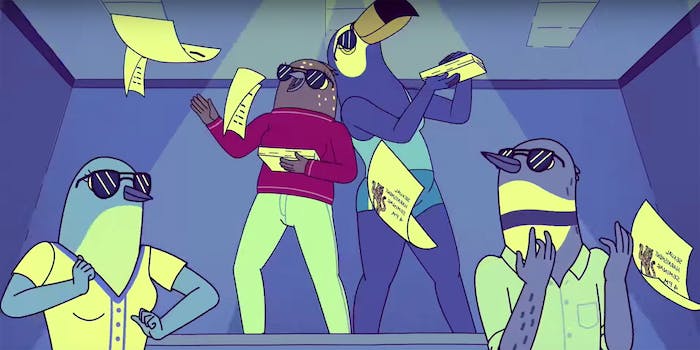 Is Netflix setting up marginalized creators to fail?

'Tuca & Bertie' is just the tip of the iceberg.

Viewers have argued that Netflix prematurely ends quality shows for years. But following the cancellation of Lisa Hanawalt’s Tuca & Bertie in spite of critical acclaim, people are pointing out patterns in what and who gets renewed.

Netflix announced Wednesday that it would not be renewing the animated comedy series Tuca & Bertie, greatly surprising and disappointing fans. After all, the show has 100% on Rotten Tomatoes and has been on Netflix for less than three months. Why would the streaming giant cancel a show so highly regarded after giving it so little time to build an audience?

The public may never know definitively what caused Netflix to pull the trigger on the fledgling series (the streaming service did not immediately respond to the Daily Dot’s request for comment). But viewers and industry folks have some ideas. “I have worked in animation for three years and already I’m so very tired of men getting blank checks to make, do, and say whatever they want, and women having to prove themselves over and over and still losing,” wrote cartoonist and animator Molly Ostertag on Twitter with #RenewTucaandBertie.

Hanawalt celebrated the achievement of the cast and crew behind Tuca & Bertie on Twitter and noted that it has “repeatedly been called one of the best new shows of the year.” She thanked all the fans who send her art and messages every day. Then she concluded, “None of this makes a difference to an algorithm, but it’s important to me.”

Though Hanawalt didn’t explicitly say it was Netflix’s algorithm at fault, that is what many viewers believe. Netflix’s Jarett Wieselman tried to engage with the criticism on Twitter. “When a Netflix show gets canceled, ‘you didn’t promote the show’ is something we (yes I work @ Netflix) hear a lot. But what does that mean to you?” Wieselman asked.

People had a lot of ideas. One writer noted that even though she’d watched all of Bojack Horseman, which Hanawalt produced, she was never shown an ad for Tuca & Bertie on Netflix. Viewers chimed in with examples of Netflix originals they actually watch being buried beneath promoted titles they have no interest in.

Netflix berates me with shows I have explicitly told it I'm not interested in & hides other shows behind several levels of "this specific cross-genre category" a lot. I often feel like I'm logging onto a service that is carefully crafted for a specific viewer that is NOT me.

Make the same communication effort you make for promote top of mind productions from your catalog. Series like She Gotta Have It or The Get Down wouldn't be unknown to the public if you made the same effort that you made to publicize things like 13 reasons why.

It’s not just viewers who are getting frustrated by this; it’s the creators Netflix hires, as well. Writers, hosts, and comedians shared stories of how their new work for Netflix isn’t being promoted, even when viewers are watching other things they’ve worked on. Some shared fears that the things they’re making for Netflix now will meet the same fate as Tuca & Bertie.

I'm co-creator of a @Netflix original, #theDragonPrince, previously headwriter of #AvatartheLastAirbender . If you liked ATLA, you might like TDP — but I meet SO MANY people who tell me they love Avatar, they have Netflix, and they have never heard of The Dragon Prince.

Co-sign for MST3k. There was nothing mentioned by the official Netflix twitter account. Fans even had a hard time finding it.

Tuca & Bertie (just as an example) was never pushed to my email, never shown to me on the Netflix home page. I had to search for it. This was just a day or two after its release. I had only heard of it from friends. I don't want this to happen to Battle Kitty (the show I work on)

Over the complaints from all these people, a pattern starts to emerge: Netflix appears to put a lot of effort into promoting a small number of its original shows but next to none for most of them. New shows and creators are lucky to get a single tweet from Netflix’s official Twitter for promotion. But shows like Stranger Things, 13 Reasons Why, and stand-up specials are given marketing campaigns, a space on every users’ home screen, and auto-playing previews, regardless of the viewers’ feedback.

If you’re using an algorithm to find out what I like, it’s not very good at it. I am constantly advertised comedy specials by old white men and Aziz Ansari, both of which I find GENUINELY OFFENSIVE, but I have no way of indicating that I NEVER WANT TO SEE THAT TRAILER AGAIN.

For many who are just now discovering Tuca & Bertie after its cancellation, it’s a mystery why it was hidden. Why weren’t fans of Bojack Horseman recommended this show? Why weren’t fans of adult animation recommended this show? Why did it not appear in the New Releases bar? Why did Netflix not tweet about its premiere, nor do any Twitter promotion beyond announcing it in 2018? Every obvious avenue of promotion appears to have been ignored, leaving its discovery to word of mouth. It’s hard to build an audience that way in 11 weeks. Some argued that it feels as if the show was set up to fail.

Many of the replies to Wieselman highlighted other shows that met the same fate. Spike Lee’s She Gotta Have It was canceled less than two months after the second season came out, and the award-winning sci-fi series from the Wachowski sisters, Sense8, which was canceled on a cliffhanger a month after the second season aired. There’s something a lot of these highly acclaimed but short-lived shows have in common: Marginalized people are in charge.

And Netflix owns these stories now. It effectively silenced these narratives before their true end, leaving viewers who were so excited to see themselves represented instead feeling betrayed and heartbroken. Sense8 got a finale after fans’ outcry, but that’s not the case with other canceled shows.

Tuca & Bertie was beloved by fans and critics alike, and is rapidly gaining more fans as it’s cancellation was better communicated by Netflix than its premier. The problem isn’t the show. The problem is Netflix.