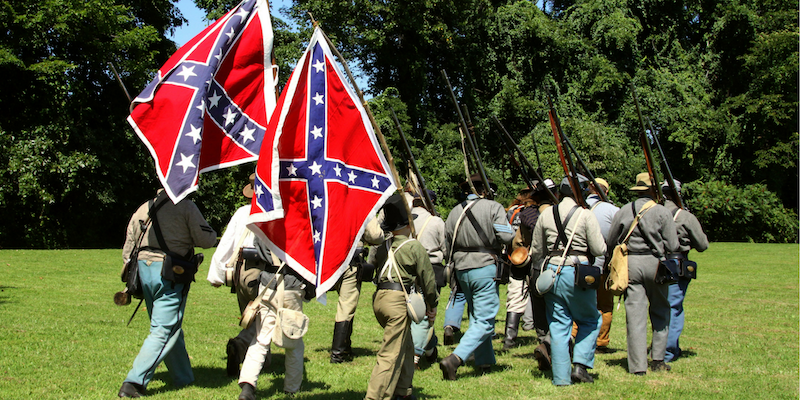 David Benioff and D.B. Weiss, the showrunners of Game of Thrones, knew they were dealing with a sensitive subject when forming the premise for their recently announced HBO series Confederate, an alternate-history drama that reimagines the United States if the South had won the Civil War.

Or, as Confederate co-producer and writer Malcolm Spellman put it, they’re “dealing with weapons-grade material here.”

In an interview with Vulture, Weiss, Benioff, Spellman, and fellow co-producer and writer Nichelle Tramble Spellman addressed the overwhelming backlash that followed the team’s announcement. Primarily, critics took issue with the show’s pitch of “modern day slavery” in a U.S. where the South successfully seceded from the Union.

Benioff explained that the premise of the series was ignited from his and Weiss’ status as “history nerds” and a specific Civil War battle he’d read about. Before the Battle of Antietam, Union troops discovered Confederate General Robert E. Lee’s “Lost Orders,” the significance of which is still debated today. However, History.com asserts that the intercepting Union general was too slow to use the orders to significantly squander Lee’s troops and Benioff said many have questioned if it hadn’t been for Lee’s lost orders, if the South would have won the battle and sacked Washington, D.C., thus leading to his idea of this alternate history.

“It goes without saying slavery is the worst thing that ever happened in American history. It’s our original sin as a nation. And history doesn’t disappear. That sin is still with us in many ways,” Weiss told Vulture. “Confederate, in all of our minds, will be an alternative history show. It’s a science-fiction show. One of the strengths of science fiction is that it can show us how this history is still with us in a way no strictly realistic drama ever could, whether it were a historical drama or a contemporary drama.”

Despite assertions that Nichelle and Malcolm, who are black, were only brought onto the show as pawns to justify the show’s legitimacy, Benioff clarified that all four of their team have equal say in the production of the series. Malcolm also refuted the theory, saying that he and his wife Nichelle weren’t “props” being used to protect the show or others.

“…People don’t have to get on board with what we’re doing based on a press release. But when they’re writing about us, and commenting about us, they should be mindful of the fact that there are no sell-outs involved in this show,” Malcolm said. “Me and Nichelle are not props being used to protect someone else. We are people who feel a need to address issues the same way they do, and they should at least humanize the other end of those tweets and articles.”

Nichelle told Vulture that she understands the concerns voiced by other black writers. However, she wishes such criticisms could have been held for the unveiling of the show, for their actual hour-long product, instead of for a concept that the team hasn’t begun creating characters for.