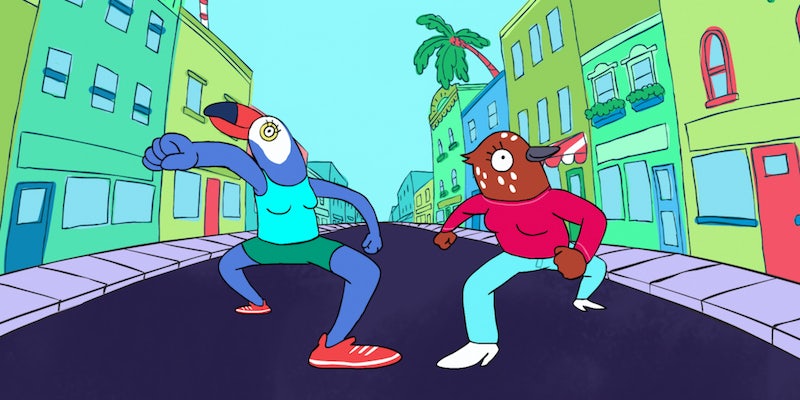 The cancelation of ‘Tuca & Bertie’ is a major loss for Netflix

Fans are not OK with the cancelation of one of Netflix's truly unique shows.

On Wednesday, Netflix announced it canceled two more of its series, Tuca & Bertie and Designated Survivor.

Tuca & Bertie, an original animated series, and Designated Survivor, which Netflix picked up from ABC for a third season, have both been axed, but Netflix didn’t give a reason for either cancelation. It just offered up gushing thank-yous to the shows’ crews in a statement. The Tuca & Bertie announcement, in particular, is a real loss for Netflix.

The series, which only debuted in May, has a woman showrunner (BoJack Horseman‘s Lisa Hanawalt) and explores the lives of two bird women (played by comedians Ali Wong and Tiffany Haddish) as they deal with addiction, harassment, equality, sexuality, work, and friendship. Hanawalt posted about the cancelation on Twitter and said she hopes “we can find a home for Tuca & Bertie to continue their adventures.” She added that “I still get daily messages and tweets from viewers who connect personally to the characters and stories.”

Best of all, I still get daily messages and tweets from viewers who connect personally to the characters and stories. The birdsona & plantsona fan art is SO incredible, are you kidding me! And the show is still being discovered by new fans every day!!

Thank you to everyone who loves and supports T&B, and to everyone who was comforted and felt like this show gave you a voice. I’m hopeful we can find a home for Tuca & Bertie to continue their adventures. #TucaandBertie pic.twitter.com/xmrAV7Ooyq

Tuca & Bertie fans expressed similar frustrations but also commented on how much they loved the show and related to its fearless, honest depiction of adult women. And it wasn’t just women who loved the show.

TUCA AND BERTIE was critically acclaimed enough, and cheap enough, that a deep-pocketed streaming service should've renewed for the optics alone. especially one that loves to brag about representation as much as netflix!

No lie, I’m really pissed @netflix decided to cancel Tuca & Bertie. Yet we gotta wade through all these shows about mediocre sad boys and unfunny comedy specials. pic.twitter.com/yR1kIUMzxP

how the fuck can paradise pd, big mouth, disenchantment, and f is for family get renewed for multiple seasons while tuca and bertie apparently can't

The hashtag #RenewTucaAndBertie has started circulating but this is yet another example of Netflix’s wild contradictions: They’re throwing an alleged $70 million at Eddie Murphy for a comedy special that seems to be validated on name alone. It inexplicably keeps giving Jerry Seinfeld seasons of Comedians in Cars Getting Coffee, one of the most boring shows in recent memory. Limping franchises like Arrested Development continue to get life support. Last summer’s from-fat-to-hot disaster Insatiable was roundly panned by critics, but Netflix wasted no time renewing it. And yet shows like One Day at a Time, which has a massive fanbase and actually connects with people, get tossed.

It seems Netflix isn’t listening to its shows’ fans, and that’s going to be even more important when it starts losing more non-original series. It’s already started losing subscribers.