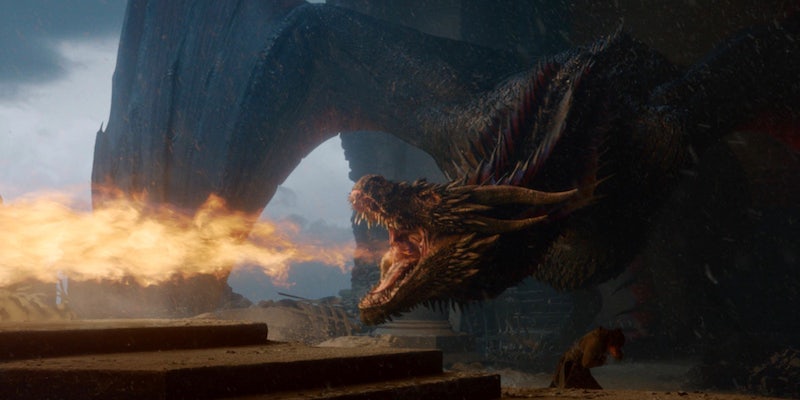 There is a lot to analyze—and scrutinize.

If anyone thought that two-and-a-half months was long enough for us to litigate the end of Game of Thrones, the emergence of the series finale script online this week is bringing a lot of those feelings right back to the surface.

The script for “The Iron Throne,” written by Game of Thrones creators David Benioff and D.B. Weiss, is now available on the Emmys website, along with every other script nominated for writing Emmys this year. The scripts are a source for Emmy voters, who can peruse the script before choosing which episodes should win their respective Emmys, but the scripts are also available for public consumption or—at least in Game of Thrones’ case—scrutiny.

At 45 pages, the script is full of dialogue and fascinating descriptions for scenes and characters. Based on what we’ve seen and read about some of the show’s other scripts, it’s par for the course. But that hasn’t stopped fans and critics alike from picking it apart, both for new information or to make fun of what’s contained within. (For instance, a throwaway line about how Jon and Sansa “both failed geography” when they’re confused about Arya’s question of what’s west of Westeros, is getting a lot of play.)

Scripts aren’t written for us, to be fair. They can contain inside jokes, asides meant to make the cast and crew laugh, or shorthand descriptions for scenes that they might be able to better convey to the actors and people involved in-person. (Having also directed the series finale, Benioff and Weiss could’ve potentially provided that information and context to actors on-set if need be.)

But going through the script likely isn’t going to change your mind about how you feel about the Game of Thrones series finale; it’ll probably work as its own kind of Rorshach test and reaffirm that viewpoint. If you loved the finale, you might find plenty to love about the script. If you hated the episode, chances are you’ll hate the script even more. If you felt mixed about it, you’ll find a bit of both in there. The new insights contained within the script are ripe for analyzation and mockery, depending on how they read to you.

Early on, “The Iron Throne” sets the scene of how horrific Dany’s attack on King’s Landing was as Tyrion Lannister and Jon Snow saw the result of that destruction.

An initial description of Tyrion walking through the wreckage of King’s Landing references the opening sequence of Son of Saul, a 2015 Hungarian film that features a Jewish man at Auschwitz-Birkenau who’s made to assist in exterminating Jews who were brought there. It also includes references to “the negative image of the Hiroshima silhouettes” when describing the human-shaped silhouettes left behind by burned bodies, as well as describing “People baked in their brick home as if in an oven.”

And the widely mocked shot of Drogon appearing behind Dany as if to make it look like she was a dragon herself was right there in the script, an image projected at “Her Satanic Majesty’s request.”

The scene, as shown, was heavy-handed, for sure. It was also exactly what they wanted.

The script puts a wrench into a certain fan theory/meme

As the script states, it’s closer to the former theory, at least in part. Drogon never meant to kill Jon, but he never meant to purposely destroy the Iron Throne, either.

“Who will sit on the Iron Throne?” the script asks. “No one.”

Benioff and Weiss describe the Iron Throne as “just a dumb bystander caught up in the conflagration” of Drogon’s flames, which makes the destruction of Westeros’ long-standing symbol of power and corruption a mere accident. On one hand, it’s indicative of the sometimes random circumstances that shape Westeros.

But on the other, what’s intended in the script doesn’t always translate on-screen, so while technically it kills the Intellectual Drogon meme, it still works as an interpretation of that scene. And if you believe in Death of the Author, what Benioff and Weiss intended in that scene doesn’t matter at all.

Despite having spent almost the entirety of the series apart, Game of Thrones always managed to convey the closeness between Jon and Arya, two siblings who always felt out of sorts in Winterfell (Jon for being a bastard, Arya for not wanting to live the life of a traditional lady). And when it’s time for them to say goodbye after Jon’s exiled to the Wall, it’s their farewell that’s the most heart-wrenching.

Once again, Jon checked with Arya about whether she still had Needle, the sword that Jon had made for her before he left for the Wall in season 1.

“Wherever you go, I’m right there beside you,” Jon says in the script.

The heartwrenching line is ultimately left unsaid, but its absence doesn’t hinder the scene; their connection is forged enough that it doesn’t need to be.

Ghost was always going to get the pets he deserved

Ghost was the best boy of Westeros (aside from Drogon), and his reunion with Jon at the end of “The Iron Throne” delighted fans. But after the backlash over the coldness of their farewell in “The Last of the Starks,” some suspected that Game of Thrones put the scene in at the last minute to appease fans.

Granted, that’s not how making TV works, and as it’s been noted before, direwolves have long proved to be a tricky commodity for Game of Thrones to nail down. But as the script shows us, Ghost was always meant to be there, even if the script’s reaction to the Jon and Ghost reunion isn’t as enthusiastic as ours was online.

There was at least one completely intentional callback in the script

Game of Thrones loves its Easter eggs and callbacks, and after each episode, fans would search far and wide for what connections it made to previous episodes. Jon’s inquiry over Needle is one such instance, but if the show’s final scene made you recall the Game of Thrones cold open from the pilot, that’s because Benioff and Weiss wanted it to.

They reference that cold open—where three members of the Night’s Watch head Beyond the Wall on horseback—twice: first when Jon and Tormund Giantsbane in the tunnel, watching as the gate is raised to let them through, and again as they walk through it.

“Things still look very similar to the pilot shots, except Ghost is with them,” the script states.

As Jon and Tormund leave Westeros behind, the show comes full circle. And no matter how divisive the script will likely prove with everyone reading it online, will the script translate with Emmy voters who know what to look for in a good script? That’s something we’ll find out when the Primetime Emmy Awards air on Sept. 22.