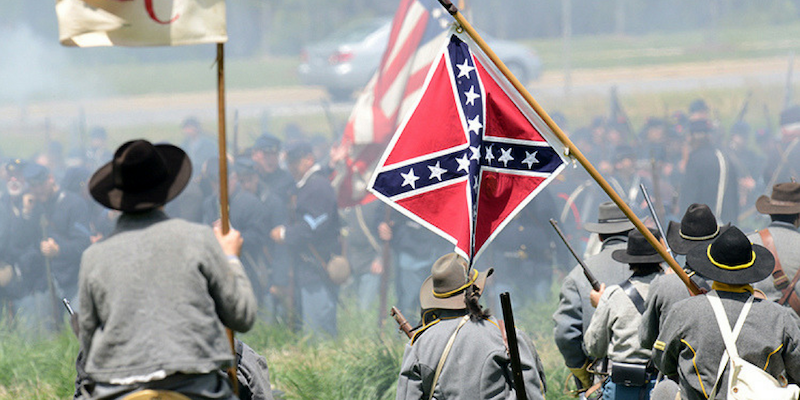 'Confederate' is the revisionist Civil War series coming from 'Game of Thrones' showrunners.

On Wednesday, HBO announced that the Game of Thrones creators and showrunners would be returning to the network following the series finale.

While the news might have excited fans of the series, the new project, based in an alternate timeline in which modern-day slavery is practiced under a successfully succeeded Confederacy, received less-then-positive reactions.

According to HBO’s press release, the series, titled Confederate, follows events leading up to the “Third American Civil War” and include “freedom fighters, slave hunters, politicians, abolitionists, journalists, the executives of a slave-holding conglomerate and the families of people in their thrall” as they, you know, navigate the politics of modernized slavery.

The comments on HBO’s Medium post, while few, all resonate a literal, “don’t do this,” echoing the general reaction from other internet critics. Many completely disagreed with the network re-imagining a world in which the South fulfilled on their promise to “rise again,” particularly at a moment in the United States when discussions involving race and reparations still devolve to retorts like, “Go back to Africa.”

#Confederate is a neonazi wet dream. It's a repulsive premise of a show literally designed by rich white men to profit from white supremacy.

— Crystal Fleming is not endorsing any candidates (@alwaystheself) July 20, 2017

Black people in the USA right now don't have to spin an alt-history "what if" to consider the impact of institutional racism on their lives.

Hey @HBO, Confederate would be much more dynamic if the alternate timeline explored an America that doesn't exploit black pain for a change.

No thanks, HBO. If I want to see an alternate reality where the South won the Civil War I'll attend a Trump rally where people think it did.

Some used HBO’s announcement to pitch their own series “involving” slavery.

HBO pitch: America but if slavery had never happened.

Hey @HBO, I'm writing a script abt an alternate timeline where the South loses the war and slave owners & their descendants are enslaved.

Others, like writer Nicole Silverberg, shared their thoughts on how they anticipate the slavery-rooted series to play out: two hot white guys ignoring the realities of the prison industrial complex while trying to explain how slavery is all about economics.

wow, the first page of HBO's Confederate has leaked!!!!!!! excited to share it with you all!! pic.twitter.com/FIaY9wa3KK

Some, however, pushed for HBO to drop the slavery revisionism and pick up Underground instead, a critically-acclaimed WGN America series about the Underground Railroad that was canceled after two seasons.

If HBO wants a series about the Civil War so bad, here's an idea – PICK UP UNDERGROUND.

HBO should've just paid to pick up #Underground and called it a day. pic.twitter.com/gAKu6HltzU

HBO didn't wanna pick up Underground, but Confederate sounded like the next best thing. Ok

Seriously HBO, you could have just picked up Underground.

Perhaps the Game of Thrones team will take some of this criticism to heart before beginning production begins.

The Daily Dot has reached out to a representative from HBO for comment.