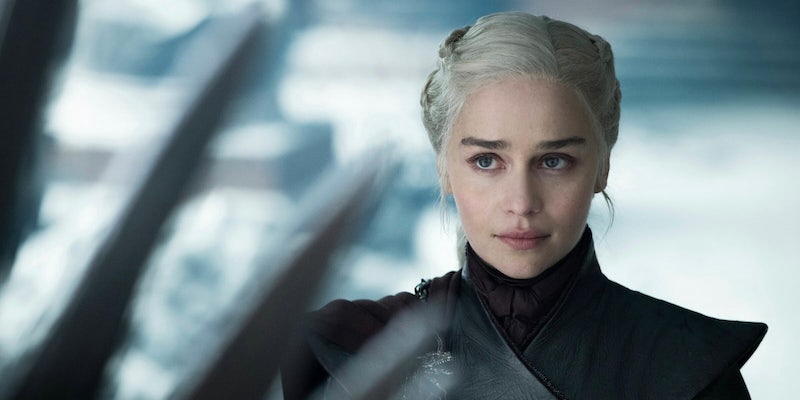 The series limped to the finish line with blind spots and avoidable shortcomings.

Game of Thrones ended its monumental eight-year run Sunday night on a historic high: According to HBO, a record 19.3 million people watched the series finale across its platforms. Whether you loved or hated how the show ended (or how it eventually got there), many of viewers who first sat down to watch Game of Thrones when it premiered in 2011 couldn’t have imagined that not only did the show finish telling its story, but also turn into a worldwide phenomenon. (George R.R. Martin famously called A Song of Ice and Fire, his fantasy series on which Game of Thrones is based, “unfilmable.”)

But the end of the series leaves us with questions even outside the ones dealing with plot and character. What lessons can future storytellers learn from Game of Thrones? What networks and streaming services will try to entice the sizable Game of Thrones viewing audiences with their own dazzling fantasy epics, many of which might end up being pale imitations? What can TV do to further the technological feats Game of Thrones had on display? Will this truly be the last traditional watercooler series? And what do the futures of the people who painstakingly crafted it, which includes showrunners David Benioff and D.B. Weiss and writer-executive producer Bryan Cogman, who got snatched up by Amazon after wrapping up on Game of Thrones, look like outside of Westeros?

Over the coming weeks, months, and years, fans, critics, and TV execs will be looking back on what Game of Thrones brought to the table. But as much as future shows will want to emulate Game of Thrones’ successes, I hope that one aspect of it stays behind for those inevitable knock-offs.

The elephants in the room

Game of Thrones was largely written and directed by men. It’s right there in the credits just as soon as the enchanting title sequence wraps up.

Of the 73 episodes that Game of Thrones released, only two women—Jane Espenson (a teleplay credit on “A Golden Crown”) and Vanessa Taylor (three episodes in seasons 2 and 3)—are given writing credits. (Gursimram Sandhu is credited as a staff writer on five episodes of Game of Thrones season 8, and she wasn’t listed as the writer of any of those episodes.)

Out of the 19 directors who’ve worked on those 73 episodes, only one woman has ever directed: Michelle MacLaren (four episodes in seasons 3 and 4).

As Game of Thrones season 8 played out, the makeup of the show’s writers and directors came up again and again as critics highlighted how several female characters on the show were portrayed; I’ve lost track of how much I’ve personally mentioned it, feeling like a broken record player each time I have. It became a scathing series finale meme featuring Brienne of Tarth finishing Jaime Lannister’s entry in the White Book.

How those perspectives might trickle down to its characters

If there is one unified criticism of Game of Thrones over the past eight years, it’s how the show has depicted its female characters.

Much of it, from the depictions of violence, rape, and uncomfortable and open displays of misogyny, are all embedded deep within ASOIAF. Martin has long defended including those elements in his story because, outside of the fantasy elements of his story, they’re rooted in reality and not including them ignores that, according to Martin, “the true horrors of human history derive not from orcs and Dark Lords, but from ourselves.”

Whether it was the use of sexposition (pairing nudity with long exposition), the ratio of female to male nudity on the show, or how the rapes of several of its female characters—Sansa Stark, Cersei Lannister, and Daenerys Targaryen among them—were portrayed on-screen, it’s an ongoing problem.

Cogman, who wrote the episode that features Sansa’s rape in season 5, stands by the scene but acknowledged the criticism and conversations it started since then; he recently told Vanity Fair that “I really tried to listen to all the criticism surrounding it and will continue to listen.” When asked by email about that particular episode (“Unbowed, Unbent, Unbroken”) as part of a Rolling Stone profile of Sophie Turner and Maisie Williams, Benioff and Weiss deleted it from the list of questions sent to them.

Although we got numerous flawed and complex female characters throughout all of Game of Thrones’ run, there was something of a shift starting in season 6 (which may have partially been a result of the pushback from Sansa’s rape in season 5); on several 2016 covers, Entertainment Weekly declared that season 6 of Game of Thrones “has the women on top.” Dany, once again in the hands of Dothraki captors, burned them all down. Sansa became the force that won Jon Snow the Battle of the Bastards. Cersei outsmarted several players (including Margaery Tyrell) and set a sept on fire to become queen herself. Season 7 framed a three-way battle for power between Jon, Cersei, and Dany.

That goodwill went out the window in season 8. Cersei, the most powerful woman in Westeros, spent most of the season staring out a window in the Red Keep. Sansa appearing to thank her rapists for helping her become stronger—a sentiment of “my past helped me become who I am today”—was tone-deaf. Missandei was underdeveloped as a character and killed solely to motivate Dany. (Not for the first time, Missandei’s death had some critics wondering what it might look like if more people of color were in the writers’ room.) When Brienne and Jaime finally give in to their feelings for one another, she’s shown begging Jaime to stay just a few scenes later. When Bran is offered the Seven Kingdoms in the series finale, fans wondered why Tyrion didn’t offer it to the more qualified women on the Great Council first. Game of Thrones has very few female friendships within the show—and even fewer of them between women on an equal footing.

Critics have also, more than almost anything this season, taken issue with Dany’s ultimate turn into a tyrant and subsequent downfall. Not that it happened—there is certainly groundwork in ASOIAF to indicate that Dany’s tragic end will also happen in the books—but how the writers portrayed it. The show seemed to rely on foreshadowing and callbacks versus character development or scenes of men talking about Dany rather than us getting any of that information from Dany herself; one scene literally had Tyrion Lannister and Varys discussing how much more temperate Jon was and how he’d be an easier sell to the lords of Westeros. (Which, intentional or not, harkens to how political writers often portray female candidates for public office.) When Dany does die in “The Iron Throne,” it’s invoked with the overused trope of Jon cradling Dany’s body in his arms.

Benioff and Weiss spoke with Entertainment Weekly ahead of season 8. While a quote about how Benioff planned to get drunk the night of the series finale resurfaced as criticism against season 8, another quote always stuck out to me.

“I’m hoping we get the Breaking Bad [finale] argument where it’s like, ‘Is that an A or an A+?’” Weiss said. “I want that to be the argument. I just wish we found better directors for it.”

Weiss clarified that while he and Benioff trusted their directors, they had some very particular things in mind for the finale and didn’t want to get in the way of any director who they could’ve hired, so they chose to take it on themselves.

As a directed episode of television, “The Iron Throne” is perfectly fine, even if one of the shots featured in it did get shredded to bits online; if anything from Game of Thrones season 8 is going to be given awards for directing, it’s probably going to be the episodes helmed by Miguel Sapochnik. Every time I had to cite that interview for something I was writing and came back to that quote, the same thought popped in my head: You could’ve hired a woman—any woman—to direct it.

I’m not calling for a remake of Game of Thrones season 8, of course. But still, I wonder how, if more women had written or directed Game of Thrones, they might have handled Dany’s downfall, what they might have done with Cersei, or Sansa, Arya, Brienne, and the many fascinating characters that Game of Thrones brought us over the past eight seasons. How would things have been plotted out? What would change? Having more voices and more perspectives in a room to tell the best possible story is almost always a good thing.

Now Benioff and Weiss are working on a Star Wars trilogy, and given how they’ve written women over the years, not to mention their previous hiring practices, they’re poised to fit right into a franchise with similar longstanding complaints.

HBO has made efforts to be more inclusive behind the camera, and showrunner Damon Lindelof has said that “Hetero White Men like myself are in the minority” in the Watchmen writers’ room. The Game of Thrones prequel series set during the Age of Heroes, which is still in the pilot stage and has recently begun filming, will have women in charge: Jane Goldman is the showrunner and wrote the pilot (which Martin received a story by credit on) while S.J. Clarkson is set to direct. (Its cast is already more inclusive than Game of Thrones was, another consistent criticism the show has received over the years.)

Will there be another TV show as culturally all-encompassing as Game of Thrones? There might be. But if another show is destined to eclipse its shadow, I only hope that it will look much different.

Subscribe to 2 Girls, 1 Podcast in your favorite podcast app.

Need more news from beyond the Wall? Sign up here to receive our weekly Game of Thrones newsletter from in-house expert Michelle Jaworski. The HBO series may be over, but the franchise isn’t going anywhere.