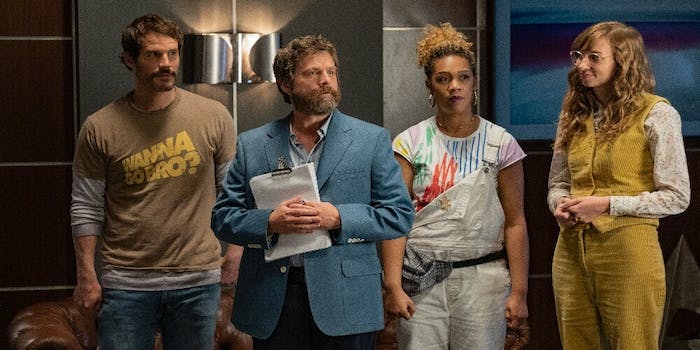 ‘Between Two Ferns: The Movie’ is hilarious. What else do you need to know?

The most important thing you need to know about Between Two Ferns: The Movie is that it’s hilarious.

Between Two Ferns: The Movie

I mean, funny from the opening shot all the way through to the end of the credits. I took almost three pages worth of notes while watching it, but as I look over them it turns out I just wrote down a bunch of the jokes. It’s a ridiculous movie that revels in its silliness and it’s infectious. Most people will look at Between Two Ferns: The Movie and ask themselves the same question: “they made a movie out of this?” This being the Funny or Die talk show series created by Scott Aukerman, B.J. Porter, and hosted by Zach Galifianakis.

For those that don’t know, Between Two Ferns is presented as a public access talk show. The set is bare, Galifianakis and his guests each have a chair, and they’re flanked by two ferns. Galifianakis peppers the guest with insults and oddball questions. They trade barbs and then it’s over. Brad Pitt, Charlize Theron, Bruce Willis, Michael Cera, Hillary Clinton, and Barack Obama have all had a turn between the ferns. The key to the success of the series is that it never overstays its welcome. With 21 episodes spread out over 10 years (the last one, featuring Jerry Seinfeld, debuted in June 2018), Between Two Ferns has sustained the one-joke premise of the series. Now, Aukerman and Galifianakis are pushing the premise to its limit with Between Two Ferns: The Movie.

“What do you got? Besides two ferns?”

Matthew McConaughey asks Galifianakis that question in the opening scene of Between Two Ferns: The Movie. With the checkered history of sketches making the leap to feature-length, viewers are wise to be wary. Aukerman and Galifianakis may be wary too, or at least they anticipate the audience’s trepidation. At its core, The Movie gives the people what they expect from the series, with a battery of celebrities popping up, including Brie Larson, Chance the Rapper, Will Ferrell, and too many others to mention. But the script expands the world of the show just enough to force it, and Galifianakis, slightly out of their comfort zone. The opening-scene McConaughey interview ends in the destruction of the Two Ferns set. Roll opening credits, where you’ll note the screen’s letterboxed format expanding to fill the frame as The Movie appears on-screen.

Not knowing what is next for him or the show, Galifianakis meets with Ferrell at his Funny or Die headquarters. The meeting ends with the two striking a deal: If Galifianakis delivers 10 celebrity interviews, Ferrell will give him his own network talk show. So Galifianakis hits the road with his producer, Carol Hunch (Lauren Lapkus); his cameraman, Cameron “Cam” Campbell (Ryan Gaul); his sound mixer, Boom Boom (Jiavani Linayao); and the two ferns in tow. From there, Between Two Ferns runs through a bunch of interviews, but each one is brief. We get a few punchlines and then the crew is off to the next stop.

Aukerman and Galifianakis strike just the right balance of giving the audience what it wants and then going in different directions. The structural foundation of the story is Galifianakis’ desire to be taken seriously as a talk show host. Fictionalizing the show’s history, we learn that Ferrell stumbled across early Galifianakis videos and put them online to embarrass him. Tired of being the butt of the joke and wanting to chase his dream, there’s something of a dramatic engine driving the plot forward. It gives the story a sense of purpose. It’s enough to elevate Between Two Ferns above the fate of most sketch-based features. I don’t think it’s on par with Borat or MacGruber, but it’s in the ballpark.

As Between Two Ferns evolved from an internet pastiche to something that a sitting president participates in, it has remained delightfully lo-fi. The same gags still work. The chyron typos, the absurd put-downs, the reactions of the guests, it all still gets a laugh. That probably says something about me, but I don’t know: Seeing Jon Hamm’s name listed as “John Hamb” or Creed star Tessa Thompson asked what Scott Stapp is like just cracks me up. Like the web shorts, Between Two Ferns The Movie doesn’t overstay its welcome. It’s less than 85 minutes long and it moves fast enough that you won’t get bored. Between Two Ferns: The Movie isn’t a great movie, but it is great at being what it wants to be. The hit rate of the jokes is high, the parade of celebrity cameos is non-stop, what more can you ask for?