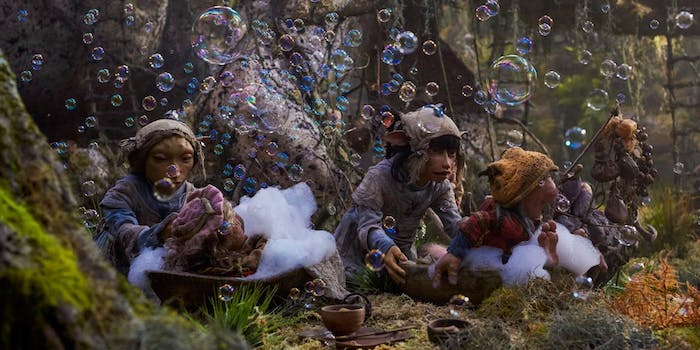 It's a rare break in a show that goes beyond our world.

About three-quarters of the way through The Dark Crystal: Age of Resistance’s first season, the show takes a step back from its immersive entryway into the world of Thra to put on a show.

With the exception of an introduction to Thra itself and the creatures who inhabit it at the very beginning in a Sigourney Weaver voiceover, Age of Resistance wastes no time throwing us into the inner-workings of Gelfling politics, Skeksis trickery, and the bigger pieces at work. It’s a lot to take in at once, but the show trusts in its audience to keep up. By the time that Rian, Brea, and Deet (Taron Egerton, Anya Taylor-Joy, and Nathalie Emmanuel) arrive at the Circle of the Suns—a task assigned to them by Mother Aughra—with Hup (Victor Yerrid) and Lore, they’ve already suffered countless loss. They’re all prepared for the dangers that might await them, but the reality is far stranger than the fantasy could’ve been: a Skeksis and Mystic, living together.

The Heretic (Andy Samberg) and the Wanderer (Bill Hader) are a very odd couple. They’re two halves of a single urSkek, but unlike every other Skeksis we’ve met to date, the Heretic actually wants to rejoin with his other half. The Heretic is frantic and bombastic creature who is easily annoyed by the slow and calm nature of his other half, but the two balance each other out. Although Age of Resistance shows us very little of the Mystics, the Heretic already stands out from the rest; for one, the Heretic sent them the message that said he knew the key to ending Skeksis power after he and the Wanderer received a vision several hundred trine (essentially a standard year on Thra) ago.

It’s a lot for the Gelflings to take in. The Heretic and the Wanderer have a surprise for them, which initially sounds like every single story that ends with a villain betraying the trust of the heroes. But they really do have a surprise, one that provides Age of Resistance’s most meta moment.

“We come to the reason you are all here,” the Heretic says. “The key you seek is the solution to all of our travails… Brought to life by that most ancient and sacred of arts.”

Rian, Brea, Deet, and Hup all visibly groaned in response before watching the Heretic and the Wanderer put on a puppet show.

Yes, in a show with puppet characters, there is a scene of puppets putting on a puppet show. Like that Podling getting ready for the day in the opening minutes of the second episode, it’s a wonder to watch. It looks intricate and your mind starts spinning as you wonder the logistics, but you never fully fall out of the tale that the Heretic and the Wanderer are trying to tell.

If you’ve seen the 1982 film, you already know some of the backstory: It invokes the urSkeks splitting into two and how the Gelfings uniting as one would play a role in reuniting them, even if it doesn’t give us the prophecy that Jen will eventually hear about.

It’s self-referential in a way that The Dark Crystal universe rarely allows itself to be; while played for laughs, it doesn’t break the fourth wall as many of the other the Jim Henson Company’s puppet and Muppet properties do. But for the briefest of moments, Age of Resistance comments on itself and the story it’s trying to tell.

Age of Resistance is far from the first show to tell a story bigger than itself—or one to allude to how those stories are told. For instance, both Game of Thrones and Black Sails offer different commentary on the power of stories in their respective worlds with varying degrees of effectiveness on the message delivery. Age of Resistance is ostensively a children’s show no matter how many older viewers tune in. It’s also nowhere near the first children’s show to tell its story for everyone and refusing to shy from some of its darker themes without succumbing to grittier instincts. Just look at Adventure Time, Steven Universe, and Avatar: The Last Airbender for a small selection of animated shows, which are often dismissed and scrutinized because they’re animated shows for children versus explicitly adult animated series.

That doesn’t mean that Age of Resistance isn’t also for adults enticed by nostalgia for the original film. With its hold on the audience, Age of Resistance uses its tools to reel us in. It just happens to be with “that most ancient and sacred of arts.” And the beauty of it all? It’s all right there in the story—even more so in the puppetry.