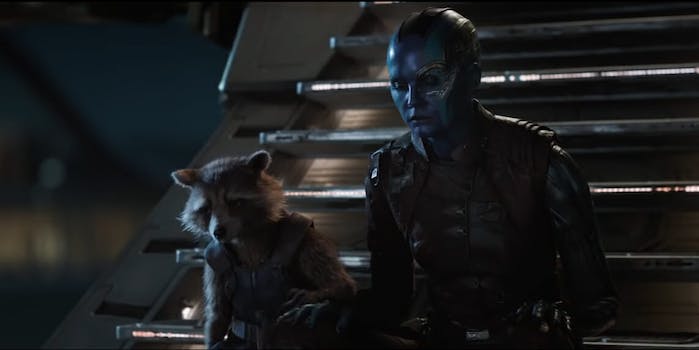 If anyone hates Thanos, it's this blue-skinned assassin.

Let’s talk about Nebula might bring to Avengers: Endgame. The half-cybernetic assassin has a long and complicated history. Her connections to Thanos and Gamora have made her a staple in the Marvel Cinematic Universe. Her blend of humor and unrelenting rage won over many fans as she slashed her way through Guardians of the Galaxy. She came closer to joining Starlord’s motley crew after the events in Guardians of the Galaxy Vol. 2, but Thanos—as he tends to do—got in the way.

With the looming release of Avengers: Endgame, it’s time to take a look at what exactly Nebula is capable of. Could this blue-skinned assassin really be the one to take her adoptive father down?

By this point, even a casual MCU viewer has gotten a glimpse of Nebula. She’s made an appearance in three Marvel movies so far—Endgame marks her fourth—and her character has only grown more interesting with each film. 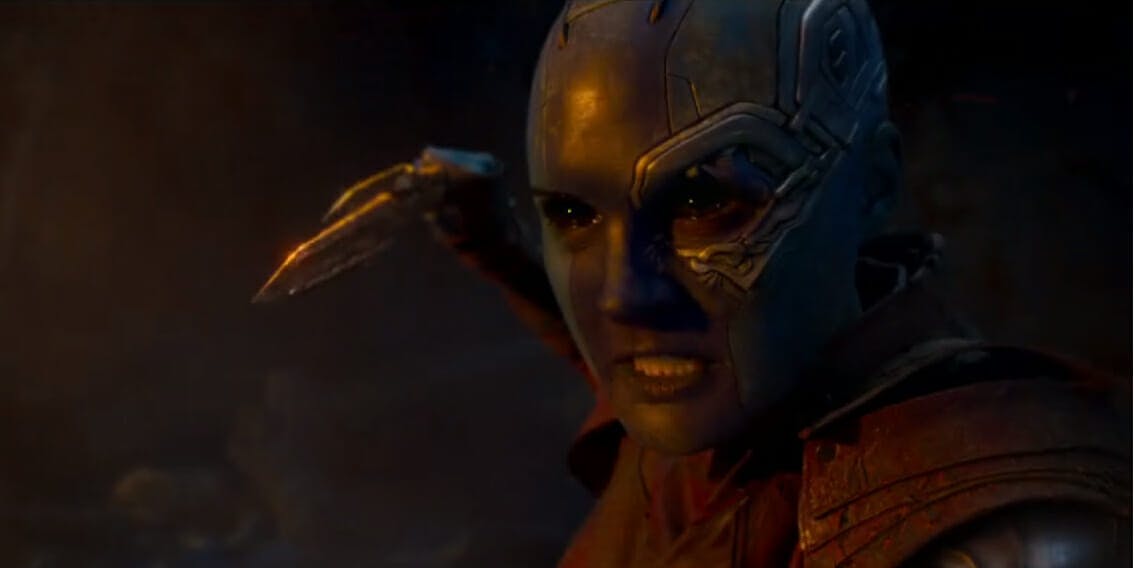 Nebula is a Luphomoid. The blue-and-purple-skinned race resembles humans, apart from their lack of pupils or hair. As far as we are aware, in the MCU timeline there are very few—if any—Luphemoids remaining, apart from Nebula. According to characters in the comics, their planet was destroyed, leaving very few of the race alive.

It is unclear how many of Nebula’s spectacular abilities come from her origins, and how many come from the numerous enhancements that Thanos made to her physical form over the years. Nebula has displayed strength far beyond that of a human, as well as an absolutely stunning ability to take a hit. She is a trained assassin—and one of the most capable killers in the galaxy. Plus, she has a real knack for throwing spaceships at her family members.

One of the most defining aspects of Nebula’s personality is her hatred for Thanos. The powerful purple Titan considers Gamora and Nebula his “children,” yet he tormented them through much of their childhoods. After he’d murdered their families and kidnapped them, obviously. He bred in both of them a ruthless desire to compete, continuously pitting them against one another. The films aren’t clear about the age difference between Nebula and Gamora, but it’s obvious that Nebula is a little sister.

Despite Nebula’s impressive power portfolio, she could never best Gamora. Throughout their childhood, Nebula was repeatedly defeated by her sibling. Each time she failed to come out on top, she received an “upgrade” from their loving captor Thanos. By the time we met Nebula in Guardians of the Galaxy, less than half of her original body remained.

This tortuous upbringing bred in Nebula a deep and pervasive resentment for her sister. She revealed her feelings to Gamora in Guardians of the Galaxy Vol. 2 after the two were reunited. “You were the one who wanted to win, and I just wanted a sister,” she said. “You were all I had, but you were the one who needed to win. Thanos pulled my eye from my head, and my brain from my skull, and my arm from my body… because of you.”

Eventually, after realizing that Thanos tormented and manipulated both of them, Nebula let go of her grudge against Gamora. She vowed to use every ability she possessed to track down and kill their adoptive father. Unfortunately, as we saw after Thanos captured and further tortured Nebula in Avengers: Infinity War, she still wasn’t strong enough.

There aren’t many characters in the Marvel Cinematic Universe who can boast a power portfolio as impressive and diverse as Nebula. As a Luphomoid, she has greater physical strength and fortitude than a human. It is her ability to take a hit that really defines Nebula, however. Through her three-film run, Nebula has been tortured and electrocuted. She’s fallen from great heights and even took a point-blank blast from Drax the Destroyer’s cannon. Due in part to her extensive cybernetic enhancements, Nebula appears able to endure a devastating amount of damage with little lasting effect.

She is also agile enough to keep up with Gamora and even exchange a few blows with Thanos himself. Her healing ability was on full display in Guardians Vol. 2 when her body essentially re-knit itself following a crash. She also has the ability to fire concussive blasts from her cybernetic right arm.

On top of all of this, Nebula is a trained assassin. She is extremely well-versed in armed and unarmed combat, particularly in the use of her favored weapons: two electrified batons. Several scenes have revealed her proficiency with a gun, as well as her ability to fly just about any ship available to her.

Perhaps most importantly, Nebula has a cybernetic message receiver built into her skull. She used it on multiple occasions to report back to her team. In Infinity War, Thanos used this enhancement to replay Nebula’s memories, ultimately leading to his discovery of the soul stone. We don’t know how this will come into play in Endgame, but it presents some interesting possibilities.

We already know that Nebula has a role to play in Endgame. She has been featured in numerous teasers for the upcoming film, but no one yet knows how involved she’ll be. The Avengers uniform she sports in one shot indicates that she will embrace her new teammates, at least to some degree. Many fans are quietly praying that she will be a permanent addition to the team.

With her sister gone, Nebula can likely claim the title of “the deadliest woman in the galaxy.” Though everyone in this movie hates the Mad Titan, none match Nebula’s level of enmity. If anyone deserves to land the final blow, it’s Thanos’ reviled Luphomoid daughter.