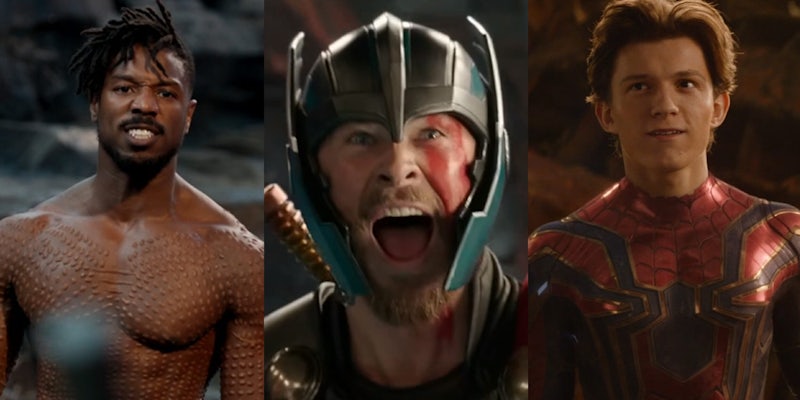 The best Marvel movie memes of 2018

We’ve seen a lot of superhero films in the Marvel Cinematic Universe in the last decade. This summer’s Ant-Man and the Wasp, the sequel to the goofy Paul Rudd-led film, will mark the 20th film. The Marvel Cinematic Universe, or MCU, includes everyone in Avengers: Infinity War—plus the tiniest superhero of them all, Ant-Man. As we get to know these characters over the course of several sequels and crossover films, the internet is gathering the best Marvel memes of 2018.

Several years ago, there weren’t many popular Marvel film memes going around the internet. The Spider-Man films with Tobey Maguire led to some well-known memes like “I’m something of a scientist myself” and Spider-Man taking off his glasses. But now people create memes immediately after seeing a blockbuster film on opening weekend. Discussions about a film lead to quoting favorite lines or scenes, which lead to a joke which then becomes a meme. But not all memes are created right after a new film hits theaters—some people are still meme-ing moments from Spider-Man: Homecoming, which was released almost a year ago.

After watching a movie with really great and/or funny moments, who doesn’t want to talk about it? The best Marvel movie memes act as an inside joke between die-hard MCU fans and new stans alike. Here’s our running list of the best Marvel memes so far.

Captain America appears in the 2017 film Spider-Man: Homecoming in an amusing video that Peter Parker (Tom Holland) is forced to watch during detention. “So, you got detention,” Cap says in the video while looking directly at the camera. “You screwed up. You know what you did was wrong. The question is, how are you going to make things right?”

In May, a screengrab of the video, which shows Captain America looking at the camera, became a meme. People paired it with a caption that mimicked the original video. Playing off the original detention message, the memes are usually about a person doing something wrong.

There were many edits and references to other memes, like Distracted Boyfriend.

And the “don’t talk to me or my son ever again” meme.

Black Panther‘s ‘Is this Your King?’ Meme

Black Panther dominated the box office when the Marvel film was released in February. It also dominated the internet—social sites were filled with Black Panther memes and jokes. But the biggest meme to come out of the critically-acclaimed film is one that references a line villain Erik Killmonger (Michael B. Jordan) says while battling the Black Panther/T’Challa (Chadwick Boseman).

“Is this your king?” he yells out to the people of Wakanda.

Twitter user @TheyWant_Nolan turned that line into a clever pun during the first week of Spring, which still felt like Winter on the East Coast. She posted a screengrab of Killmonger during the “Is this your king?” scene, along with the caption “Is this your Spring?!?!?”

The tweet launched a popular Twitter meme that people used to express disappointment over someone or something not living up to a set of expectations.

The meme format also saw some great edits, like this one that depicts Killmonger as a Lush employee:

Avengers: Infinity War inspired memes before the film hit theaters. Once people saw the posters for the film, which showed seemingly every Marvel comic book character in existence, jokes about Infinity War began. Is the film, which features Thor, the Hulk, Spider-Man, Black Panther, and several more characters, the most ambitious crossover event in history? The internet says no, there are other more ambitious crossover events in pop culture.

Even celebrities like Paris Hilton participated in the meme.

Once Infinity War was released, the memes continued. Two big memes took over Twitter in late April and early May. The first one shows different characters in pop culture disintegrating, as a reference to the ending of the film when Thanos wipes out half of the population in the universe.

Sometimes this meme is paired with the heart-wrenching line “I don’t feel so good,” which Spider-Man (Peter Parker) says to Tony Stark at the end of Infinity War as he turns into dust.

The other popular Avengers: Infinity War meme involves Doctor Strange’s sidekick, Wong, who appears for a few scenes at the beginning of the film. After Strange is captured by Thanos’ henchmen, Ebony Maw and Cull Obsidian, Wong announces that he is leaving to protect the New York Sanctum. He then disappears through a portal, never to be seen again during the course of the film. The rest of the Avengers team up to fight supervillain Thanos. Wong’s decision to stay home was smart—and the internet deeply related to it. Memes of Wong in Infinity War show him happily staying away from all the action.

A promotional photo of Wong was also used as a meme.