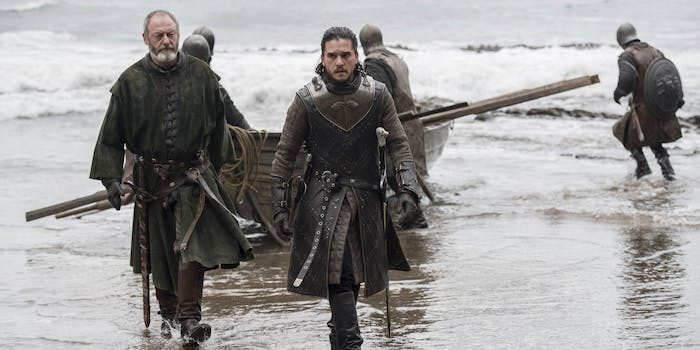 The many layers of their first meeting.

Warning: This article contains spoilers for the most recent episode of Game of Thrones, “The Queen’s Justice.”

After seven seasons of waiting—and growing expectations from fans—Jon Snow and Daenerys Targaryen finally met face-to-face, giving us one of the more layered political encounters than we’ve seen for some time.

Sure, Game of Thrones has always been about political intrigue as much as it’s been about power by violence. And although both Jon and Dany were never meant to play it considering their respective familial circumstances, here they both stand: the Mother of Dragons and the King in the North, finally parlaying with one another. They both came into the meeting wanting something completely different out of it, and while Jon probably has a bigger personal victory than Dany so far, they’re far from done with each other.

Dany wants Jon to bend the knee. He won’t, but he’s not interested in the Iron Throne like Dany is. Naturally, this causes a lot of tension between them both. 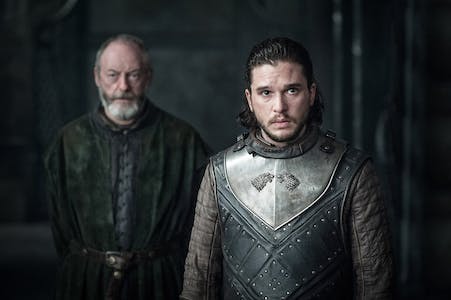 Jon uses “Your Grace” when addressing Daenerys, but she refuses to return the gesture, instead going with a simple “My Lord.” Immediately the meeting is getting off the wrong foot, and the apparent disrespect, which stems from Jon not immediately pledging his allegiance to Dany, drives a stake into any sort of alliance they could forge.

As Dany reminds Jon, the last true King in the North was Torrhen Stark, who bent the knee to her ancestor Aegon the Conquerer to save the lives of his people; she doesn’t recognize Robb Stark’s claim at all, who goes unmentioned for most of the episode. In return, Aegon allowed Torrhen to become Warden of the North. Jon doesn’t acquiesce when Dany offers him the same deal. For the most part, save the Dance of the Dragons, the Targaryens and Starks have coexisted peacefully, at least until Robert’s Rebellion.

Dany’s father, King Aerys II Targaryen (better known as the Mad King), murdered Jon’s grandfather and uncle, Rickard and Brandon Stark, with fire. Brandon’s death in the books played out a bit differently, but it was still at the orders of Aerys. Jon’s presumed father Ned helped Robert Baratheon overthrow the Targaryens and ultimately put Robert on the throne. Dany even speculated that Ned Stark had a hand in some of the attempts on her life. But as they both conclude, they are both not their fathers. But as a gesture, Dany goes on to ask for forgiveness for what her father did to Jon’s family.

What’s even more interesting in this conversation is what goes unsaid. Though it’s not clear that Tyrion Lannister is aware—though Varys definitely is—Ned Stark stepped down as Robert Baratheon’s Hand of the King rather than take part in a plot to assassinate Dany while she was pregnant with her and Khal Drogo’s child. And although both Dany and Jon had much to say about what their fathers did, they said nothing about the roles other family members had to play. Dany’s oldest brother Rhaegar Targaryen took Lyanna Stark, which helped lead to Robert’s Rebellion; Rhaegar went unmentioned until Dany told Jon later that she named two of her dragons, Rhaegal and Viserion, after her dead brothers.

And it’s an important connection to note, given that Rhaegar and Lyanna are Jon’s true parents, which would make Dany Jon’s aunt. As of right now neither of them are aware of it, but Bran Stark is, and he’s now at Winterfell waiting for Jon’s return.

“I’ve brought ice and fire together”

Melisandre’s plan worked: Her conversation with Dany helped Jon Snow’s path cross with hers. As far as she’s concerned, her work is done.

“I’ve done my part,” she said to Varys. “I’ve brought ice and fire together.”

The Prince That Was Promised goes almost entirely unmentioned throughout the entire episode, except for a few hints in conversation between Varys and Melisandre. She saw that both Jon and Dany have a role to play before the end, but so does she, and while Melisandre will soon depart for Volantis, she plans to return to Westeros once more before she dies.

On the surface, ice and fire are simply referring to the meeting of House Stark (ice) and House Targaryen (fire). But, for those versed in prophecy, it’s another nod at one we’ve seen get a lot of attention this season already.

The players in Game of Thrones have often talked about the game, but the name of the book series on which it’s based is namechecked far less frequently. Here Melisandre alludes to it, though she stops short of citing the song of ice and fire. In the books, the song is part of the Prince That Was Promised prophecy, which Rhaegar mentioned shortly after the birth of his son Aegon.

Does this mean that Jon and Dany coming together will be the song? It’s unclear, especially given their first impressions of each other. However, it wouldn’t be the first time ice and fire collided given Jon’s parentage. Dany’s and Jon’s ancestors once made a Pact of Ice and Fire during the Dance of the Dragons, which was an agreement that promised a Targaryen princess would marry into the Stark line. It never came to pass during the Dance (and might not be a thing in the show), but it’s possible that Jon and Dany could, however inadvertently, one day fulfill the promises their ancestors once agreed upon.

Of two bastards, White Walkers, and a knife in the heart

Dany, for obvious reasons, doesn’t really believe Jon when he says that White Walkers are coming for them all. But in the end she allows Jon to mine the dragonglass at Dragonstone, which she didn’t even know resided in her new home until Jon told her, because at least it’ll keep him busy from plotting against her.

That’s in large part because of Tyrion, who can speak for Jon and his honor. They last crossed paths in season 1, but they still have affection for one another, something lacking in many parts of Westeros these days. Without Tyrion at Dany’s side, Jon’s plea for help might’ve been dead on arrival, but Tyrion knows Jon is telling the truth. He hasn’t seen the things Jon has, but despite words of wisdom from all of Jon’s advisors to not travel to Dragonstone—even Tyrion would’ve advised against it—Jon is there to ask Dany for help anyway.

“I’d very much like to believe that Jon Snow is wrong,” Tyrion said. “But a wise man once said that you should never believe a thing simply because you want to believe it.”

And while Tyrion might chalk it up to “their flights of fancy,” Dany definitely picked up on Ser Davos Seaworth revealing that Jon “took a knife in the heart for his people.” For now, Jon is keeping the fact that he died and was brought back to life close to him, and for good reason. It’s not really something you can bring up casually, even if it would help his cause. It’s also not really a simple slip, and Dany won’t forget it easily.

As long as the wights and White Walkers are around, they’re Jon’s sole focus. Any long-term plans for his rule as King in the North once they’re defeated are unclear. (Would he be content staying in the North, or would he eventually make a pull for the throne?) Soon, he’ll have to decide what side he’s on, possibly as early as the next episode if the previews are of any indication.

Jon and Dany’s first major encounter was one for the ages. Their next one will be even more vital.