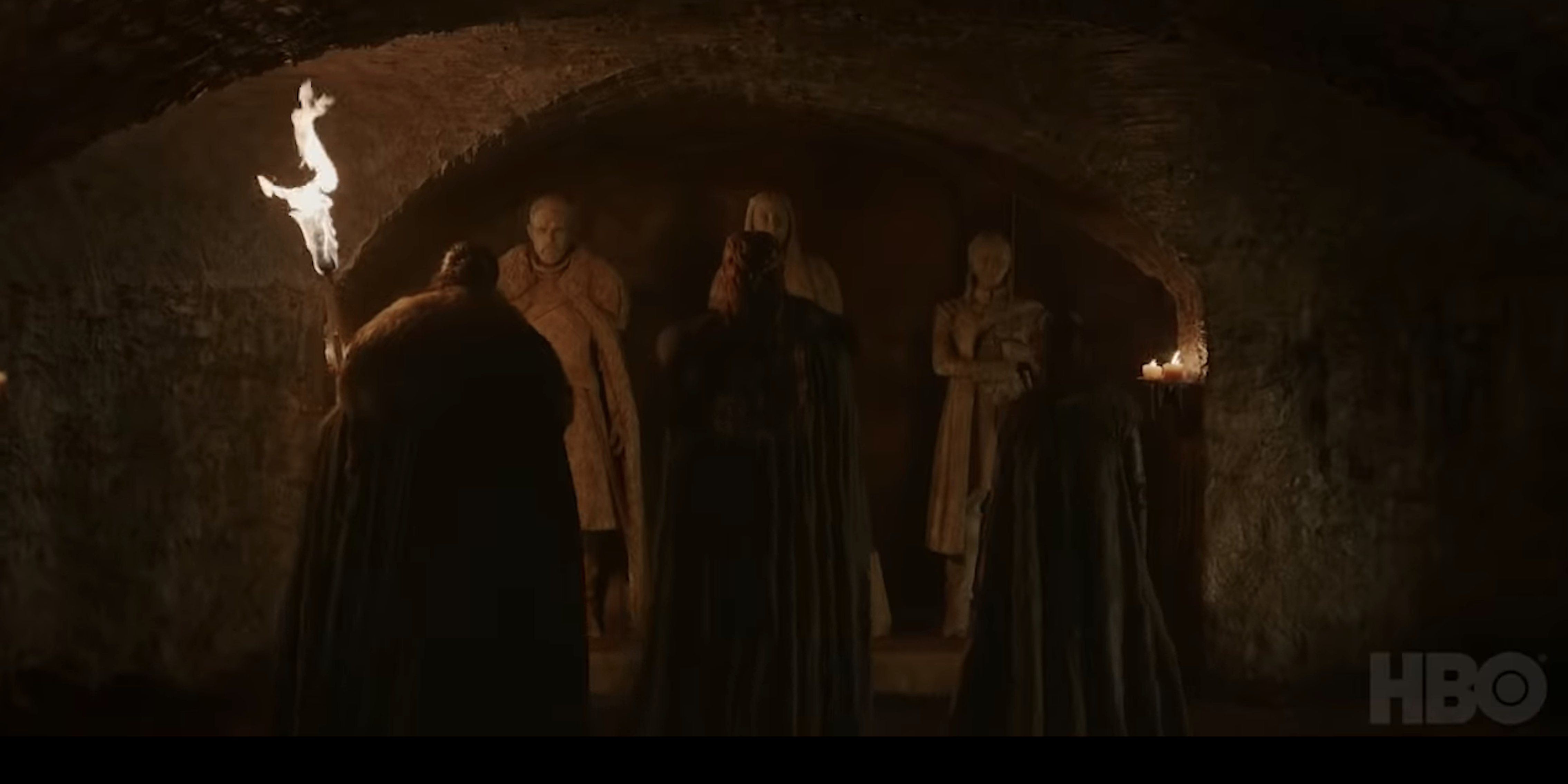 What part of 'Army of the dead' did you not understand?

In the latest episode of Game of Thrones, we’re told that all the children, and those unable to fight in the upcoming battle, are going to be hiding in the crypts of Winterfell. The crypts, you know, the huge underground spiraling chamber where the Starks lay their dead to rest. Sounds like a creepy place to hang out at the best of times, but there might a bigger problem. A much bigger problem.

The Night King is on his way to Winterfell with his army. An army he created using his supernatural power to raise the dead. Think about that for a minute. Do you see it now?

Yup, that’s right, many fans believe that when the Night King shows up he’s going to reanimate a crypt full of dead Starks, killing all the most defenseless citizens of The North. People put there by their rulers who naively thought they were protecting them. Oh, the irony.

The blood-chilling theory has been all over the place since Sunday’s episode and has since become a meme.

When you realize that Lyanna Stark is buried in the crypts of Winterfell and the army of the dead is standing right outside. I might be overthinking this, but…. #GameofThrones pic.twitter.com/SQPKywmwSi

THE CRYPT IS THE SAFEST PLACE IN WINTERFELL! pic.twitter.com/fjsWNzn6BT

Seriously no one in Winterfell foresees an issue with hiding everyone in the crypts from an army that raises the dead?

Dany in trailer "the dead are already here" oh damn#GamefThrones

Someone in my GoT GroupMe just said she knows what Arya is running from; The night king raises all of the dead in the crypts of Winterfell, and she’s going to have to fight her family.

To add a little weight to the theory, many people pointed out that there’s no way the crypts could be safe precisely because we hear so often that they are.

When everyone repeatedly mentions how safe the crypts are #GameOfThrones pic.twitter.com/1MsPNW6e3b

I really loved the subtle foreshadowing in #GoT last night.

No place in Winterfell is safer than the crypts.

All the women and children are in the crypts, because of how safe they are.

Nothing will happen to them down there.

The safest place in Winterfell.

So what are the odds that this theory is true?

Well, as we saw at Hardhome, the Night King doesn’t have to be particularly close to raise the dead, but what his actual “range” is we don’t know. An earlier trailer shows a very frightened Arya running through the crypts at some point. Arya is now the calmest and collected character on the show. If she’s panicking, that’s not a good sign. In the trailer for the next episode, we also hear Daenerys say: “The dead are already here.” That can’t be good.

And of course, let’s not forget this teaser trailer from way back in January, which actually shows the Winterfell crypts icing over:

On the other hand, Winterfell was constructed by Bran the Builder (not to be confused with Bran the creepy). Could he have included spells to ward off the White Walkers as he did with The Wall? That seems reasonable, although it doesn’t explain the frost rolling into the crypts as we saw in the trailer. We also know from Maester Luwin that there are secret tunnels in the crypts that can be used to escape. Of course, that also means there are secret ways in.

Perhaps the biggest question is, if the theory is true, how did no one on the show see it coming? Jon fought the army of the dead plenty of times now, Sam is supposed to be smart, and Bran knows more about the Night King than anyone. Seems like a pretty big thing for everyone to miss.

So are we going to see a shambling zombie Lyanna Stark strangle the life out of poor Gilly or not? I guess we’re all going to have to wait until Sunday to find out.