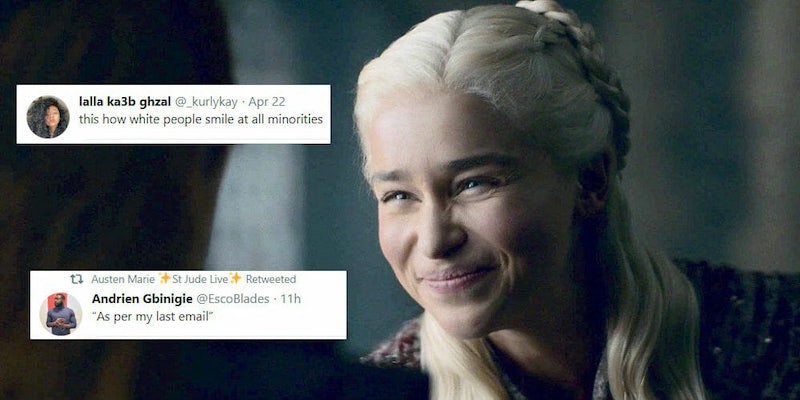 Everyone knows this face.

It was the moment many Game of Thrones fans were waiting for: Daenerys and Sansa finally met face-to-face. And now Daenerys’ relatable, passive-aggressive smile in that meeting has been turned into a meme.

Everyone at Winterfell prepared for a deadly standoff against the White Walkers in the latest episode of the HBO series. Two of the series’ most powerful women–Daenerys and Sansa–faced off in a more civilized manner: through passive-aggressive banter. The moment was ripe for meme making.

On Monday, Twitter user @reallyhalalfood posted a screenshot of Daenerys’ smile, along with the text “Caption this,” letting users have free rein with the moment.

“It happened to be one of my favorite scenes of Sunday’s episode,” @reallyhalalfood told the Daily Dot. “[Daenerys’] laugh and face has 1,000 underlying meanings. Everyone has had it in their lives, and it led to a great moment that I just had to share.”

In fact, Danny’s passive aggression is so relatable that it’s already earned nearly 1,000 comments, its own Twitter moment, and thousands of captioned retweets.

this how white people smile at all minorities https://t.co/RhIKwLMZ8H

Do you draw them by hand or with a computer? https://t.co/RZCK1o76UC

Me: I've been working very hard on my artistic skillset for over 15 years!

Them: ACTUALLY your **talent** is a **gift** and was given to you by **god**!! You have done nothing! Also it's not a skill! Also it's just a hobby and you should drop it and have babies instead!

Per my last email face https://t.co/xKjuwR94u8

when u work in retail n some arsehole tells u its a shame ur missin a lovely day ootside https://t.co/194TsyGq07

“Sorry for the delay! We recently implemented a new invoicing system so could you resubmit your info via this new email address? Should be cleared in 30 days.” https://t.co/eDANTjH8KI

“You speak so well, which school did you go to?” https://t.co/IsEG14pCGT

Anyone who has ever worked retail knows this smile all too well.

I asked for this drink ICED. https://t.co/LW1zk1fGTE

Though only two episodes in, Game of Thrones‘ eighth season has been packed with reunions and first meetings that are nearly a decade in the making.

Viewers have been eagerly awaiting the meeting between the Mother of Dragons and Lady of Winterfell. The two women possess diametrically opposed goals for the future of Westeros–which, of course, becomes irrelevant if everyone is murdered by ice zombies in the next episode.

This season of Game of Thrones has had a strong start with memes. And if anyone survives the next episode’s highly anticipated battle, Danny’s all-too-relatable squint hopefully won’t be the last.