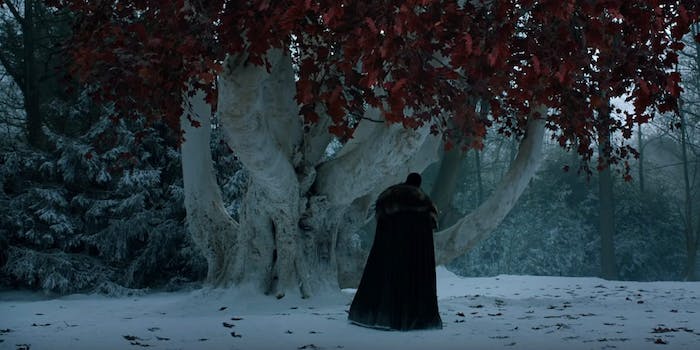 The finer details of the ‘Game of Thrones’ season 8 trailer

After months of patiently (and not-so-patiently) waiting, we finally have a Game of Thrones trailer. Not a seconds-long clip. Not a cryptic tease. Not foreboding animation. The real thing.

As it dropped online Tuesday morning, Game of Thrones’ social media team knew that it needed no introduction.

There’s a lot going on in the trailer, which appears to tease—while revealing very little about—the upcoming climactic battle that will reach Winterfell’s doorsteps in the season’s third episode. Sides are drawn, the forces are gathering together, Jon Snow provides plenty of warning for those about to partake in the fight, and Arya Stark prepares to meet another face that Death wears. Those who cannot fight wait in the crypts and are left to listen to the battle happening above them.

They might have all of the Valyrian steel and dragonglass that they can get their hands on, but that might not be enough.

The trailer reveals tons of new footage—before, we had maybe 30 seconds’ worth at most that mostly focused on Daenerys Targaryen’s arrival at Winterfell—but keeps most of season 8 close to its chest. Until we find out what happens starting April 14, however, there’s more than enough to keep fans satisfied

Game of Thrones season 7 is one that largely ends on the upside for our surviving characters. Although Cersei Lannister finds herself having been abandoned by Jaime after revealing her latest betrayal, Jon, Daenerys, and the Stark sisters are looking ahead to the future. But for two characters up at the Wall, it ended much differently.

Tormund Giantsbane and Beric Dondarrion bore witness to the destruction of the Wall at the hands of the Night King, an undead Viserion, and the Army of the Dead. The way that the final scene was shot, it was unclear whether either of them survived the Wall crumbling down having been on top of it at Eastwatch-by-the-Sea when it happened.

The script for the season 7 finale indicated that both Tormund and Beric made it out alive, but the trailer makes it all but certain: those two fighters will live to see another day. And when season 8 begins, they will meet up with Dolorous Edd, the Lord Commander of the Night’s Watch, who’s currently at Castle Black.

As for whether they survive the season? Their chances are as good as any, but as we’re reminded, now that Thoros of Myr (the red priest who revived Beric on multiple occasions) is dead, Beric’s on his last life.

Who is the blond-haired man on that Greyjoy ship?

Early in the trailer, we see three Greyjoy ships on the sea under cloudy skies. On one of them, a blond-haired man in gold looks down at his troops. Nobody speaks in that scene, but it appears as though they’re gearing for a battle of their own.

We don’t get a look at his face at all, but even though Jaime Lannister is usually the first to come to mind whenever a golden-haired man comes up on Game of Thrones it’s almost certainly not him. Instead, it might be Harry Strickland, the leader of the Golden Company, which is the company of sellswords that Cersei sent Euron Greyjoy off to hire at the end of season 7, and who has been cast in season 8.

Plus, we already catch a glimpse of Jaime later in the trailer. Dressed in darker red than the Lannister house colors uses and black, he’s more than willing to keep up his end of the deal even if his sister is not.

“I promised to fight for the living,” Jaime says. “I intend to keep that promise.”

But we have an even bigger question: Are those ships heading toward King’s Landing so that the men can be presented to Cersei, or leaving it to attack an unsuspecting Jon and Dany?

Cersei Lannister is planning… something. It’s probably not good.

It’s never a good thing for our heroes when Cersei has an unreadable smirk on her face, and this trailer features two of them. She may be mostly alone in King’s Landing now with only Qyburn, a zombified Mountain, Euron Greyjoy, and a nameless army on her side. But don’t underestimate her one bit: Look what happened to Dany’s allies when they did.

Last season, Cersei wanted to use Jon and Dany’s naïveté against them and break their alliance. Cersei’s logic is certainly complicated and it’s still up in the air whether Cersei’s plotting to take over or save her own skin, but one thing is for certain: This lion still has claws.

There are ominous tidings for the Starks

The first part of the trailer is largely framed by Arya Stark, whose voice we hear as we see her running for her life.

“I know Death,” she says. “He’s got many faces. I look forward to seeing this one.”

At an initial glance, things don’t look good for our faceless assassin. She’s fighting with everyone else, but even when the Waif was chasing her, we’ve never seen her quite like this. Bran and Sansa are also keeping watch, wary of what awaits them. Is it all a big setup?

For Sansa, it’s also the matter of who (and what) her brother is bringing home.

Even with Death itself about to arrive, there’s a potentially even larger emotional quandary facing Jon and Dany: that of Jon’s identity. We don’t yet know how Jon will react to the revelation of his parentage and relation to Dany (and he almost certainly will find out), but it’s lingering just on the forefront.

He stands at Winterfell’s weirwood tree like Ned once did. He visits his family at the crypts with Dany following them. The duo even approaches Drogon and Rhaegal, Dany’s two living dragons, who rest near a pile of bones. Is there something more to that shot of Dany’s dragons taking flight?

They’ve got all of the tools and people that they can. But as that last shot hints, it might not be enough.