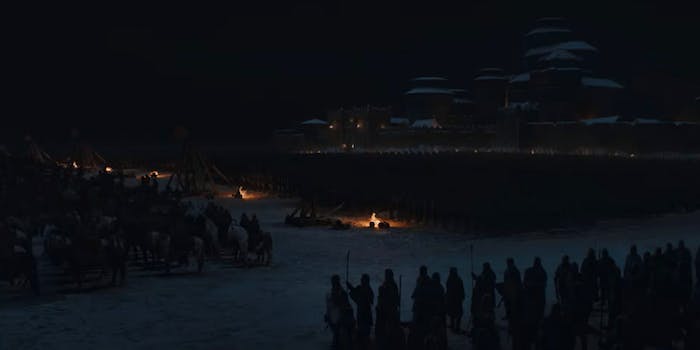 The giant battle episode of ‘Game of Thrones’ is nearly here

Get ready for some bloodshed.

Warning: This episode contains spoilers for Game of Thrones season 8.

For two episodes, the living characters of Game of Thrones have had it fairly easy. They’ve traded barbs and insults, but there’s been very little bloodshed. But with the Night King and his army newly arrived at Winterfell, that’s all about to change.

At the end of “A Knight of the Seven Kingdoms,” the generals arrived nearby. Come next episode, all hell will break loose.

“The most heroic thing you can do is look the truth in the face,” Sansa says in a voiceover.

While previous trailers have given plenty of hints of what’s to come, the next episode—which will be the longest in the show’s entire run—is keeping its cards close. Some of the shots are familiar from previous trailers, such as Grey Worm putting on his helmet and a terrified Arya Stark running down the hall. But now we have a better idea of where some of the living will stand their ground: Beric and the Hound are together, as are Sansa and Arya. Theon has a bow and arrow near the godswood, and Jon looks like he’ll be down on the ground at some point too. And while we didn’t see the Night King and Viserion, they’ll surely be joining the battle as well.

None of this, of course, bodes well for any of the characters we’re still rooting for.

The next Game of Thrones episode will air on Sunday, April 28.