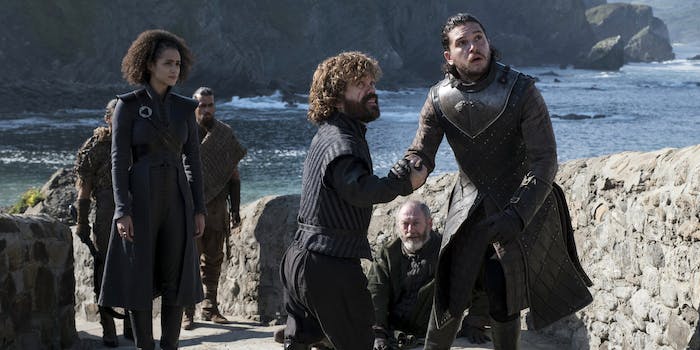 6 ways ‘Game of Thrones’ has changed the real world

The show has already seeped into our world enough to continue being part of it after it's over.

Warning: This article may contain minor spoilers from Game of Thrones season 7.

Game of Thrones is on its way out with its final season arriving in 2018 or 2019, but we’re likely to feel its dragon-sized imprint on our world for years to come.

In one regard, that’s because the series finale is not the last we’ll see of Westeros. George R.R. Martin is still writing two more books of A Song of Ice and Fire and more tales of Dunk and Egg, and HBO is developing five different Game of Thrones prequel spinoff ideas—of which maybe one or two will eventually make it to air. On the other hand, the world (and words) of Game of Thrones have already become so intwined with pop culture that it’s hard to escape it.

Amid the endless merchandise, art, music, and a convention or two, Game of Thrones has already become part of our everyday lives. And with no end to the world of Westeros in sight, we’ll have even more before the final moments of the show.

The many houses of the Seven Kingdoms are identifiable by two things: their house sigil—like a family’s coat of arms—and their house words. House Stark’s is the most well-known in part because it was a warning more so than a calling card boasting about strength and power: “Winter Is Coming.” House Lannister’s words may officially be “Hear Me Roar,” but some—such as a young Bran Stark—have mistaken them with another well-known phrase, “A Lannister always pays his debts.”

If you look beyond house words, you’ll find other phrases uttered in everyday conversation. Old Nan’s “You sweet summer child” can be used to gently chide about someone’s innocence, while “It is known,” told to Daenerys Targaryen by her Dothraki handmaids, is a way to iterate something that’s already a touchpoint. Fans have also started using Valar Morghulis (“all men must die”) in conversations as well as “Dracarys,” the command Daenerys gives her dragons when she wants them to burn something (or someone).

You can even go with more specific references. “You know nothing, Jon Snow,” may be Ygritte’s response to much of what Jon says or does, but you don’t need to be Jon to be on the receiving end of it. And there’s some recent additions, like Tyrion’s season 6 uttering of, “I drink and I know things.”

The addictive and frustrating political drama has far too many players, loyalty means everything, and schemers will stab each other in the back for a chance to gain power—all while the small folk get stuck paying for it. If American politics came to mind before the political arena of King’s Landing under the rule of Lannisters, we don’t blame you.

Although references to Game of Thrones in American politics likely didn’t start with the inauguration of President Donald Trump, the divisive political landscape of 2016 and 2017 definitely exacerbated comparisons. (Veep and Arrested Development are commonly referenced too.)

George R.R. Martin compared Trump to boy tyrant Joffrey Baratheon, calling him the “King of America” while former Chief of Staff Reince Priebus was called Trump’s Hand of the King. Both CNN’s Jake Tapper and former Vice President Al Gore compared the many firings and resignations that took place over the summer to the Red Wedding.

In her most recent book What Happened, Hillary Clinton compared herself to Cersei Lannister after seeing how people at Trump rallies called for her to be imprisoned.

Senate Minority Leader Chuck Schumer even called Trump’s proposed Wall “a medieval solution for a modern problem” and a “Game of Thrones idea for a world that is a lot closer to Star Wars” while on the Senate floor.

But just because you might have a passing understanding of Game of Thrones and politics doesn’t necessarily mean your references will work. If you mix up characters and plot points or make a comparison that doesn’t make sense (of which there have been many), fans of the show will make fun of you.

Game of Thrones has common names you’d find in our world as well as fantasy concoctions. To get a good idea, just look at the show’s two main characters: Daenerys Targaryen and Jon Snow.

But out of all of the fictional names in Game of Thrones, it wasn’t Daenerys, or Cersei, or Sansa that broke onto our baby registries. Rather, it was a title: Khaleesi, which is Dothraki for “queen.”

The name first popped onto baby name lists in 2013 after 146 girls born the year before were named Khaleesi. Since then, it’s risen enough in popularity to become the 765th most popular girls’ name in the U.S. in 2016—which, to be honest, still represents a pretty small number. The Social Security Administration says that only 370 people were named Khaleesi last year, which “represents 0.019 percent of total female births in 2016.”

The other big Game of Thrones name to rise in popularity over the show’s run is Arya (in reference to tomboy-turned-assassin Arya Stark), which went from being ranked 942 to 169 during the past seven years. However, the popularity of Arya might not be solely Game of Thrones-related. It’s an alternative spelling of Aria, which was the 23rd most popular girls name in 2016.

The season 7 episode “Beyond the Wall” showed us just where Arya keeps her growing collection of faces. She doesn’t have a hall for them like Braavos’ House of Black and White, so she keeps them in a bag.

During Apple’s most recent product event, the tech company introduced Face ID for the iPhone X. Some saw the uncanny likeness between Apple’s wall of faces and the ones that Arya started collecting.

What Apple does with the faces after the iPhone 8 scans them. #AppleEvent pic.twitter.com/P0ESonNM60

5) Fans are getting “direwolves”—and it’s actually a problem

We might not have the direwolves introduced by Martin in our world (for one, they’re based on an extinct species), but large breeds of snow-friendly dogs—some of which played younger versions of the direwolves on the TV show—have become real-world stand-ins for the fictional wolves.

Unfortunately, shelters have noticed more huskies being abandoned by their owners in recent years, and some suspect Game of Thrones fans are getting the energetic dogs without considering their exercise and grooming needs. Peter Dinklage, who pays Tyrion Lannister on the show, even put out a statement with PETA asking fans not to buy huskies, and he cautioned adopters that they need to make a life-long commitment their four-legged friends.

For those who aren’t ready for pet parenthood, you can donate to wolf sanctuaries or check in on the real direwolves of Game of Thrones; for instance, the Northern Inuit dogs who played Summer and Grey Wind on the show, Odin and Thor, are doing much better than their TV counterparts.

Even now, the pack survives.

Martin created certain words and phrases in Dothraki and High Valyrian in the books, but the bulk of the language we hear on Game of Thrones was created by linguist David J. Peterson. Over the years the number of words he’s created has grown large enough that he has courses for anyone who wants to wrap their minds around fictional languages. He offers Dothraki through Living Language and High Valyrian through Duolingo.