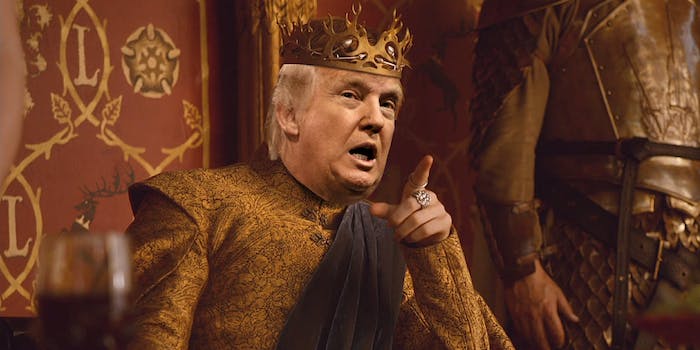 On Sunday night, millions of people will tune into the latest episode of HBO’s Game of Thrones to watch the deadly wheeling and dealing in Westeros.

With all of the backstabbing, political machinations, and drama among allies and enemies on the hit television show, it is inevitable that Game of Thrones would be compared to the current drama unfolding in President Donald Trump’s administration and the country at large.

When you think about it, there are some similarities: a wall meant to keep people out of a country, people turning a blind eye to significant issues, scheming in every level of government, fractions among even staunchest of allies—the list is as long as winter itself. Here are some of the best.

Larry O’Connor, a guest and Mediaite contributing editor, told Fox Business it was “lazy” to compare Trump’s administration to a reality show, adding that Game of Thrones was more apt.

“With all of the shifting alliances and hidden agendas—I think after six months Trump has had it,” O’Connor said, adding that Reince Priebus, Trump’s then-chief of staff, was “the hand of the king.”

.@LarryOConnor: "[The Trump administration] is more like 'Game of Thrones' with all of the shifting alliances and hidden agendas." pic.twitter.com/GBvJPvFiSf

Even members of Congress couldn’t resist the temptation of comparing Westeros to real life before the premiere of the seventh season of Game of Thrones.

Rep. Jamie Raskin (D-M.D.) had a few choice words to compare the Trump administration to the power players of the Seven Kingdoms.

Lying, cheating, colluding with corrupt powers, savaging other people's reputations–some will do anything for the throne. #GameofThrones

Yep, even the New York Times ran a Game of Thrones/Trump comparison—in an opinion article, not a reporter (this is important to note, all you #FakeNews folks out there)—that made some compelling points.

Wicked siblings willing to do anything for power. Secret deals with sworn enemies. The shock of a dead body. A Wall. Foreign bawds, guns for hire, and snakes. Back-stabbing, betrayal and charges of treason. Little birds spying and tattling. A maniacal mad king and his court of scheming, self-absorbed princesses and princelings, swathed in the finest silk and the most brazen immorality, ruling with total disregard for the good of their people.

Trump, it can be argued, is also an archetypical member of the Lannister family: weaned on great wealth and driven by the single-minded goal of boosting his family name. Or you could say that his apocalyptic view of the world is similar to the zeal of the cult of the Red God. For Trump, who sees “a mess” in every issue and chaos lurking behind every corner, the night is truly “dark and full of terrors”—and, incidentally, he seeks to expunge America’s enemies with fire.

Fans of both the book series and TV show have long cracked jokes about Trump mirroring the teenage tyrant King Joffrey—but A Song of Ice and Fire author George R.R. Martin, the series’ visionary and co-executive producer, made it clear: The comparisons are correct.

“I think Joffrey is now the king in America,” Martin told Esquire in May. “And he’s grown up just as petulant and irrational as he was when he was 13 in the books.”

Pilou Asbæk, who plays Game of Thrones villain Euron Greyjoy, was asked by Variety about comparisons that have been made between his character—who makes grand claims to convince his fellow Iron Born that he is the only leader who can lead them to glory—and Trump.

Asbæk clearly didn’t want to make any direct comparisons between his character and Trump, but he had some interesting things to say.

One is a fictional world and one is the real world. Again and again the real world surprises more and terrifies more than the fictional world. To compare Euron Greyjoy to the American president, it’s tough. I did it once in a tweet a year ago. It was a tweet I did for fun. But now the world has changed a lot. I’m not a wise man on the American political situation. I just hope the American people are happy. So I’m not going to compare Euron to Donald Trump. I’m just going to wish you guys luck.

Besides masterfully weaving Trump quotes into some of the major moments of the show, the video is able to touch on Trump’s favorite themes like immigration, loyalty, a border wall, and his own image.

As you can imagine, everyone on Twitter seems to have their own Game of Thrones/Trump metaphor or joke. Here are just a few funny ones:

Theon on #GameOfThrones demonstrating the correct way to abandon ship when it's under attack.

Trump staff, I hope you were taking notes.