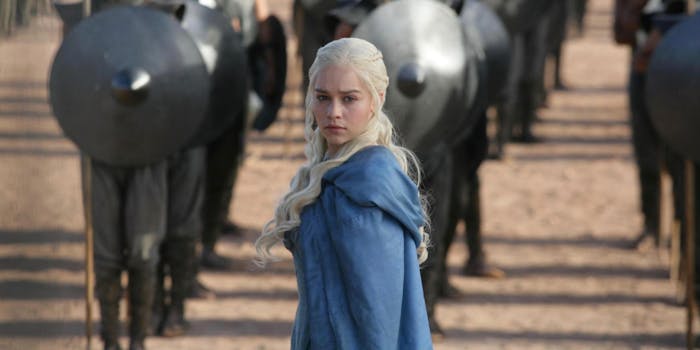 Game of Thrones is full of epic visual effects and great character work, but one of its more successful moments has a bit of both.

In the midst of the show’s third season, Daenerys Targaryen offered Drogon to Kraznys mo Nakloz as payment for all of Astapor’s Unsullied, the slave eunuch soldiers that would create her army. Nakloz had already insulted, mocked, and objectified Dany, assuming she could only understand Missandei’s more polite translations. Daenerys then revealed that she knew exactly what Kraznys was saying about her, and satisfyingly orders the Unsullied to kill the Masters and Drogon to “Dracarys.”

The Targaryens are originally from Old Valyria, so of course she would know how to speak the language.

The Astapor plot demonstrated how Daenerys shouldn’t be underestimated, but for some Game of Thrones fans, it also introduced something else: another fictional language. Valar Morghūlis (“all men must die”) and Valar Dohaeris (“all men must serve”)—phrases created by George R.R. Martin—had already appeared as episode titles. But for this scene, ancient Valyrian had to properly come to life. And more than three years after that scene aired, you can finally learn how to speak it.

David J. Peterson, the linguist who created fictional languages for several shows and films including Dothraki and Valyrian for Game of Thrones, created a High Valyrian language course for Duolingo, making it the second fictional language available for study on the language-learning site after Klingon. Klingon will tentatively launch in August, and High Valyrian is now available in beta. It already has more than 5,000 learners.

Peterson already created a Dothraki course through Living Language, which has been around for a few years now, and even offered a summer college course on designing fictional languages. Making a course for High Valyrian was an entirely different experience. This time around Peterson was his own editor and worked with Justin Mansfield, Nicolás Campi, and Amorena Nobile—three fans of the language—to help craft a functioning High Valyrian course.

The Duolingo course is Daenerys’ version of High Valyrian, the proper form of the language, as opposed to the lower version spoken by Kraznys in season 3. Daenerys understands what Kraznys is saying, but what she speaks and what he insults her in are essentially two different languages. “As different as Latin is from Spanish but also with roughly the same relationship,” he told me.

The course had been in the works for around eight months with Peterson providing updates on its Incubator page. Peterson estimates it contains approximately 700 words in beta but the full course will have around 2,000 words—most which we’ve probably already seen on Game of Thrones.

“I did create a couple words here and there,” Peterson told the Daily Dot. “I don’t remember which ones, but there are a couple thousand words of Valyrian vocabulary [already created] and the course hasn’t even advanced to the most complicated stages. You’re learning lots of different forms of a single word as separate words rather than just learning the entire thing all at once. We didn’t even get to the point where we were even close to exhausting the material that I had already created.”

With Dothraki, Peterson could look to the words and phrases Martin already created in his books and Dothraki culture itself to craft words. High Valyrian presents another challenge. Although Martin has revealed things here and there, Valyria is still a place very much shrouded in mystery. The language prevailed—and much of Essos communicates in lower forms of it—but Valyrian culture largely did not. Westeros has rare and precious Valyrian steel and scrolls about Valyria still exist, but much was lost after the Doom.

That created some lexical gaps—meaning the lack of a word for something in a language—in High Valyrian that Peterson believes should stay there for now. Not only does he not know much about Valyria itself, there’s still much that Martin could reveal in a future book or story that could potentially reveal more information about Valyrian culture.

“For any language that’s spoken by human beings, there are certain elements that human experience is just gonna have in common no matter where they are,” he explained. “And there’s always lots to talk about even if you can’t delve deeply into the cultural underpinnings of a language. So for the High Valyrian that I’ve created, I’ve really stuck to basically what you can get with human experience without delving into the specifics of marriage ceremonies, death rites, and things like that.”

In the Duolingo course, you begin to learn simple words and the mechanics of a language through a series of questions and exercises. It’s designed to be challenging and fun just like any other Duolingo course and will include some common nouns, verbs, and adjectives (including, Peterson notes, a lot of sentences about turtles because he likes the word, qintir).

Early lessons also cover the distinctions of the four genders in High Valyrian, which he says don’t have to do with sex: Lunar, Solar, Terrestrial, and Aquatic, which serve as an important foundation in being able to speak High Valyrian.

Because it’s in beta mode, you’ll be able to provide feedback on the course so Peterson, Mansfield, Campi, and Nobile are able to tweak it and make it better. For example, if you get a question wrong you can explain why you think you got it correct, which could expand the number of correct answers allowed. Or if everyone taking the course is getting a question wrong, they can change or remove the question entirely.

Once you get past the foundations of High Valyrian you’ll be able to learn how to say more complex sentences, which may include some of the phrases and lines you’ve already seen in Game of Thrones.

“For me it always felt like a real achievement like, oh my god, they know enough that they can actually say this line now,” Peterson said. “So I hope it feels that way to them. I’m sure in the beginning it’s going to be a little dry, but most language courses are at the very beginning simply because you have to start somewhere. Everybody starts out learning Je m’appelle Jacque. Same thing with High Valyrian.”

And while the course has a ways to go before it’s marked as “stable” on Duolingo, Peterson sees engagement in any language material—even High Valyrian—to be a huge benefit to anyone who tries it.

“I think it’s a key part of being human, this, just fascination, curiosity with other languages because languages are our greatest invention—bar none,” he said. “Absolutely nothing that human beings have ever accomplished could be done without language. Every single science, every single technological innovation, all of it rests on language.”

And with Game of Thrones’ seventh season about to begin, you might even be able to look back and view some of those episodes in High Valyrian in an entirely new light.