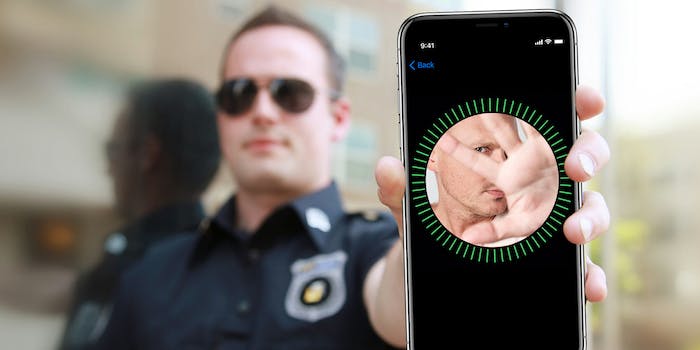 The law is on your side.

Apple on Tuesday ushered in the era of mainstream facial recognition with the launch of FaceID on its new iPhone X.

Face ID replaces the technology giant’s Touch ID on its flagship smartphone, allowing users to unlock their device simply by looking at it.

While there are a bevy of concerns about the widespread adoption of facial recognition technology, one question immediately percolated to the top of the paranoiac mind: Can cops just point your iPhone X at you to unlock it?

The short answer is, no—and “certainly not without a search warrant, at minimum,” says Nate Cardozo, a staff attorney at the Electronic Frontier Foundation (EFF).

The primary legal question around biometric security features like facial recognition and fingerprint scanners is whether the Fifth Amendment can protect suspects and defendants against forced device unlocking. The Fifth Amendment protects people against self-incrimination, but the courts have ruled that it applies to testimony—something someone knows. Your face is not something you know nor is your fingerprint.

“The courts that have looked at Touch ID have largely found fingerprint unlock isn’t testimonial, and therefore it has been compelled (with a warrant) a number of times,” says Cardozo. “Federal appellate courts have not been directly confronted with the issue yet. The legal analysis of Face ID will be largely the same.”

Still, the courts have yet to fully catch up with the legal implications of emerging technologies like Face ID and other biometric security features. “It’s not a settled question whether law enforcement is permitted to compel a suspect or defendant to unlock a phone with biometrics under any circumstances, and no standard has emerged yet,” Cardozo says.

The Supreme Court settled the question of whether a warrant is required to search a suspect’s phone in 2014 thanks to its unanimous decision in Riley v. California.

Of course, we all know police officers don’t always adhere to the law and may attempt to force a person to unlock their device without first obtaining a warrant. In such an instance, there are two factors in your favor.

The first is Face ID’s functionality. The feature will not unlock the phone if a person’s eyes are closed, as demonstrated in this video from the Verge.

The second is the law: Without a warrant, any evidence obtained through the unauthorized search would be inadmissible in court.

If you’re still concerned about the possibility of a rogue cop rooting through your digital life, your best bet is to not use Face ID at all and instead use the phone’s passcode feature, which a police officer would almost certainly not be able to guess (unless you make it 123456 or 000000 or something equally insecure). Even with a warrant, they would not be legally empowered to force you to unlock your phone. And thanks to the iPhone’s full-device encryption, any data on your device would remain outside the reach of police and prosecutors.

“Law enforcement is not able to force suspects or defendants to divulge passcodes, even with a search warrant, because of the Fifth Amendment,” says Cardozo.

While that sounds good in theory, life can play out much differently. Faced with a pushy cop who wants access to your device, a person may simply agree to the search even if the law allows them not to.

“They can refuse and if an officer nonetheless warrantlessly compels them to unlock the device, all of the evidence discovered will likely be suppressed,” says Cardozo. “Of course, it’s extremely uncomfortable to refuse an officer’s demands.”