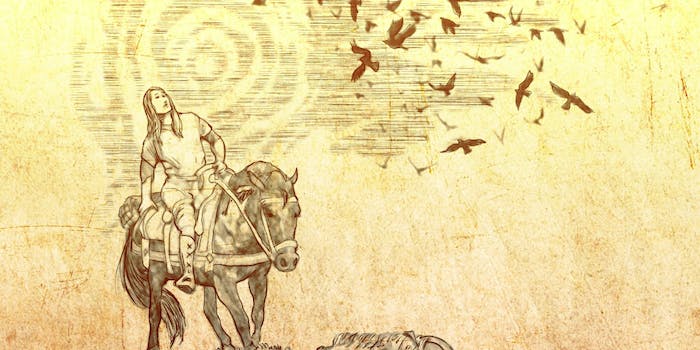 ‘A Knight of the Seven Kingdoms’ collects George R.R. Martin’s tales of Dunk and Egg

It takes place about 100 years before 'Game of Thrones.'

George R.R. Martin has mapped thousands of years of Westerosi history (enough to create a whole book full of it)—stories of powerful rulers, supernatural elements, and even political deceit. But one of his more enjoyable stories to come out of that world just might be that of a lowly knight and his princely squire.

Long before Game of Thrones was a reality, Martin wrote a series of novellas that take place in the same universe as A Song of Ice and Fire about 100 years before the events of A Game of Thrones called The Tales of Dunk and Egg. As the title suggests, the novellas focus on two central characters (although it’s told from one viewpoint) in an ever-changing world—one with trials by combat, a prince in disguise, dreams that come true, petty lordly fights, and even a possible rebellion in the making.

The three novellas to date (with more planned in the future) were published as part of fantasy anthologies in 1998, 2003, and 2010 respectively, but they have since gone out-of-print. Two of the three novellas, The Hedge Knight and The Sworn Sword, are available as graphic novels but otherwise it has been nearly impossible for fans to legally get their hands on the stories in print until now: A Knight of the Seven Kingdoms, released Tuesday, collects the Dunk and Egg stories for the first time, paired with gorgeous illustrations from Gary Gianni on nearly every page.

First, let’s meet Dunk and Egg. (Dunk is the tall one.)

What is it about this unlikely pair that works so well? While this world is mostly devoid of dragons, the imagery is just as vivid and the supernatural elements have a similar subtlety, allowing these tales to stand on their own. (Although they do enhance ASOIAF for readers.) While some fans may complain that this isn’t The Winds of Winter, the Dunk and Egg stories have plenty of merit on their own—and some of those events may even end up playing a part in the books to come. Here are a few more reasons you should pick up the new collection.

Brienne and Podrick. Arya and the Hound. Tyrion and Varys (and later Tyrion and Ser Jorah). Any of these pairings could easily turn into their own comedy adventure, but it’s with Dunk and Egg that we get a satisfying buddy adventure.

A Knight of the Seven Kingdoms is less about the story than the characters.

Dunk, a humble knight originally from Flea Bottom, and Egg, who’s really Aegon Targaryen disguised with a shaved head, balance each other out. While Dunk has brute strength on his side (his skills as a knight are somewhat lacking at this point since he’s pretty new to the job), Egg is often the wits of the operation. They give each other insight (especially when it comes to explaining how things operate in this Targaryen-led Westeros), which can only make them better. They get along most of the time, although Dunk often threatens to give Egg a clout on the head if he doesn’t obey an order. When it comes right down to it, they have each other’s backs.

With Game of Thrones separating families and offering betrayals at every turn, it’s become rarer to see two characters who actually like each other and aren’t just using one another for strategic gain. A trusting nature also doesn’t immediately lead to immediate death in these stories.

Most of the characters in Game of Thrones have a personal stake in who rules the Seven Kingdoms (and how it affects them), but what about the regular people who’ve pledged their loyalty to those lords?

Although the legitimacy of Dunk’s claim of being a knight is debatable, he tries his best to live the life of a true and just knight, things he learned from Ser Arlan of Pennytree, the knight he squired. But even though he pledges his sword to particular lords over the course of the series, he doesn’t always understand exactly the political stakes of their troubles; at one point he called two neighboring houses’ fight over a stream a pissing contest. And even once everything is resolved, there are no real winners.

But because Dunk is so grounded, he can give Egg, who knows nearly everything about the noble families and their ways, a viewpoint different from his own. As Egg develops into adulthood, he is forced to hear what ordinary people think of his family. It’s insight that will eventually (spoiler alert!) make Egg a king loved by the common folk, but not so much by the noble houses. (You can’t win them all.)

We can only imagine how those people have viewed all of the great wars of Westeros.

At 368 pages, A Knight of the Seven Kingdoms introduces you to Martin’s Westeros, but it’s never overwhelming. You’ll see many of the same names and places, but the self-contained stories cover themes as rich as the gargantuan ASOIAF series. Plus the illustrations help visualize the world without any influence from the show.

The Hedge Knight features a tourney worthy of one of Sansa Stark’s early girlish daydreams, a noble act that could cost Dunk his life, and a supersized trial by combat that has consequences beyond just someone’s life. The Sworn Sword looks at feuding houses and their trivial nature, the consequences of war, and what grudges will do to those who hold them. The Mystery Knight shows just how far one exiled house will go to be on top, how little you can trust the people around you, and the presence of Bloodraven, also known as Brynden Rivers, who could easily give the secretive Varys a run for his money.

They’re accessible from the first page and can quickly sweep you up into the heart of the story. And who knows, it could inspire some readers to pick up the bigger books.

Even if you’ve only watched Game of Thrones on HBO, you’ve already encountered Dunk and Egg.

We first come across Dunk in the White Book (also known as The Book of Brothers), the giant tome where every member of the Kingsguard writes his accomplishments. Jaime flips through it in season 4 after he returns to King’s Landing when Joffrey Baratheon notes that Ser Duncan the Tall had four pages devoted to his accomplishments.

And Egg? Maester Aemon Targaryen called out to Egg, his younger brother, on his deathbed while in a feverish state.

Maester Aemon is mentioned by name throughout A Knight of the Seven Kingdoms as he trains to become a Maester in Oldtown during the course of the book. But, as he explained to Jon Snow in Game of Thrones’s first season, he joined the Night’s Watch after he refused the throne so he couldn’t be used to usurp his younger brother.

Egg’s descendants live on today, now mainly through Daenerys Targaryen, Stannis and Shireen Baratheon (who are still alive in the books), Rhaegar Targaryen’s son Aegon (if you believe he is who he says he is), and potentially Jon if R+L=J. But also seen throughout the novellas? There’s Targaryens abound, relatives of many of the families in power today, and a blink-and-you’ll-miss-it cameo from a 4-year-old Walder Frey, who’s irksome to those around him even as a small boy.

While you can read A Knight of the Seven Kingdoms or ASOIAF without touching the other, the two series are interconnected—and not just because they took place in the same universe.

For one, Egg’s descendants may be well documented (and contested), but the matter of Dunk’s descendants is more uncertain. Martin has confirmed there’s at least one, most likely Brienne, who has a shield painted like the one in her father’s armory that’s described similarly to Dunk’s own sigil. Another possibility is Hodor, the great-grandson of Old Nan. Fans believe Bran saw Dunk and Nan kissing in Winterfell through one of his visions in A Dance With Dragons.

But they’re far from the only echos of Dunk and Egg felt in ASOIAF and Game of Thrones. That mainly comes in Bloodraven, a Targaryen bastard who’s influential and powerful to the point where people believe he’s a sorcerer. Regarding Bloodraven—who only lost an eye during the first Blackfyre Rebellion—people often recite the riddle, “How many eyes does Lord Bloodraven have? A thousand eyes, and one.”

He’s also heavily implied to be the Three-Eyed Raven/Crow (and the last living greenseer) that Bran encounters at the weirwood tree beyond the Wall. He was eventually sent to the wall by Egg (after he takes his throne as Aegon V Targaryen) for beheading a Blackfyre who wanted to participate in the council that made Aegon king.

Another theory, leaning on the side of tinfoil, demonstrates how the protectors at the Tourney of Ashford in The Hedge Knight foreshadowed all of Sansa Stark’s suitors to date. She’s been promised to a Baratheon and a Tyrell, married to a Lannister, and is being set up with a Hardying in the books and, as the theory goes, Aegon VI Targaryen could up being another one of her suitors, although the jury’s still out on whether she would marry him.

The most intriguing part of Dunk and Egg’s story is one that may be covered in a future story.

With the publication of A Knight of the Seven Kingdoms, Dunk and Egg’s adventures will now be available to a bigger audience than ever, with the potential for even more theories. So while we’re waiting for any updates on The Winds of Winter, won’t you join them on their next adventure?